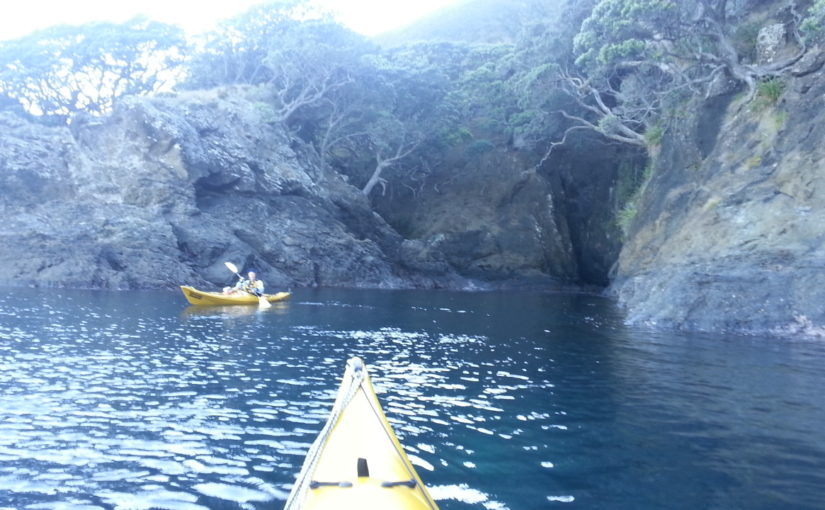 According to the Campermate App, Lottin Point is an unauthorised campsite, and risks an instant fine. We have camped there a couple of times in the past, so we thought we would drive out and have a look to see if there are any “No Camping” signs. There aren’t.


I’m glad we did, because the little bay at the end of a long, narrow and winding road is even more beautiful than I remember. We forded a small stream, then drove on to the rocky beach itself and found a flat spot.

The sky was blue and the sun was beating down, so our first thought was to get in the water with our snorkelling gear. There were lots of fish to see hiding in the seaweed. The visibility was easily 3-4 meters, so it was easy to watch a wide area.

I noticed there were heaps of paua, so I swam back and got my dive knife and a bag. They looked a bit on the small size, so I took three of the biggest ones. Back at the motorhome we measured them to check and they were only just over 100 mm, with the biggest being about 115mm. This is too small to be legal (125mm), so Felicity made me put them back.

After our afternoon coffee, we went for a walk around coast to north. We passed several other groups of campers, most of them keen fishermen. When we looked back at the beach, we realised there was another camping area just over a small headland. I realised it is the Gisborne Fishing Club Camp, where we stayed almost 30 years ago with my two boys, and my ex-wife whose father used to be a member.

While I was admiring the spectacular sunset and eating dinner, I spotted a fin about half a meter from the edge of the beach. Then I saw a second one. Two small sharks cruised up and down the beach several times in the calm, shallow water. Felicity tried to get a photo, but they did not cooperate. They were less than a meter long, so not the sort of shark you would be nervous about.

The water was so calm and sheltered that we made a plan to go for an early morning kayak. I unloaded the boats and we got all the gear ready before we went to bed.

We were on the water soon after 7.30am. The sun hadn’t made it over the hill yet, so it was pleasantly cool out at sea. We noticed a vehicle driving slowly along a farm track on the cliffs above us, then it parked and three fishermen got out and began walking the last few hundred meters to the actual Lottin Point.

We got there first, and paddled out into the golden sunshine to look down the coast to the south before turning around.

The fishermen were also beaten by a pair of fur seals, who were swimming slowly along the edge of the rocks. They noticed us, but seemed more interested in catching breakfast. We paddled alongside them for almost a kilometer. Because the sun was now over the hill behind them, it was too hard to get a clear photograph.

We came to a small beach with a cave, and landed to powder our noses. We were walking around the rocks to check out a second cave when Felicity spotted a big school of bright blue mao mao swimming in the clear water next to us.

It was only 11.00am by the time we got back to the beach, so we decided to have a second snorkel before lunch. I saw dozens of species – as many different varieties as I have ever seen in NZ waters. With the sun almost directly overhead, there was plenty of light to see down deep.

The highlight for me was watching half a dozen sleek kingfish cruising along looking for trouble. As we were nearing the shore at the end I found (and carefully avoided) a small sting ray, which are common in the shallow bays along this coast.

Since there was nobody at our end of the beach when we arrived back, I rigged up the solar shower assuming we would be able to take off our wetsuits and rinse off naked. Sadly it was just ready when two 4WD vehicles bounced across the ford and on to the beach right next to us, forcing us to change into swimming gear first.

I’m sure this is a spot we will return to.