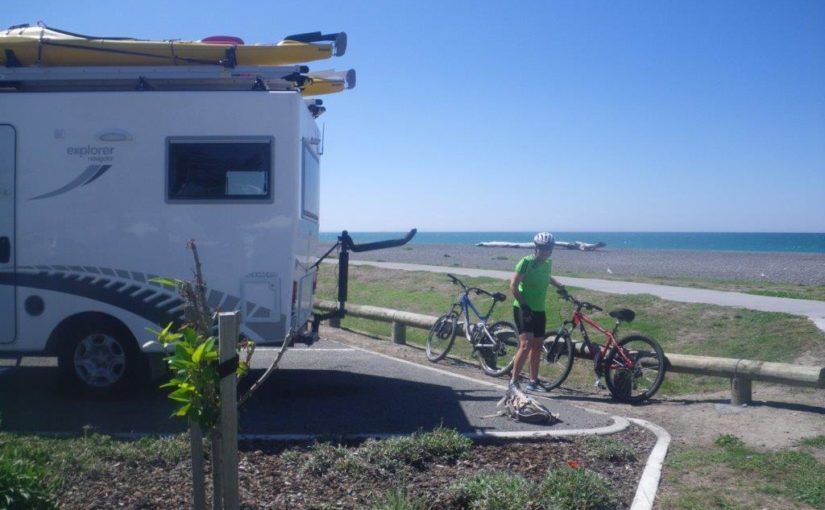 This weekend Felicity’s medical school class of 76 held its 40 year reunion in Napier, so we drove down in the motorhome to attend. We left home on Thursday at 3.00pm, and managed to get across the Bombay Hills, and out of the traffic, in just under an hour and a half.


We spent the first night parked at Hora Hora domain, right on the edge of the Waikato. We had stopped for a coffee break along the way, and it was dinner time by the time we arrived, so we passed up the opportunity to have a swim.

I was glad I didn’t try to drive all the way in one go, because the Napier – Taupo highway can be unforgiving of mistakes. It also mean that we arrived early enough to score a great spot for the night right on the beach just south of town, with enough time to go for a bike ride further on down the coast.

Felicity accompanied me as far as the Ngaruroro River before turning back, but I had plenty of energy and rode inland for another 10km to Taradale. I was glad that the point at which I decided to turn around was where we had begun a bike ride on our last trip to this part of the world.

After a swim and a cold shower, we walked for 20 minutes into town to meet up at the Masonic Hotel for drinks. This pub is a beautiful example of Art Deco, and is filled with lots of interesting old stuff from the early 20th century. I got handed a glass of bubbly as I walked through the door, and being somewhat thirsty ended up swilling it rather faster than is advisable on an empty stomach. I made sure the next couple of drinks I had were non-alcoholic.

We had booked at the Masonic restaurant for dinner, which we could probably have done without if we had been just a little more piggy with the delicious snacks they provided with the drinks. We ordered the “small plates”, which meant about four mouthfuls of (admittedly delicious) food for $17, so we didn’t over-eat too badly.

When Felicity put the jug on for tea first thing next morning, we looked out the window and saw a beautiful orange and pink sky out to sea as the sun prepared to rise over the horizon. The carpark we were in was completely packed with campervans so we were fortunate to have one of the prime spots.

We met the other doctors at an East Pier waterfront venue for breakfast, where I did end up eating a bit more than I needed for a morning sitting in a conference room. There were several interesting and amusing presentations, ending up with a report on a survey of all the classmates that is conducted before every reunion. They had answered questions like “how many prescribed drugs do you take?” , “how many artificial body parts do you have?”, and “how many children do you have still living at home?”

Afterwards quite a few doctors came to admire our motorhome in the carpark outside, where we were eating lunch. We both felt like doing some walking in the afternoon, so we drove to the top of Bluff Hill and walked down steps to the bottom. The track that we had intended to use climbed back up through Sturm’s Gulley, where we discovered a walnut tree laden with ripe nuts. We collected a plastic bag full which is going to be part of tonight’s dinner.

This wasn’t quite enough exercise, so we drove to Westshore and set off on a walkway around the eastury. Some sections were board-walked, and the the section crossing the river utilizes the old highway bridge that has been replaced with a modern, wide version nearby.

We were pretty hot and sweaty by the time we arrived back at the vehicle, so we enjoyed a swim in the sheltered waters of Pandora, followed by a cold shower to wash off the salt. We then drove out to the Ngatawara Vineyard in the famous Gimblett Gravels area, where we had been given permission to park for the night so that I could enjoy their hospitality without worrying about driving.

This vineyard is part of the Corban’s empire, and is situated in what used to be a horse-racing stable. We ate (and drank) outside in a courtyard at long tables, which was very civilised on a warm summer’s evening. After dinner there was a dance band playing in one of the old stables, so we partied until almost midnight when taxis arrived to take everyone home.

When we woke up in the morning it sounded like a small war had broken out, with gunshots coming from all directions. I soon realised that being surrounded by grapevines laden with ripe fruit means that you have to put up with lots of gas-powered bird scarers during daylight hours.

The final activity on the programme was a visit to the Hastings farmers’ market for breakfast. We arrived just after 8.30 when it opened, which avoided being stuck in huge queues of traffic, but meant that we were on our way before any of the other doctors managed to drag themselves out of bed. We purchased as many local delicacies as we could fit in the already stocked motorhome, then enjoyed a freshly squeezed juice and an expensive but delicious whitebait fritter for breakfast.

We looked at the long queues for coffee, and decided to drive back out to the beach and make our own instead. While we were there, Felicity packed lunch then we drove into town to check out bike hire shops. She finds my old Kona mountain bike very uncomfortable, so we were keen to try an upright “cruiser” style of bike to see if it makes a difference.

It seems that it does, because when we arrived at Bayview after an hour or so of riding north, she decided to come the long way back across the wetlands with me. This part of the track starts a small hill which once used to be an island in the middle of a huge lagoon. When the big earthquake happened in 1931 the whole area was lifted almost 2 meters above sea-level, so now it is mostly dry land with drains and a few patches of swamp.

There are a couple of tall wooden towers with beacons on top just north of the airport, that I have always assumed were marking the approach to the runway. It turns out that these towers also used to be on islands, and marked the entrance to Ahuriri Harbour. This is now far too shallow for big ships, so the new harbour and its shipping channel are behind a breakwater south of the old entrance.

After returning the hire bike and having another swim, we drove north up the coast towards Gisborne, and parked for the night beside highway at Tangoio Falls. There was a little bit of traffic noise from time to time, but mostly we listened to the rushing creek and chirping birds.

In the morning we walked up through the bush to see the falls. We were just about back at the carpark when we met one of Felicity’s colleagues who had spotted our distinctive vehicle and stopped to say hello. We plan to try and catch up with them over the next couple of days.