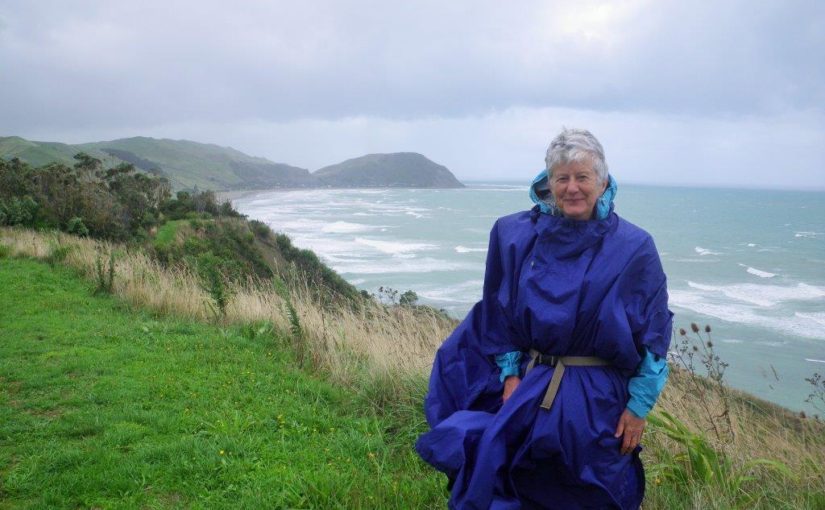 Because we were already inside the Eastwoodhills Abouretum when we woke up, we decided to have another walk after breakfast, and explore some of the areas that we hadn’t visited the day before.

This time we found an almond tree, which I have never seen before. The nuts (or more correctly seeds) were surrounded by a soft flesh similar to a peach or apricot, which are in the same family. Our nut collection is growing!


After an hour or so we decided it was time to see some New Zealand trees again, so we drove to Gray’s Bush Scenic Reserve. This is a tiny patch of unlogged lowland forest, with kahikatea being the dominant tree. There is also a lot of pururi, which is unusual because they prefer dry conditions while kahikatea like swamps. In the past, cattle were allowed to graze the understory, but now they have been removed there are heaps of nikau palms. We walked around the flat loop track in about 40 minutes.

About six kilometers up the road is the Waihirere Domain, where we followed a walkway along a stream up to a small waterfall. I noticed that some of the limestone beside the trail contained sea shells. There was also an abandoned public swimming pool, with small trees growing from cracks in the concrete. A great loss for the local children.

The road to and from the domain had some of the most vicious judder bars I have ever driven over, and the motorhome bounced alarmingly, even at a very low speed. We had just turned on to the highway, when Felicity spotted a fruit stall, so I pulled over while she went to see what was available.

A car travelling in the same direction as us stopped and turned around, but instead of going to the stall, the woman driver suggested I look at the bikes on the back of our vehicle. To my horror, I saw that the strap fastening the bike rack to the vehicle had broken, and the folding steel support had bent over so that the bikes were resting on the ground! It must have just happened, because the bikes were undamaged and the cover was not ripped or torn. I hate to think of the consequences if it had let go when we were travelling at 100 km/hour.

I managed to load the bikes and the racks inside the motorhome, and we drove into Gisborne to look for a mechanic. Fortunately the repair only required that he unscrew the towball so that the folding support could be removed, then screwing it on again so I could reattach the bike rack. He didn’t even charge me.

By this time it was way past lunch time, so we drove to the beachfront and found ourselves a spot with a nice view. This turned out to be a tactical error, because there was a howling gale off the sea, and I had to remove the bikes from inside and fit them back onto the rack before we could eat. The cover nearly lifted me off my feet as I tried to drape it over the bikes.

Later, while Felicity popped into the supermarket for a few minutes, I took the cover off and attached it more securely. One of my elastic bungy cords had snapped and I was walking to the door to get scissors when I dropped it and the clever plastic toggle that holds them together. To my surprise it seemed to immediately vanish into thin air. We were in a sealed car park, and a 30cm long piece of plastic with 100mm of bungy should have been obvious. I was starting to think I was going mad, when I looked inside the mag wheel of the car parked next to us and there it was.

On the way out of town we stopped to explore the Wainui-Makorori Headland walk. The wind was still pretty wild and there was a few spits of rain, so we had to wear our ponchos yet again. The promised view of Young Nick’s Head and Mahia Peninsula down to the south were not as spectacular as we had hoped.

Our parking spot for the night was beside Makorori Beach only a few kilometers further north. Felicity was baking some corn bread in the oven when suddenly we heard a loud explosion like a gunshot come from inside. She had put the chestnuts in to roast and forgotten about them, and it seemed one was slightly overdone.

Sadly, our nut collecting was not as successful as we had hoped. The almonds were incredibly bitter, and the chestnuts didn’t taste particularly nice either, so we threw them away. I suspect the trees were old varieties that are not bred for eating.

We drove on north, through Tolaga Bay, and on to the DOC campground at Anaura Bay. It was getting close to lunchtime by the time we sorted out a scenic parking spot, so we decided to go for walk along the beach. We started towards the northern end, but when I noticed a large dog running loose and unaccompanied about 300 meters in front of us I decided that it might be better to go the other direction. The dog saw us at the same time, and immediately raced towards us.

Fortunately it was friendly, and it joined us for the next hour or so as we walked to the southern end of the beach. I was a bit worried at the far end when it saw some sheep, barked loudly and looked like it might be about to chase them.

There were vast flocks of small birds in the sandhills and corn fields behind the beach. We tried to get close enough to identify them, but as soon as we walked in their direction they took to the air in their thousands, and flew further away.

In the afternoon we set off on the 4.5km Anaura Bay Walkway. This climbs up through regenerating forest to some farm paddocks, with a panoramic views of Anaura Bay and Motuoroi Island. It then winds down through a pine plantation to the Waipare Stream, and follows the stream bed down through a pretty gorge surrounded by dense native bush, including lots of huge pururi trees. The track was a bit challenging in places, but led through lots of different environments in a two hour walk.

By morning it was raining again. We stopped at Tokomaru Bay to empty our waste tanks, then drove off the highway to see the old port. The wharf had a notice saying it was closed due to structural decay, so we sat in the dry vehicle and looked instead of walking out. I had forgotten what a big port this must have been in the first half of the 20th century, before the road to Gisborne was usable by trucks.

There were lots of abandoned warehouses and factories, including an old freezing works. The old harbour board building was once particularly impressive. There was sign on the door next to a slot suggesting that if tourists wanted to photograph it they should slip a donation through a slot, “for upkeep”. There is no evidence that I could see of any maintenance being done since 1953 when the port was last in operation.

The next town is Te Puia Springs. We smelled sulphur as we arrived, and thought it would be nice to have a soak in the hot pools. Sadly there was sign on the door of the hotel stating “Pools are available for in-house guests only”. A nearby window had another sign that just said “Pools Closed”.

We also made a quick detour to Ruatoria, further up the road. Most of the shops seemed to be closed, with the busiest looking business being a caravan selling fast food.

By the time we arrived at Te Araroa, the weather was starting to clear, and there was even a few patchs of blue sky. We parked on the beachfront and made use of the first internet we had received for a while. Before we left, we crossed the road to check out what is reputed to be New Zealand’s biggest pohutukawa tree.

Leaving the highway, we followed the narrow coastal road out to the East Cape lighthouse. There are sections where the road has to get past steep bluffs, and it is obvious the council has an on-going battle to keep it open for traffic.

It was warm and sunny when we set off up the 800 steps to the lighthouse. We were glad that most of the way was in the bush, providing us with shade. We admired the view at the top, especially the distant Mahia Peninsula on the southern horizon.

A few kilometers back from the lighthouse is the East Cape Camping Ground – a couple of sheds and a long-drop toilet on a large coastal paddock. It is beside a river, and when we followed a track down through the pohutukawa trees we discovered a perfect swimming hole.

Later that evening Felicity was talking to Len the owner and mentioned she had seen some mushrooms. He assured us they were edible so we walked down and collected enough for two meals. They were as delicious as mushrooms can be.