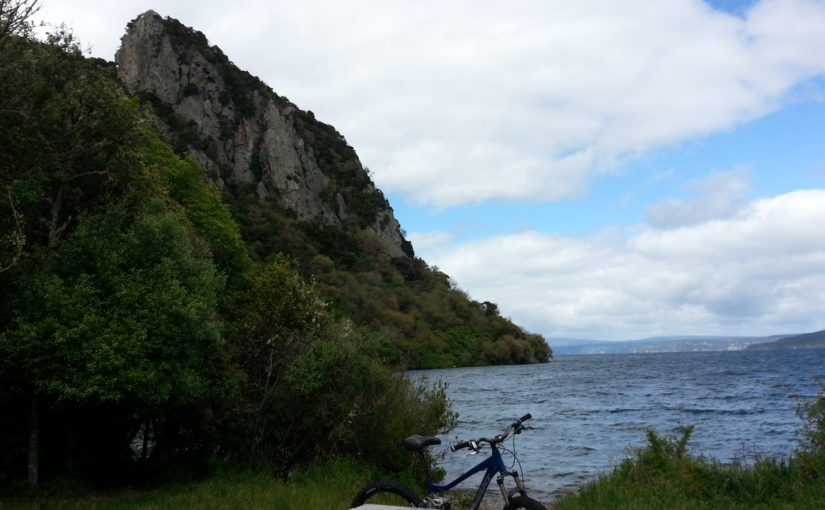 Stage two of the Great Lake Trail in Taupo (otherwise known as K2K) runs west along the lake shore from Kinloch to Kawakawa Bay, then climbs up a valley to the road far above. It is 19km each way, so I’ve ridden 38 km today going there and back.


It is mostly pretty easy riding, apart from the issue of oncoming traffic. Fortunately, and usefully, most people tell you how many are behind them in their group, so I have been saying “just me” repeatedly all day.

I stopped for a breather at the edge of the lake and took the first photo, which shows the Headland Track on the left (where I rode last month), and the route to Kawakawa Bay on the right where I am headed.

There wasn’t much to see down at the bay – just a toilet and a big shelter that would be great to eat lunch in on a rainy day. I just had a quick snack and carried on.

From there it was 10 km of pretty much all uphill, so by the time I got to the top I was ready for lunch. The bottom section is very scenic, but eventually the track passes pine forest and farm land as it nears civilisation.

All the last week I’ve been hearing a bird call that sounds like a rising shriek, but haven’t been able to identify the bird. Today I heard one incredibly loudly, right beside the track, and saw it was a long-tailed cuckoo.

It seemed like no time before I was back down at the shore in Kawakawa bay. A 10 km track that takes 90 minutes to ride up can sometimes be ridden the other way in forty minutes or so. I stopped for a rest and another snack at the edge of the water.

I talked to a guy carrying climbing equipment, and he told me he and his friends were climbing up and down the rocky cliff that you see behind the photo at the top. Apparently there are fixed routes with places to keep yourself clipped on at all times, so it is actually quite safe.

The last photo is taken off a bridge crossing a narrow gorge that was unbelievably deep. As I expected, the camera wasn’t able to show how far down the water was.

There was just one long hill up onto the headland before the final descent into Kinloch. I invested in a ice-cream to celebrate my arrival.

Now I am parked up at the marina, which costs $10 a night but is the only spot in the area. Tomorrow a shuttle is taking me to stage three of the trail – Waihaha/Waihora.

One thought on “Kinloch to Whangamata Rd via Kawakawa Bay”