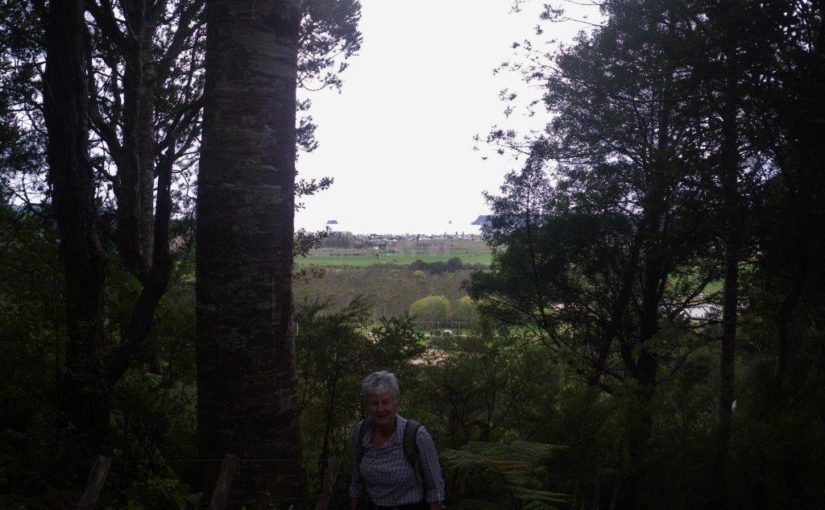 This weekend we’ve been down in Whitianga, where Felicity was running a GP Research conference. We drove down on Thursday afternoon, not quite beating the traffic out of Auckland. Darkness fell as I drove over the Coromandel Ranges on the Kopu – Hikuai Rd.


Buffalo Beach seemed like a good place to spend the night, so I reversed into a coastal parking spot and enjoyed our new wifi internet while Felicity cooked dinner.

In the morning we opened the blinds to see the view in the photo. Felicity took it to send to Judith in Wellington, and since it is the only one she took all weekend we’re sharing it with you. The blobs in the sky aren’t para-sailers or birds – they are dirt on the window of the camper van!

Felicity had to visit a couple of the local doctors, and the conference centre, and the caterer, so that kept us busy most of Saturday. We did find time about mid-afternoon to walk up a track in the Whitianga Bike Park to see some kauri trees. I ended up taking the photo of Felicity in almost exactly the same direction as the shot she took at breakfast time (look for the two small islands on the horizon).

The conference was held at Aotearoa Lodge, so we decided it would be easiest to park the motorhome in their car park for the next two nights. We were given a voucher for free wifi so I spent the evening watching videos while Felicity attended the first session.

My mountain bike was on the back of the camper, but by the morning there had been quite a bit of rain, and it was obvious there was more to come so I decided to save the bike park for another trip. I had seen that the trails had quite a few slippery roots and muddy spots, and I figured it wouldn’t be much fun in wet conditions.

I was determined to have a ride though, so I headed out to the coast and rode north along the coastal path towards Mercury Bay, then back south in the direction of town. I detoured to the end of a sandspit though an area of grass and planted shrubs, and just as I got about as far from shelter as you can get, the rain started bucketing down. Since I was already wet, I continued on to the ferry landing in Whitianga, but when the path ended and I had to ride on the street I decided to pack it in.

All the conference attendees and their families were provided with a packed lunch, with the intention that we would all go for a hike somewhere, but the weather was so horrible that the only sensible idea seemed to be to go for a swim in the geo-thermal hot pools at The Lost Spring. The water comes from a deep bore – there were old stories of natural hot water in the area, but the pools have only been open since 2008. A friend of ours told us about helping build them, and I’ve been wanting to go there ever since. I was very impressed by the imaginative landscaping, and lush tropical planting. You would never guess that the whole area was a flat, open camping ground as recently as 1985.

On the Saturday night we were divided randomly into teams for a series of quizzes while we ate dinner. My team, the only one without any university professors, won convincingly.

This morning the weather was still bad, so I sat in our comfortable warm camper doing some work until Felicity finished at midday. As we were passing through Tairua on the way home, we stopped to invest $20 in some whitebait, which we have just eaten for dinner. A very fine end to a wet weekend away!