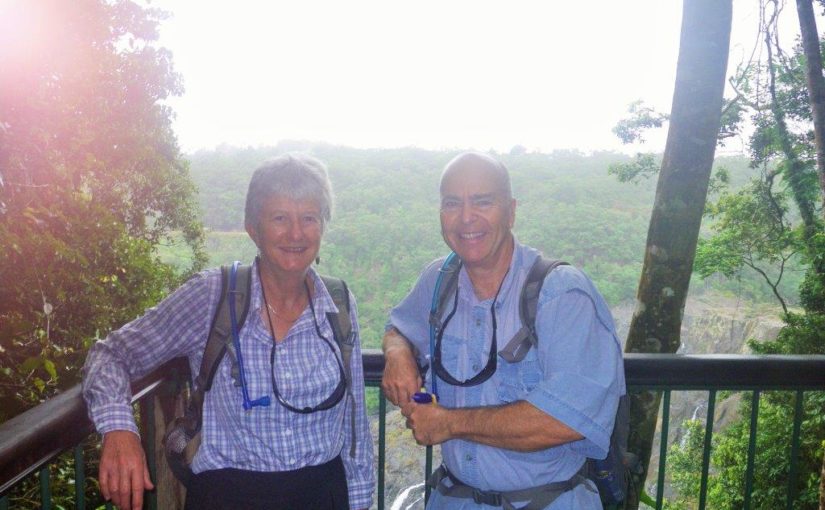 The skyrail trip from Cairns to Kuranda is one of the best attractions we have run across. The ride up in a gondola took almost an hour and a half, including a couple of stops along the way.


After all our walks through the rain-forest, it was fantastic to be looking down at the canopy from above. We could see that some of the forest giants had dozens of other species growing on and climbing up them. We had some great views of the Barron river flowing over a waterfall and through the gorge below.

Kuranda itself was full of tourist shops. The town was pretty much founded by hippies who set up a market back in the 1970s. A few of the stall holders today looked as though they might have been there ever since. We soon got sick of souvineer shops and ice-cream parlours, and set off on a long walk through parks around the perimeter of the town.

We took a not very pedestrian-friendly detour down the Barron Falls Road, which was supposed to be 1.5km to the lookout. After a while Felicity became concerned that we would run out of time and flagged down a couple of tourists in a car, and they drove us the final few hundred metres.

After admiring the falls we found a seat with a roof over us to shelter from the drizzling rain and eat lunch. When we completed the walking trails we checked out the remaining market stalls, but nobody succeeded in selling us anything. The “historic crashed plane” did not actually crash in the centre of town, but was actually a movie prop which was donated to the market by a scrap metal merchant. It arrived on four trucks instead of dropping out of the sky.

At 3.30 we boarded a train on the Kuranda Scenic Railway for the trip back down the mountain to Cairns. This line is considered one of Australia’s greatest engineering feats. It took over an hour to descend 328 meters through 15 tunnels and countless cuttings.

At the Freshwater station near the bottom of the hill we disembarked and caught a bus back to our car at the skyrail terminal.

We have just returned from a walk into the downtown area of Cairns where we enjoyed a delicious Vietnamese dinner.