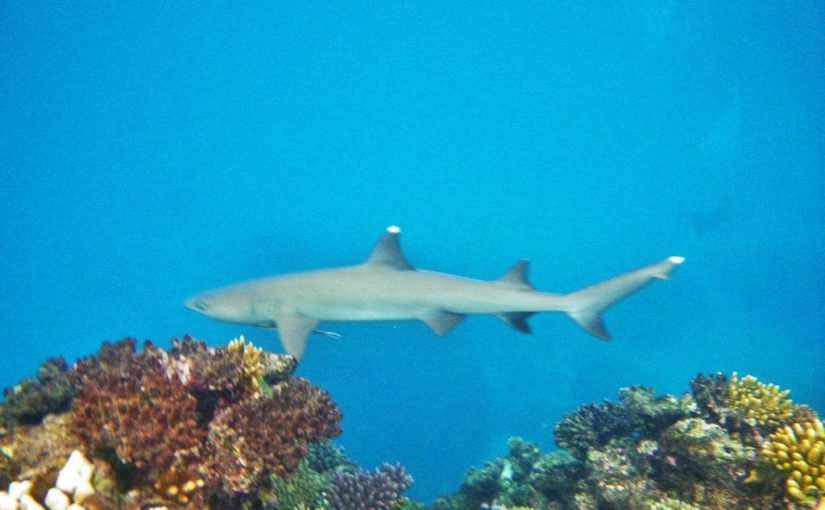 It was our last day in North Queensland today, so we decided to have one last trip out to the Great Barrier Reef. Yesterday’s rain had stopped, but it remained overcast right up until the boat left to return to Cairns. Flynn reef is about 60 km off shore, so the land was pretty much invisible by the time we saw a line of breaking waves indicating that we had arrived.


We had booked on a big catamaran called Silverswift, which takes about an hour and 20 min to deliver 85 divers and snorkelers to three different dive sites. These ended up being only a few hundred metres apart, but they were all quite different so we weren’t unhappy. The tour provided us with full-cover Lycra suits designed mostly to protect from stingers, so we decided to pay a bit extra and hire some neoprene wetsuits to keep warm. Most people didn’t use them, but it meant we could spend an extra 20 minutes in the water without getting cold.

When we first put our heads under the water at the Coral Gardens, the stunning scenery took our breath away. One of the divemasters reckons the visibility was between 20 and 30 metres! Within a few minutes I was swimming alongside a hawksbill turtle. There is very little evidence of coral bleaching on this particular reef, as far as I could see. We watched a couple of reef sharks swim by, but they are pretty nervous of big animals like us and don’t hang around.

We stopped for lunch at Gordon’s Mooring, ate quickly while the scuba divers were in the water, then put our wet gear back on and jumped in the ocean. This time the water wasn’t quite as clear, but there were still thousands of fish to watch. We managed to swim close to a reef shark before it noticed us and took off.

Felicity had just taken the unidentified fish we’ve called ‘clam eater’, when I saw it swim down and nip a bite off the edge of one of the giant clams. This wasn’t one of the real monsters (which can be over 500 years old), but it was still almost half a metre in total length. Quick as a flash it closed its shell almost completely. I remembered reading stories of Pacific Islanders getting a foot caught in one of these clams and having to hack their leg off with a diving knife before they run out of air.

The final stop was at Tracy’s Bommie. This is a huge lump of coral rising almost to the surface in about 10 metres of water. The two of us swam quickly to be ahead of a guided snorkel tour for the masses, and found a green turtle to swim with. It let me get so close that I could have touched it, but I resisted in case it got frightened.

Soon after that we encountered another white-tipped reef shark, and I chased it for a while, again getting within about a metre. On the way back to the boat we ran into a huge humphead parrotfish, almost a metre long and probably well over 30kg. It continued smashing its head into the coral to feed, even when Felicity and I were close by on either side.

Although a big boat with lots of people is pretty crowded when everyone is getting organised at the same time, it was great to have a hot fresh-water shower available on the back deck to rinse off most of the salt before changing into our dry clothes. We were almost home when the skipper suddenly stopped and circled around so that we could watch a pod of dolphins swimming past.

It has been a great final day for our Australian adventure.