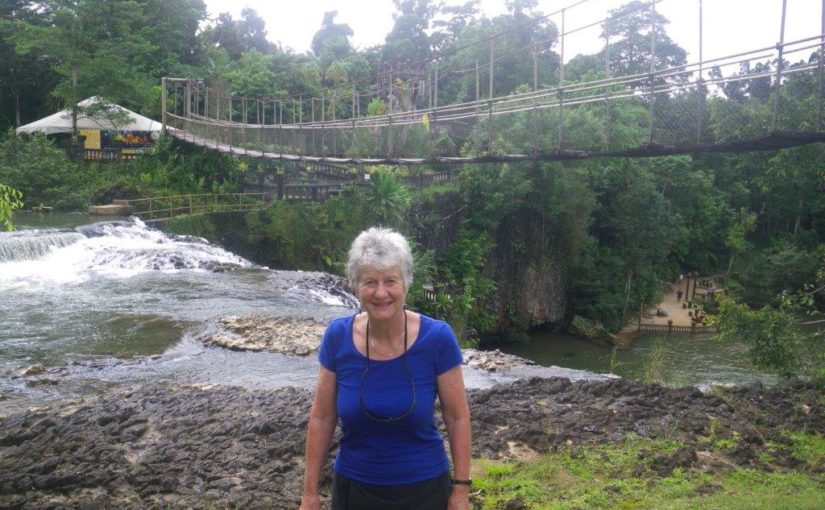 From the deck of our backpacker’s hostel we could see the ocean through the trees, so the first thing we did this morning was to drive down to Bingil Bay and walk up and down the beach. There were signs warning about crocodiles, but I overheard a local saying that all the north Queensland beaches now have these signs so they are not particularly meaningful.


Our main mission for the day was to visit Paronella Park at Mena Creek, where there is a fantastic derelict castle built by a Spanish immigrant back in the 1930s. Jose Paronella made a small fortune creating and selling sugar plantations, then bought a 13 acre property beside the Mena Creek Falls to build his dream castle.

For over a decade this attraction was the centre of culture for the whole area, with a movie theatre, a ballroom, a fancy restaurant and extensive gardens. Jose even installed the first hydro-electric power plant in the area, long before electricity was available to other residents of the district. In 1946 a huge flood destroyed much of his work, and although the park was re-opened within six months it never regained its former glory.

In the 1970s, the park was sold out of the Paronella family, and a series of devastating cyclones destroyed most of the original buildings. Almost every structure on the site was built in concrete, by hand, using old steel rails that had previously been tracks for the sugar cane trains. Unfortunately the local sand from the river was not really suitable for making concrete, so now most of the structures are corroded and dangerous.

After several decades of the jungle gradually reclaiming the gardens, the property was purchased by an Australian couple who cleaned things up and reopened the park to the public. Now it is considered one of Queensland’s top tourist attractions.

I was a bit doubtful about whether this kind of place would be worth visiting, but it turned out to be fascinating. We were given a 45 minute guided tour, then left to explore on our own. The creeks in the park have turtles and huge eels living in them, and down at the river at the base of the falls there are dozens of fish, attracted by the fact that tourists are given little packets of pellets to feed them with. The fish and turtles were so keen to eat the food that they were coming right out of the water on top of each other.

One of the most impressive features to me was the Kauri Avenue, which is two rows of magnificent trees planted by Jose to lead the eye to the falls in the background (which unfortunately aren’t visible in my photo). Apparently the Australian army now uses the kauri pattern for it’s camouflage uniforms. The trees look pretty healthy, so hopefully kauri die-back is not affecting the Australian variety.

After lunch we drove out to the coast to check out Kurrimine Beach. We stopped off at the Murdering Point Winery to sample some exotic fruit wine, and purchased 2 bottles, a white made from passionfruit and a red from the native Australian Davidson Plum, that should go with the kangaroo we are having for dinner tomorrow.

Just before we reached the beach we spotted a track leading into a small bush reserve with one of the few remaining untouched areas of coastal forest. Millions of mosquitoes made it a bit unpleasant, but we did get to see a wallaby hopping off into the bush in front of us. It stopped quite still less than 10 metres away, but it was so well disguised in the undergrowth that it was invisible in the photo Felicity tried to take.

The tide was way out by the time we took off our boots and walked out onto the beach. There were hundreds off starfish on the damp sand, so many that it was difficult to avoid stepping on them.

Now we are a bit further down the coast at Mission Beach, from where we intend to do a couple more snorkelling trips. The backpackers has a swimming pool where we enjoyed cooling off in a crocodile-free environment.