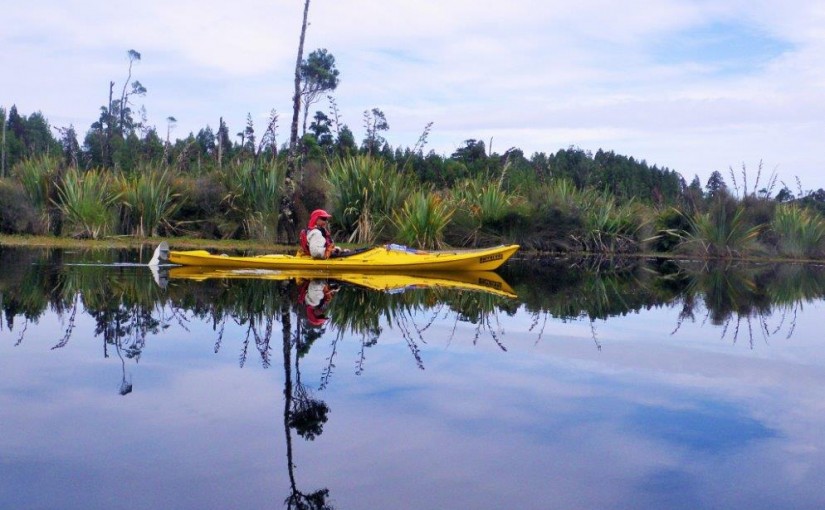 Lake Mahinapua is just back from the coast about 10km south of Hokitika. Before there were any roads in this area, there used to be a couple of paddle steamers travelling up the Mahinapua Creek and across the lake transporting gold miners to Ross, the next town south.


The original steamers are long gone, but many decades ago someone used the parts to make a new boat which was used in Hokitika harbour. Eventually it too sunk and spent years in the mud at the bottom of the creek. Many of the parts were removed by salvagers, but eventually DOC decided to gather all the sections together and make a display which is now at the edge of the carpark.

We were a bit late getting up this morning, but we still managed to get launched by 9.30am. The lake was a little bit windy, and we were a bit disappointed to see the snow covered mountains were again covered by cloud. After about a kilometre of following the shoreline, we spotted the entrance to Mahinapua Creek, which drains the lake.

Almost immediately we were paddling in paradise. The water was often so still it was like being on a mirror, and the view looking down was almost as clear as the view looking up. We passed patches of water lilies and other flowering aquatic plants. The creek has flax growing along the edges instead of the mangroves we would see up north, unless the native bush came right to the water.

When we rounded one corner we saw a kotuku (white heron) flu across in front of us and sit on a tree watching us approach. When it took off again it flew in a graceful arc in front of the trees. Later we saw several more of these spectacular birds, which I had hoped to see at the Okarito sanctuary when we get further south.

After a while we emerged from the forest, and paddled alongside farmland for a while. This part of the creek had quite a lot of weed growing in it, which made progress a little difficult. When we realised from the sound of traffic that the highway was close by, we decided to turn around.

It took a bit over an hour of steady paddling to get back to the boat ramp. Two young guys who had left in canoes to go fishing at the same time as us showed us that they had only been able to keep one small perch of the four they had caught. We told them that we had seen heaps of fish jumping up the creek, but they told us they aren’t allowed to fish there.

Now we are in Hokitika, sitting in the public library using their free internet after doing a bit of shopping. There are a lot more little lakes to the south of us, but it seems some more rain is forecast, so we will see what turns up.