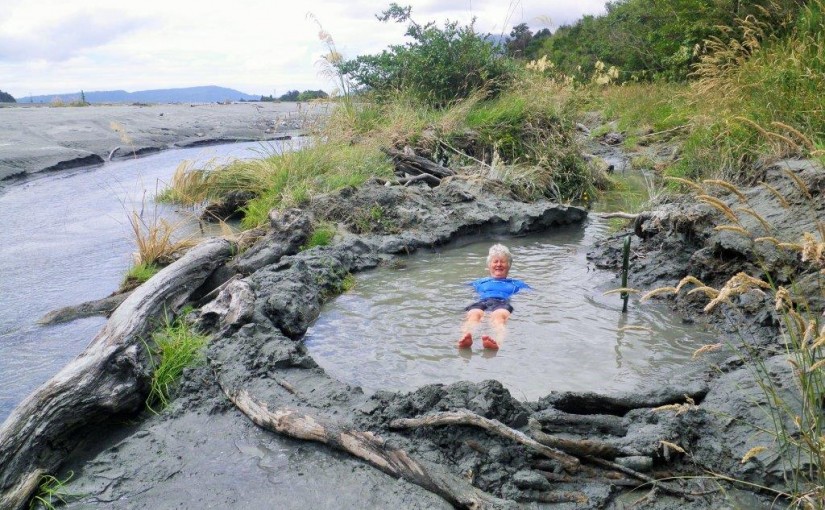 Heavy rain forecast for Friday made us decide to hang around Hokitika so that we could get some work done using the wifi in their public library. The Motor Caravan Association has a campsite just across the bridge from town, so we found ourselves a spot there.


Before dinner we went for a stroll out to the beach at the south side of the river mouth. The paddock we walked across used to be an airfield where the first commercial airline in NZ operated from. Now it is just a flat piece of grass.

The path led down off the stopbank and out onto the river flats, passing over shingle and thankfully hard mud. We saw another kotuku flying overhead. Just before we reached the beach our way was blocked by a waterway which I realised was the end of the Mahinapua creek that we had been kayaking earlier in the day.

While we were eating, the rain started, and it kept up pretty steadily all night. It was beginning to ease off by morning, but it was still better to be sitting in a dry library than being outside.

At lunchtime, we drove to where the Hokitika wharves used to be, and were surprised to see that what had been a medium sized river winding between shingle banks was now a raging torrent. Huge logs were washing down out of the mountains and disappearing out to sea. The water level was nearly at the top of the stopbank where we had been walking the day before.

The rain had stopped by now, so we walked along the north side of the river learning a bit of history. At one time Hokitika was the sixth largest town in NZ, and we saw photographs with dozens of sailing ships tied up along the quay. Unfortunately the bar at the mouth of the river is very treacherous, and many ships were wrecked trying to enter. At one time there was an attempt to build a breakwater like at Westport, but there is no trace of it today.

Our guide showed a free camping area near the Poerua river, but we weren’t 100% sure of how to find it. I ended up driving for several kilometres along a narrow metal road on the top of a stopbank, until we came to a ford that looked muddy and soft – not a place for a 2WD vehicle I decided. This meant I had to reverse for about a kilometre until we came to a spot where there was enough room to turn around. Luckily, the next wide spot was perfect for camping, so we parked up and enjoyed a quick dip in the river before dinner.

In the morning we drove back to Hari Hari then headed out to the coast for a hike. There is a loop track that goes out to the mouth of the Poerua, along the beach and around a headland, then back alongside the Wanganui River. A sign at the beginning warned us that this was only possible within four hours either side of low tide, and since we were due to arrive at the beach about five hours after low it meant that we had to change our plans.

We had parked at the site of an abandoned saw milling town. The coastal plain in this district was once covered in kahikatea trees, and an Auckland company set up the mill to make timber for butter boxes. The track out to Poerua began along the line of an old bush tramway, where a steam locomotive once dragged the huge logs to the mill.

At the point where the track used to cross the swamp on a now ruined trestle bridge, we turned off and followed a kilometre or so of boardwalk. At the edge of the swamp we joined with the old coastal pack track, which is a wide, benched trail heading up over a small hill. I was very surprised by the good condition of this track, which almost looked manicured. When we arrived at the beach we found several baches (or more accurately cribs since we are in the South Island). The owners can presumably drive around the coast at low tide, but otherwise this track is their only access.

When we arrived back at the track junction near the carpark, we headed out along the northern part of the loop, along the Wanganui River. This has many serious whitebait stands, some with huge metal walkways that can be lowered down to get the fishermen out into the current. We met a local couple who told us that a lease in this area can cost $120,000.00, plus an annual fee! They later told us that their very nice house in town cost the same amount.

Out at the beach, we sat on a log and enjoyed a snack, then climbed up Mt Oneone (aka Doughboy) at the head of the river. We ignored a DOC sign saying “Track Closed – Erosion”, so as we were standing on the narrow top taking photos I wondered if perhaps it had been undermined and we were suspended out over the sea.

On the way back though Hari Hari we stopped at Brian and Sheila’s house to buy some of their whitebait for dinner. They reckon the whitebait in this area is a different species to what we ate up north, and that theirs is far superior. Felicity is just starting to make dinner as I write this, so I will find out shortly. We stopped at a local store to buy lemons, only to be told that someone had just been in and bought the entire supply, so sadly we will have to make do without. I am reminding myself that there are people in the world with worse problems.

Back up the highway and across the Wanganui is the Amethyst Creek Power station. There was an attempt at building a small hydro scheme on this creek back in the 1950s, but it kept getting blocked or otherwise breaking down, so it was closed in the 1990s. A few years ago a company drilled a tunnel up through the mountains to the headwaters of Amethyst creek, and four years ago a new hydro station was opened. There is no dam or water storage involved, but the enormous height of the intake means that even a small amount of water is sufficient to generate a steady power supply.

Our mission was to find the Amethyst Hot Springs, which involved walking a few kilometres up a farm road, then finding a narrow path down to the river. Sheila had warned us to wear our rash suit tops, because there are a trillion hungry sandflies waiting for unprepared bathers. People dig holes in the mud/sand at the edge of the river which get destroyed every time the river floods. We had to do a bit of repair work with our spades, but we found enough hot water to get thoroughly cooked.

PS: the whitebait were indeed superior.