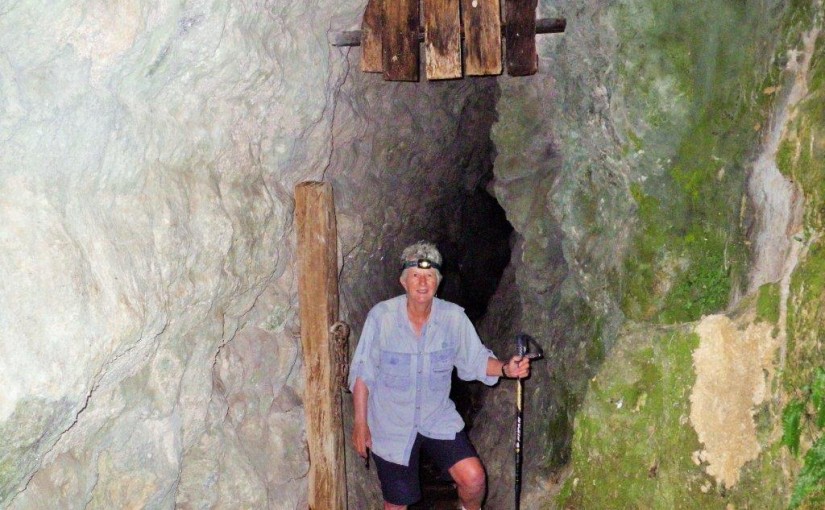 Bullock Creek didn’t flood and wash us away during the night, so we woke to another fine day in paradise. After breakfast we drove back down to the highway, then even further north to the carpark at the mouth of Fox River, where the Inland Pack Track begins.


The first 40 minutes was mostly pretty easy because the Pack Track is benched and level, apart from a few sections that have been washed away requiring detours. For a while we walked across a wide shingle bank at the side of the river, giving us an opportunity to admire the high limestone bluffs on either side of the valley.

When the Pack Track crossed the river we turned off and continued up the right bank, which became increasingly slow as it crossed slippery rocks. After a while we began to climb steadily up the cliff, a task made more exciting by large amounts of stinging nettle growing beside the track.

We came to a huge cave entrance in the side of the cliff, but a notice warned us that the lower cave was dangerous, and that we should only explore the upper cave, which is entered via a small hole at the top of a bank. Up until the 1950s a local tourist operator used to charge people to visit this cave, and we could see the remains of the wooden door that formally locked the entrance.

According to the sign, the cave is 7.5 chains (or 150 metres) long, but it was quite slow going and it seemed a lot longer. It is a rather damp cave, and by the final 50 metres we were wading through water that reached almost to our knees at times. Sadly, many of the stalactites had been broken off for souvineers, and some early visitors had left their names on the wall.

It was still a lot of fun, and it took us almost an hour to get to the end and back out to daylight. We were lucky to have it all to ourselves, because we passed a dozen or so other people on their way just as we left.

It was after 1.00 when we arrived back at the van, so we were ready for lunch and a bit of relaxation, so it was mid-afternoon before we hit the road again, heading south. Just before Punakaiki is the Truman Track down to the coast, so we parked on the side of the road and walked down.

This track was made by friends of Joy’s brothers many decades ago, without any regard for the fact that it crosses private land. It subsequently became so popular that DOC had to take over maintenance and deal with the complcated access issues.

The coastal forest is predominantly nikau and rata. We passed one of the biggest northern rata vines that I have ever seen, slowly strangling a fairly large miro tree. It was nice and cool in the bush, but when we arrived at the sea shore we realised what a hot day it has been. There is a blowhole near the end of the track, but with the tide low it was not particularly spectacular.

There are signs warning people about how dangerous the beach is for swimming, but we couldn’t resist and found a relatively calm spot behind a big rock. We didn’t go in very deep though, because the waves were enough to knock a person over even in shallow water.

All along the cliffs are small waterfalls where creeks arrive at the edge and spill over. One of the biggest was a great place to wash off the salt, but the force of the water on my head was almost painful. The beach is made of tiny pebbles instead of sand, and enough of them are black to make our bare feet burn when we crossed the dry sections.

Now we are parked just up the coast from Greymouth, at the northern end of Cobden beach. The sea is less than 10 metres from the rear of the van, so we will be listening to crashing surf all night. From this part of the coast we can see snow capped mountains in the distance, which seems odd when you are on a hot sunny beach.