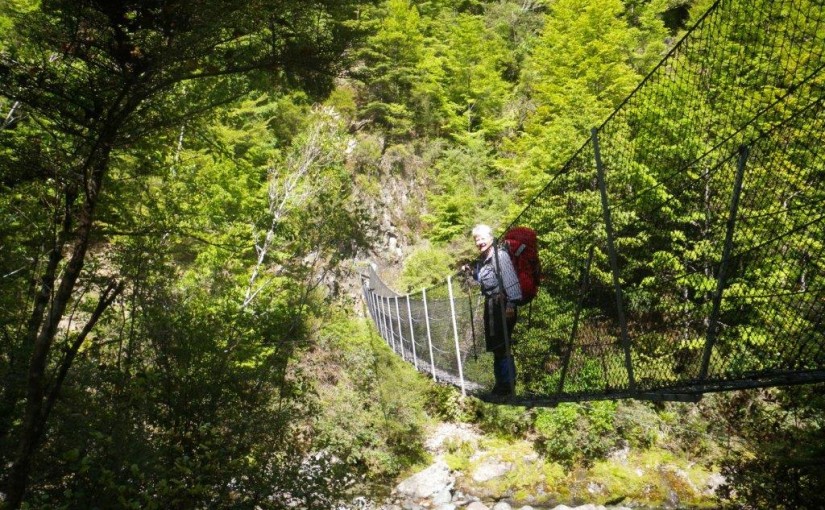 The alpine section of our trip is over, and we spent the morning descending steadily to the Wairoa River.


We crossed the river and checked out the Mid Wairoa Hut, but it was infested with bumble bees and wasps, and not an attractive place to hang out. We ate a quick snack and set off down the river.

The information about how far we had to go to the road end was rather vague. A note on the map in the hut said two and a half hours, a sign outside said three hours, and a hundred metres down the track at the end of the bridge a third sign said five hours.

I had fantasies of a flat path (perhaps even a 4WD road) alongside the river, but it turned out to be a narrow route that climbed up and down over steep bluffs and side streams. It was very tough going, and the only redeeming factor was that the river was very beautiful, with clear water spilling over sculptured rocks.

At a deep pool where the trail descended to water level we stopped for a brief swim and lunch in the sun.

After another couple of hours we found ourselves on an old road, which was a great relief until we realised it was only about half a kilometre long and we were climbing yet another steep bank. In total we spent more than six hours walking after the hut, by far our longest day.

Eventually we reached a strangely deserted mountain bike park. Someone has spent hundreds of thousands of dollars building an operation that must have failed, because it was all locked up, with no cyclists to be seen.

From there we had a six kilometre walk to the gate, but along a metal road which was fast but rather hard on our tired feet. We were all very relieved when we finally rounded a corner and saw Julie’s car!

John and Jocelyn dropped us back at our campervan. As soon as we opened the door we could see that our stowaway rat had found its way into the overhead locker where our food is stored. There was rat poo and scraps of wrapping all over the floor, so we were grateful that Bob lent us a vacuum cleaner to remove it.

Just when we thought things were under control, Felicity opened a bin to find a nest with three baby rats curled up on a shopping bag. They got thrown unceremoniously onto the road outside the door, and our bags and a couple of spare towels got added to our collection of rubbish.

The final shock came when Felicity discovered that the mother rat had chewed up the insoles of her favourite shoes.

We were both a bit traumatised by this time, as well as being exhausted. Bob generously offered to cook us dinner, so after a hot shower and a glass of wine we finally felt we could relax. When we returned to the van, we discovered that the rat (no doubt rather angry with us) had destroyed a new pack of coffee which we had assume was safe to leave out of a container.

Helen had flown to Auckland for a few days, so we accepted Bob’s offer to sleep in her bed so as to avoid having to listen to the sounds of destruction all night.

This morning we purchased a rat trap, and we are now at John and Jocelyn’s house in Takaka waiting for it to get caught. If it is still on the loose by bedtime we might spend another night away from our campervan.