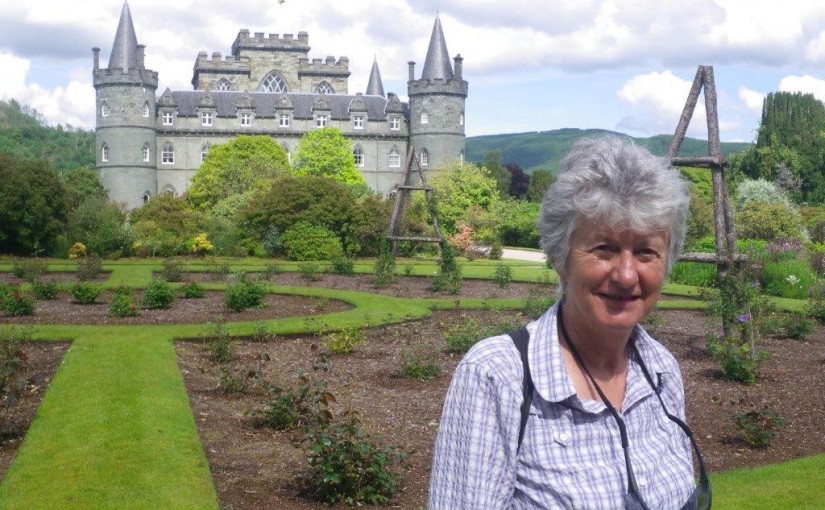 We have picked up a hire car in Inverness and are on our way back south to Oxford. We are making a detour through Argyll where Felicity’s Campbell ancestors originated.

Yet again we drove through the Great Glen along the A82 highway to Fort William. This road is starting to feel very familiar after the number of times we have travelled along it in recent weeks.

At Fort William we turned south and headed for the Cowal Peninsular. This part of Scotland has a lot more trees than the highlands, so it seems very attractive compared to the bare hills further north.

Our main destination was Inveraray Castle. As we arrived, we noticed a high hill behind the estate, which for centuries had a guard on top ready to light a signal fire if any invaders were spotted trying to mount an attack. The Campbells were one of the largest and most powerful of the Scottish clans.

The original castle built by Colin Campbell, Felicity’s 10x Great Grandfather, is long gone. The site is marked by a few white stones on the back lawn of the current castle which is still the home of the clan chieftain, the 13th Duke of Argyll.

His castle was built only a few hundred years ago. It was never intended to be defended, so the style is quite different from older castles. It featured recently in the TV programme Downton Abbey, when the family went to visit their Scottish relatives.

Inside the main room has the highest ceiling of any building in Scotland, with the Campbell coat of arms displayed in the centre. The main room contains a huge collection of weapons – almost enough to start a small war. After Culloden, most Scots were forbidden to own guns, but since the Campbells supported the English they were no doubt exempt.

We were able to explore about a quarter of the rooms. There are all sorts of family heirlooms and paintings of famous Campbells on the walls. The huge kitchen downstairs looks like it could produce meals for hundreds of people – a spit in front of the fire can take w whole pig. We were mystified by one of the dry-goods drawers marked “shaved hart”, until we learned that deer horn was used to make jelly.

The gardens are well-tended and we walked around and through a woodland. Some of Britain’s tallest trees grow here, thanks to a temperate micro-climate produced by the gulf stream. The place must need quite a few staff to run it, but hundreds of tourists paying ten pounds each must help with that.

As is usual in these kinds of places, the exit was through the souvenir shop, but instead of rushing through like we normally do, Felicity stopped to purchase a family tree and a couple of books about the history of the clan.

The town of Inveraray is very scenic, with no modern buildings spoiling the historic architecture. We had a drive around the narrow one-way streets before heading further south to Dunoon where we are spending the night.

One thought on “Inveraray”