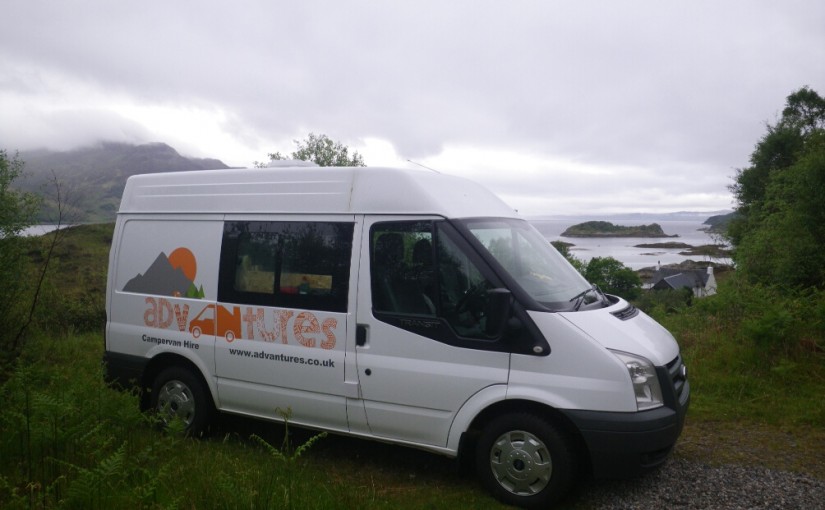 This evening we are parked right on the coast looking out over the Sound of Sleat to The Isle of Skye. Just up the coast to the north is tiny Sandaig Island.


On our way back from Glen Affric this morning, we made a slight detour to see the historic village of Tomich. This is a very attractive little place, with lots of stone buildings and gardens filled with flowers.

We stopped to look at a huge stone fountain, that was errected in honnor of the local lord by his devoted children. The plaque said that his greatest delight was working to improve the lives of the local peasants population, etc. etc. It also mentioned his wife: “the mother of the people”. A bit further on was a statue of his dog, and I immediately wondered what great deeds it had done, but was interested to learn that this is actually where the first Golden Retreiver was bred.

Back in Drumnadrochit, we drove up a country lane to see the Falls of Divach, which were quite pretty. I spotted a squirrel, but it was the bad, red variety from America, not the native grey.

Since we had walked past Castle Urquart a couple of days previously without having the energy to visit, we decided to inspect it today. Once the original Picts had been disposessed of their fortress, a castle was built around 1200AD. It was given by the king to the Grant Clan, who held it for the next few hundred years, although they were regularly attacked by the MacDonalds from the Western Isles. In what became known as the “great raid”, the MacDonalds took absolutely everything, even pots and pans.

Despite these setbacks, the castle was one of the largest and most impregnable of all the Scottish castles, and since the Grants supported the English king it was attacked and beseiged by the Jacobites during the rebellion. Eventually the Grants decided it was too much trouble to defend, and blew up the defences with heaps of gunpowder before marching into the sunset. For years local people plundrerd the ruins for building materials. Over ten tons of lead was found stored in sheds and barns around the district.

While we were walking around, we stopped to watch a demonstration of medieval weaponry by one of the guides. He was very informative about the merits and disadvantages of battle-axes, maces, swords, daggers and bows and arrows. He recruited a young American tourist to model some chainmail head protection, but didn’t have the confidence to actually whack him with anything.

He also demonstrated the use of the huge Scottish claymore sword, which is so heavy that it needs two hands to swing it. The top is razor sharp, but the middle is blunt so that the soldier can hold it with both hands and fend off other weapons. Because the claymore is so long, it can’t be carried by your side, and has to live in a large scabbard with a rope attached so it can be on your back. This means it must be unslung from behind you and removed from the scabbard before use, unless you are Mel Gibson who can reach behind his back and pull it out in one go.

We ate lunch in the carpark, with enough sun shining that we could open the back doors of the van and enjoy the outdoors. No midges attacked us, so we haven’t tested the Avon Skin-So-Soft yet.

Further down the coast of Loch Ness we turned of the A82 and drove north through Glen Morriston. The scenery got increasingly wild, and the mountains got bigger and more rugged after we passed the end of Loch Cluanie.

At Glen Shiel we stopped to look at the site of a 1719 battle between the English redcoats, supported by the Dutch and Jacobite rebels supported by the Spanish. The Scots lost that round. At Shiel Bridge we turned off the main road and drove out to Glenelg on the coast. We were surprised to find a small patch of cell-phone reception, and stopped at the edge of the beach to download emails.

Up another narrow road we visited the two Glenelg Brochs. These are huge, circular stone structures that were built about 2,300 years ago. There are actually two interconnected walls leaning on each other, with hollow spaces in between. It is believed that there would have been a wooden building inside, and that people lived in there, relatively safe from attack. It must have been a fairly wealthy society to have been able to devote so many resources to such a large stone building.

We continued driving south along the coast, until we found the perfect spot to spend the night. It would be a fantastic place to kayak, and I’m looking forward to our trip next week.