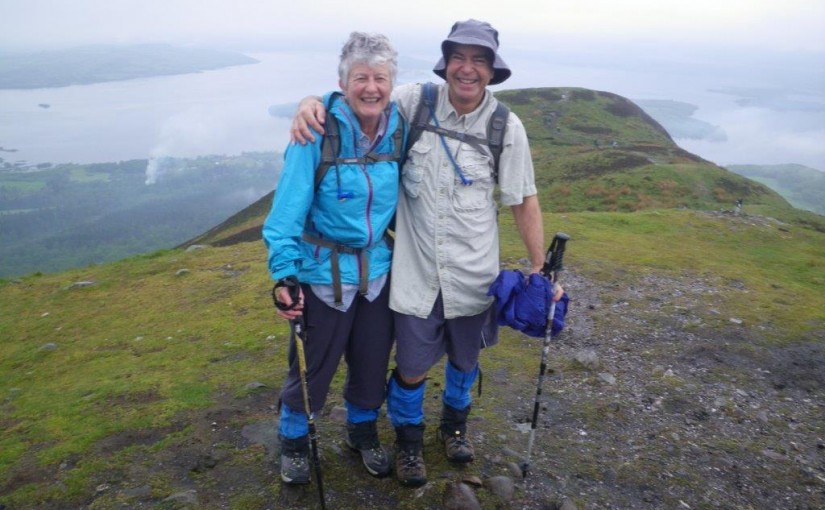 The Way from Drymen climbs up hill through the Garadhban Forest, mostly along forest roads. Some of the trees have been harvested recently, as we could see by the piles of logs beside the track.


At the top of the hill we saw our first view of Loch Lomond, and as we stopped to take a photo we were joined by a large gentleman wearing a kilt. I assumed he was a local, but he told us it was a Cornish kilt, and that he was walking the length of Britain, from Land’s End up to John O’Groats. He has been walking for two months, and expects to take another month to complete his journey.

A bit further on we came to a steep path up Conic Hill. I was quite hot climbing up, but a light drizzel and a bit of wind at the top forced me to put my poncho on after we took the obligatory photographs. We were lucky to get a view at all, because as we started down the other side towards the loch, it started to rain and the summit was lost in the clouds.

At the bottom of the hill is the town of Balmaha, where we bought some bread and sat in the shelter of the visitor’s centre to eat our lunch. Inside the centre was an interesting display of stuffed animals, including badgers, otters, water-rats, stoats and weasels. It was a bit cold to hang about, so we set off again without much of a rest.

The track followed the edge of the loch for a while, past some attractive beach where it would have been nice to stop for a swim if the temperature had been 20 degrees hotter.

There were a few sections up and over headlands, but mostly we followed the shoreline for the next few miles. We saw quite a few kayakers out on the mirror surfaced water, which made us look forward to our own trip in a few weeks time.

The hotel at Rowardennan is at the end of the road, which means we will be heading into the wilderness tomorrow. The building is quite old, and the floors and particularly the stairs slope significantly. We have just shared a hot bath which was nice for our aching feet.