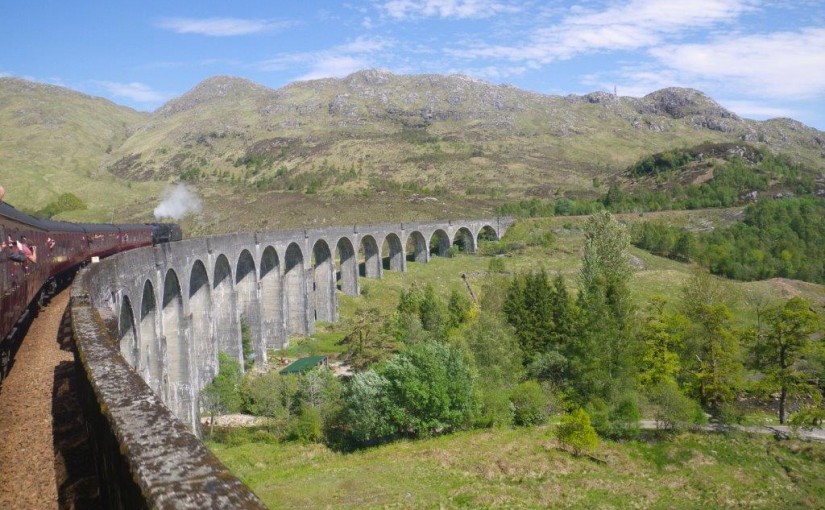 With another 110 km walk starting tomorrow, and Felicity having a bit of a sore knee we decided to have a rest day today. We took the Jacobite Express train up the coast to a small port where the ferry leaves for the Isle of Skye.


This is the steam train that they used in the Harry Potter movies, and the journey includes the famous curved Glenfinnan Viaduct built by “Concrete Bob” McAlpine. This was one of the first structures built of mass concrete instead of stone, and does not include any steel reinforcement. All the way along our journey, but particularly near the viaduct, there were hundreds of photographers taking photos of the train and waving to us. We felt very important.

We travelled the length of Loch Eil, past the end of Loch Sheil, then along Loch Eilt before reaching the sea at Loch Ailort in the Sound of Arisaig. From there we went mostly up the coast, looking out at the Western Isles of Eigg, Rum and Skye.

The track passes the Glenfinnan Monument, which marks the place where Bonnie Prince Charlie began his campaign to restore the Stuarts to the Scottish throne in 1745.

We invested 50p each to visit the Glenfinnian railway museum, which taught us about Concrete Bob, and the building of the highland railway. Many highland stations used to have sleeper cars permanently parked for passengers to stay in, and this station has one that is still in use. As I was about to re-board the train, I noticed someone had left a quidditch broomstick on the platform.

At Mallaig we purchased tickets for a one hour nature cruise on a boat. While we were waiting, we came across a pirate with a parrot that repeated everything we said to it. The cruise itself was very pleasant on such a fine day. It went a few km up the coast to where there is a rock covered with and surrounded by seals which was somewhat interesting. No sign of the porpoises, minke whales, sea otters or golden eagles that they said we might spot.

Back at Fort William we walked out to the site of the actual fort. Unfortunately not much is left of the structure that gives this town its raison d’être – in the 1970s it was largely bulldozed to make way for the A82 highway. This is where our walk starts tomorrow.

One thought on “Mallaig”