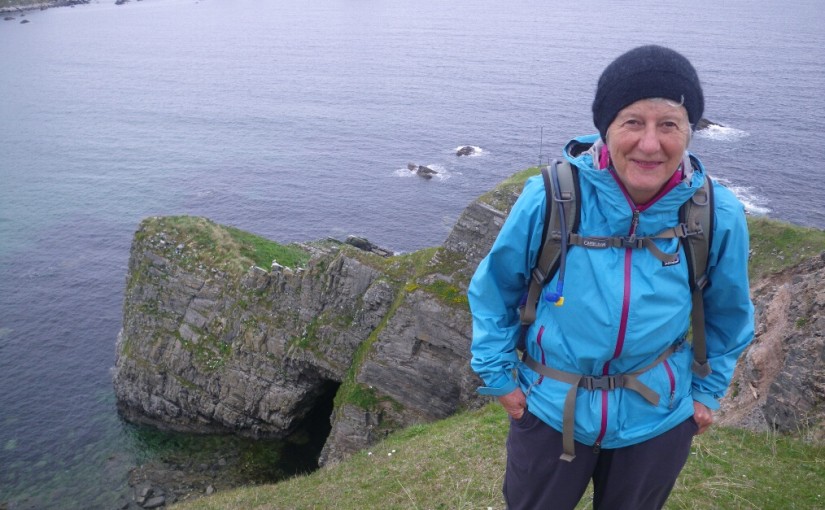 Today we have been exploring the Scottish district of Sutherland, in the far north-west corner of the country. It is so named not because the Scots are geographically challenged, but because this area was once part of a Norse empire.


Felicity’s watch is playing up, so we accidentally started the day about 5.30am because of the early sunrise, and this meant we were on the road soon after 7.00.

We stopped to have a look at the ruins of Ardvrek Castle, which are in a very picturesque setting on the edge of Loch Assynt. There is also a prehistoric burial cairn on the site, although the flat roof stone has now collapsed into the chamber. When I looked across from the castle I noticed four deer not much more than 100 metres away, but they moved when they saw me.

Since we are rapidly running out of time in our campervan, we avoided a number of interesting side roads and potential detours, and headed for Durness, on the north coast.

The first item on our agenda was to find Puffins, which Felicity has wanted to see ever since she was a little girl – no doubt influenced by Penguin Publishers series of books for children. We got distracted by a ruined stone church, which had a tomb inside where one of the local bandits is buried to prevent a witch from carrying out her threat to dance on his grave.

We walked out along a sandy beach, stopping to explore a sea cave at the end. Outside in the wet sand we could see thousands of extruded tubes of sand like spaghetti and burrows almost exactly the same shape and size as the those in the trumpet rock we had seen when climbing Beinn Eighe two days ago.

Up on the edge of the cliff I took a photo of Felicity without realising that the birds we were looking for were sitting on the grassy cliff top behind her. We were looking everywhere until I realised they were right in front of us. Luckily there was a German tourist with a telephoto lens on his camera, and we could confirm that they were indeed puffins.

We stopped back at the van for lunch, then walked in the other direction to see where the town of Borralie used to be. All through the highlands there are towns which were abandoned due to the clearances of the early 19th century. The downside of being a crofter (tenant farmer), is that when the landlord tells you to rack off, you have no choice except to obey. Because there were lots of wealthy people in the southern cities who could afford to eat steak, there was a boom in beef prices, and Scottish landlords wanted all their land to run cattle. The Duke of Sutherland forcibly evicted over 15,000 tenents.

The area around the town of Borralie has been inhabited for at least 2000 years, because the soil is fertile. There are prehistoric burial cairns, a house where Norwegian king Hakon used to live, and other buildings that go back to the 1400s.

The first building that we came to was the old Croispol schoolhouse. The last schoolmaster was hired in 1811 at the age of 16. He survived a scandalous affair, and when the last pupil left in 1850 successfully sued the authorities for wrongful dismissal, and got paid for the next 11 years to do nothing. Even after the school officially closed, he continued to live there until his death in the 1870s after which the building deteriorated into the ruin it is today.

Most of the other buildings are little more than piles of stone and curved grassy banks. The stone sheep pen in the photograph was built after the town was abandoned.
Our walk back passed the craft village of Balnakeil, which is made up of dozens of unusual flat-roofed houses that were presumably once a military base.

Not far up the road is the huge Smoo Cave. We arrived just after 4.00 and added our names to a whiteboard to indicate we wanted to take the tour. When the guide returned with the previous tour he asked what the time was, and when told wrote on the whiteboard “Last Tour 4.15”. So we were very lucky. The entrance to the cave is huge, and free to explore. To go further six of us had to climb down a ladder into an inflatable dingy, and duck very low so it could squeeze under a stone arch. The second chamber had a spectacular waterfall running in from the stream above.

We got out of the boat on the far side of the pool, and walked along a series of wooden planks to the end. One by one we held a torch and looked up a vertical shaft that once must have had a waterfall of its own. The guide told us it would have been blocked by a huge boulder pushed down by a glacier many years ago. He once climbed the shaft and found a horizontal passage that he could just crawl down. He was very excited at the thought he was exploring a new cave, until he found “a fecking cigarette packet”.

Once out of the cave we climbed up the other side of the valley and walked out to the edge of the cliff. The wind was blowing in from the Arctic so it was freezing cold.

We were lucky enough to encounter a mobile fish-monger in his van this morning, so we are about to enjoy more of the local produce – fish, scallops and prawn tails in a Thai coconut curry.