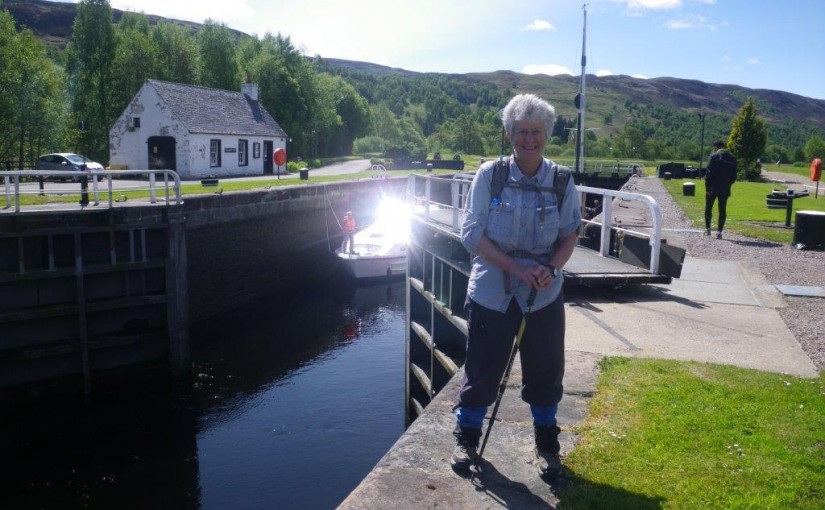 Today’s walk has been very pleasant, first along the shore of Loch Oich, then along the side of the Caledonian Canal.


We were very pleased to see a bit of sun at breakfast, and I optimistically started walking with only a shirt, but low air temperatures and a chilling wind forced me to wear my coat for a few sections. Once we had walked back along 800 metres of highway to re-join the Great Glen Way, the trail through the trees along the canal was very enjoyable.

When we reached the lock at the end of Loch Oich, we left the canal and walked around the back of the Great Glen Water Park to the Leiterfearn nature reserve. The trail led past the site of the old Invergary railway station, where enthusiasts are building a museum. From here we walked along the old rail bed, which has been repaired at great expense to make a flash cycleway. The railway used to run from Spean Bridge to Fort Augustus, but it was abandoned in 1911.

About half way along the loch we saw the ruins of Invergarry Castle across the water. This used to belong to the MacDonalds, but they made the mistake of supporting the Jacobite rebellion and hosting Bonnie Prince Charlie there, so it was burned after their defeat at Culloden. Tied up in front of the ruin was a huge launch which is steadily sinking into the loch.

After a few miles we left the railway and dropped down onto the old military road which runs alongside. At one point the rail/cycleway passes through a tunnel, and our road climbed up over the top of it.

By the time we reached the end of the Loch I had warmed up enough to take my coat off and enjoy the sun. We hung around the Cullochy Lock to watch a boat passing through, which is always entertaining. By now we had met up with a Danish woman and an English couple from our B&B, so we spent the rest of the trip walking with them and swapping traveller’s tales.

The next section of the Way is along the canal tow-path, with the river Oich running parallel beside us behind a row of trees. We stopped at a shady seat to eat lunch, but the cool air eventually drove us all out into the sunshine.

As we came in to Fort Augustus we passed another series of locks, stepping down to Loch Ness, which is around 15 metres above sea level. There is another swivel bridge on the A82 highway, and we stopped to watch the road being closed to allow four boats to enter the locks. Fort Augustus was built in 1729 as the centre of the English military occupation, and is the hub of General Wade’s military roads that we have been walking on.

The town was swarming with tourists all afternoon, and since we could only see a few restaurants we got a bit nervous about finding somewhere for dinner, so we booked a table at a pub. It turned out to be an excellent choice, and we even got to try a dish we had been recommended called “cullen skink”. This turned out to be fish soup, which was very nice but not as exotic as the name suggested.

After dinner we wandered down to the edge of Loch Ness, and then back through the grounds of the old fort. In 1867 it was sold to the Frasers of Lovat who subsequently gave it to Benedictine monks to turn it into an Abbey. This was closed in 1998, and the complex is now a private development called the Highland Club, which runs a hundred luxury apartments and a restaurant. We ignored the “private property” signs and walked back to the road, past dozens of rabbits grazing on the immaculate lawns.

One thought on “Fort Augustus”