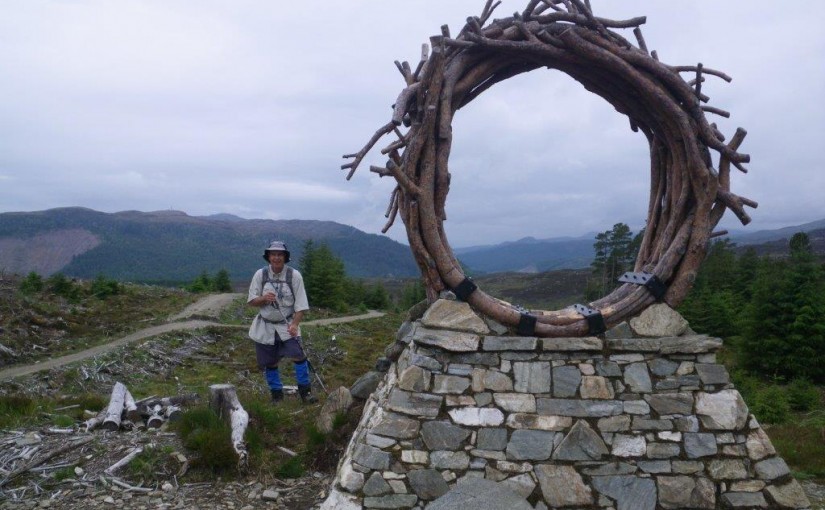 As soon as we set off from Invermoriston this morning on the Great Glen Way we climbed steeply up hill through the trees.


We had just about reached what I thought was the top when it headed downwards again, which was basically a pattern for the day. Mostly the track followed the top edge of the tree-line, sometimes onto moor land with views over the loch.

We passed several works of art – a ring of tree branches bolted on to a stone, an attractive troll bridge with a signboard displaying poems from local school kids, and a couple of rock shelters with seats. One was cleverly built in an “S” shape with two seats, one of which will always be out of the wind.

Soon after midday we caught up with another couple walking the Way, then a Danish woman we have walked with before. The five of us continued on together, chatting about this and that as we walked.

About an hour before we reached Drum (as it is called by many of the locals), we came to a pottery offering refreshments, so we made a short detour to sit and drink a cup of tea. The pottery looked like the sort of hippy place you might find in the Corromandel.

At our B&B we received the nicest welcome of the trip so far, with an invitation to drink some more tea and enjoy home-made fruit cake before going to our rooms. We were recommended three different places for dinner, but we both thought the one that was just through the back fence sounded pretty attractive. The Benleva pub brews the Loch Ness range of real ales, which I had been hoping to try, so that seemed a good reason too.

When we asked the publican which ales they had on tap, he went off and came back with three small glasses so we could try them all. We asked him how long the pub had been there, and he told us that it was only since the 1990s – before that it was a guest house. The building itself though was over 300 years old, and up to the 1950s had been the church manse.

“Did you notice the big tree that you walked under on your way in?” he asked. “That used to be the town hanging tree. Dozens of men were executed there after the Jacobite rebellion.”