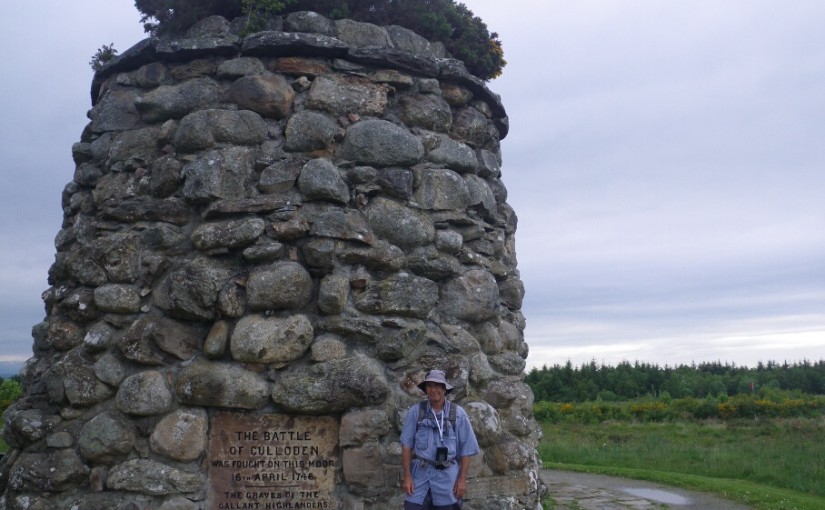 This morning we visited Culloden Moor, site of the last battle on British soil, where the Jacobite reballion was put down by the English.

The information centre taught us a lot more about the whole Jacobite rebellion, particularly with regard to the involvement of other European powers. There had already been a number of battles in Europe between the French and the English/Germans, and when a significant section of the English Navy began blockading the French from American ports, it was realised that they were unusually vulnerable at home.

Although the French helped finance and arm the Jacobites, and sent Irish and English troops from their army, they didn’t actually send French troops as was hoped.

The night before the battle, the highlanders marched for miles to try and make a surprise attack on the English army, but dawn broke before they arrived. Not only were they tired, but they were also hungry, whereas the English soldiers were well fed. Some of the clan chiefs advised delaying the fight, but up until then the highlanders had won every engagement, and Prince Charlie had come to believe he was invincible.

We walked around the battlefield, where the two lines are marked by rows of flags. We could see where much of the Scottish line was facing a bog, which meant that when they charged they got bunched up at one end and did not hit the English decisively. Up until then, English troops had not been trained to fight maniacs who ran right up to you with swords and battle-axes to engage in hand-to-hand combat.

At Culloden, the English were prepared, and their cannon and rifles slaughtered hundreds of Scots in the first few minutes. The entire battle only lasted about half an hour. Some of Felicity’s Campbell ancestors, who were supporting the English, were on horseback behind a wall to the left of the Scots. When the highlanders tried to retreat they chased them and slaughtered a bunch more. Many of the Campbells, including their commander Colin were killed themselves, and we visited the memorial stone for the clan.

The Duke of Cumberland, who was the English commander, earned the title of “The Butcher” by spending subsequent days killing anyone who looked like they might have been involved. After that the wearing tartan and speaking Gaelic was banned, as the English attempted to suppress Scottish culture.

The display and information centre at Culloden is very impressive. The moor itself is being restored to as near to the original condition as possible. Near the end of our tour we met a couple of men who were fixing a heather-thatched roof of a stone and peat building that was probably used as an English hospital. There can’t be many workmen with their skills nowadays.

After a morning of war and slaughtering, we decided to balance our day with a visit to the Findhorn community, a few miles to the north. We joined about seven other people for a two-hour tour led by a community member named Richard.

The community is on a number of properties, with several different ownership models. The original caravan park is still in business, and another part of the community is on part of an airforce base that is next door – the main street is known as the “runway”. The information centre is in one of the original toilet blocks where Eileen Caddy used to meditate and receive guidance. The toilet is still functional.

I was particularly interested to see the original caravan where the Caddys, their three sons and another woman called Dorothy lived at the beginning. Dorothy is now 95, and still spends much of the day walking around the community, so we saw her several times.

The community is a lot bigger than I expected, although everybody has their own house. They get about 5,000 visitors each year who come to do workshops or to stay for short periods. Everybody is expected to spend some of their time working for the community. Paid staff get some of their wages paid in Findhorn-printed “eko-dollars” which can be spent at the community shops, cafes and restaurants, and even at a few businesses in the local village including the pub.

I was amused to see the community “boutique” where unused clothes are re-cycled. Some of the buildings are amazing – a semi-underground sanctuary for meditation, houses made from old wooden whiskey barrels, and a fantastic auditorium that can hold 300 people and is used for concerts, movies and seminars.

Findhorn has survived for over 50 years, which is impressive for a community and a testament to the flexibility of its governance. Next week they are hosting a world gathering of eco-villages.

Tonight we are back in Inverness, at a camp-ground not far from the river. This is our last night in the van, which has been the perfect way to explore the highlands.

6 thoughts on “Culloden and Findhorn”