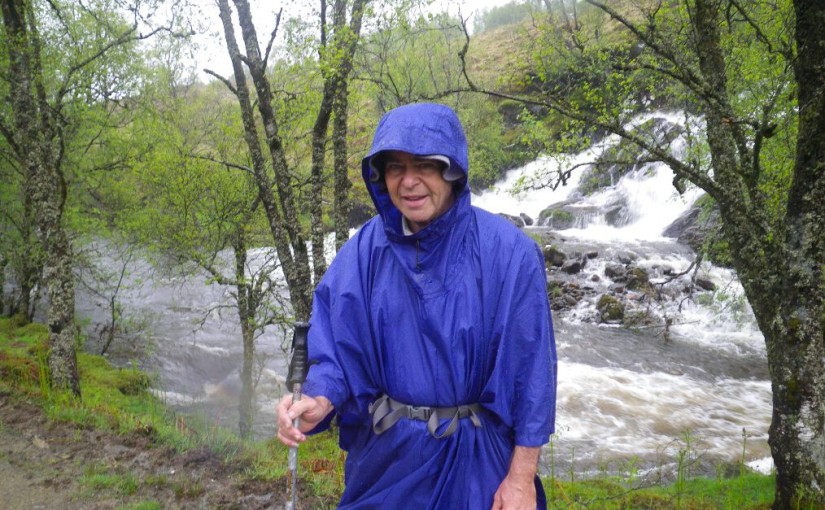 Water, water everywhere. And howling winds. We saw a waterfall spilling over the top of Glen Falloch blowing sideways instead of falling down like waterfalls are supposed to.

Fortunately today is the shortest of the trip, because the weather has been atrocious. The two English girls at breakfast decided that they weren’t up for it and caught a bus instead. It was probably a wise decision.

We backtracked briefly to take a photo of the Drovers Inn, then headed up the glen. If it wasn’t for the A82 highway, the rail line and a line of power pylons, the valley would seem fairly remote.

Fortunately the wind was coming from behind us most of the way, because it made the 7 degree temperature seem even colder. Sometimes the driving rain turned to sleet, and I wondered if we were about to get snowed on. There were hundreds of small burns crossing the path which we should have been able to step over, but they were so flooded that we had to wade through them. Some had burst their banks and were running down the trail.

We crossed under the railway via a low ‘sheep creep’, and under the highway a bit further on through a tunnel filled with English walkers smoking cigarettes out of the rain.

The Way mostly follows an old military road at this point, built by the English in the middle of the 18th century so that their soldiers could subdue the unruly Scots. The hillside we were on was very exposed, and we both started to get cold.

It was quite a relief to turn off the main trail into a pine forest out of the wind, and descend to the village of Crianlarich, where we are staying for the next two nights. We called in to the railway station cafe for a bowl of soup, and found lots of our fellow walkers doing the same thing. Several of them had decided to abandon the walk for the day and catch a train.

I read a sign this morning about the old days when drovers walked through here bringing their cattle to market. It claimed that at night they would wrap themselves up in their kilts and sleep outside. Having experienced first-hand what it’s like in summer I can only assume there was an appallingly high rate of death from hypothermia!