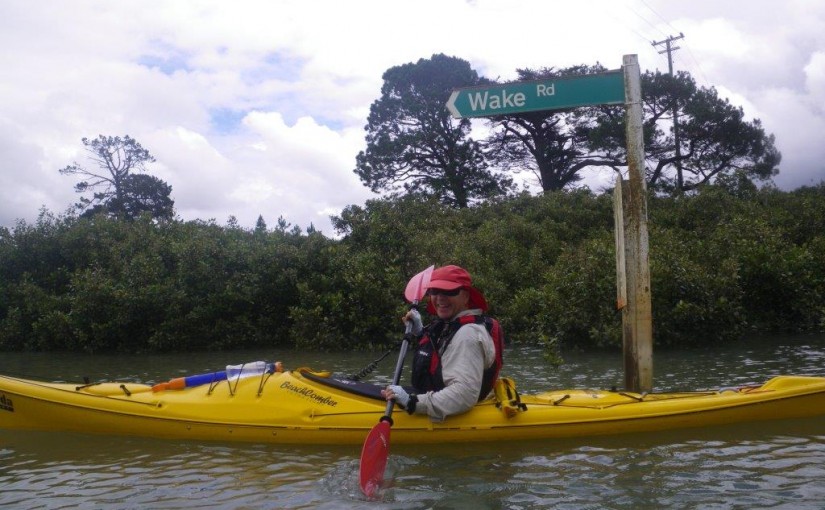 A recent newspaper article about king tides this weekend showing a photo of the Riverhead Bridge walkway under water reminded me that it has been a long time since we’ve been that far up the harbour.


My brother Ross is visiting from Vietnam, so we invited him and my nephew Callum to accompany us. We hitched the trailer with the Sea Bear to my car and drove to Whenuapai to launch at the Waimarie Rd ramp, which is usually a little less congested (and slightly closer) that the alternative ramp at Greenhithe.

The forecast scattered showers arrived soon after we set off, but it stayed warm and we didn’t bother with wet-weather gear. As we expected, the 2-manpower double kayak was much faster than our singles, so they got to stop and rest a lot more than us.

The Riverhead Ferry passed us at the mouth of the river, heading for the newly renovated pub which was already was busy with lunch guests. We continued upriver, and saw that the walkway under highway 28 was indeed underwater.

A bit further on we met a kayaker coming the other way who told us that he had turned around because of gunfire! Soon we could hear bangs ourselves, and it wasn’t long before we passed an intimidating sign warning us about the NZDA Rifle Range ahead. I figured that they would be unlikely to have a target on the banks of the river, and that the sign was warning about landing in that spot. “The worst that can happen is that we die in a hail of gunfire” I told the others to reassure them.

We made it past without any fatalities and paddled on until we reached the rapids. We might have been able to drag the two smaller boats over the rocks and continue upstream, but this was clearly as far as the Sea Bear could get so we stopped for a picnic on the bank.

On the way back down the river, we stopped to look at the fuselage of an old fighter jet up on the bank. It looks like an abandoned restoration attempt.

The Wake Rd street sign behind me in the photo isn’t really an example of the king tide flooding a road – someone has gone to the trouble of fixing the sign very professionally to a post on the side of the harbour. Our final pause was to take a look at the Hare Krishna temple, then we headed back to the ramp and home.