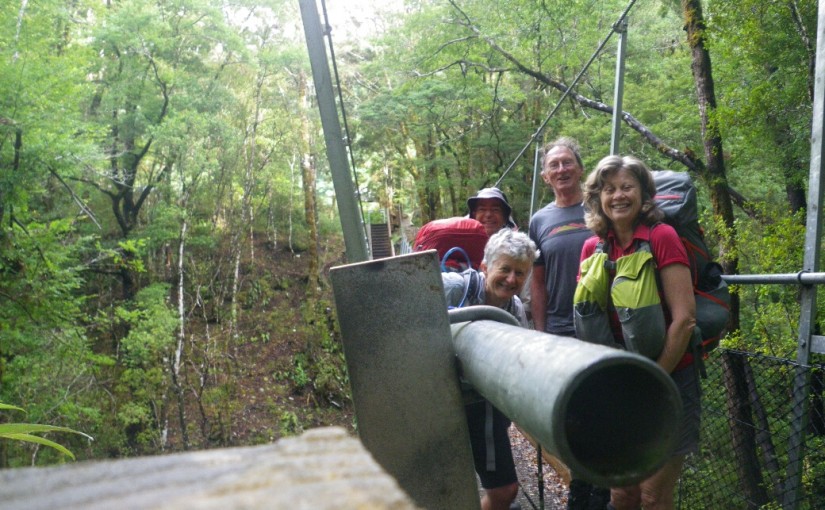 When it is finished (supposedly late 2015), the Old Ghost Road from Lyell to Seddonville will be one of New Zealand’s premier mountain bike rides. We decided to walk over it before it becomes infested with cyclists.

Our friends Jocelyn and John picked us up from Nelson airport and drove us south. As soon as we neared Murchison it began to rain, and we began to wonder what kind of trip we were in for.

Fortunately, the campground at Lyell has a shelter where you can cook, so we managed to make dinner without too much discomfort. As well as being wet, it was surprisingly cold, so we crawled into our tents soon after 8 o’clock and snuggled into our sleeping bags.

During the night, the rain got heavier, and high winds put our tent to the test. We were very glad that our gear all stayed dry.

In the morning it was drizzling on and off, and it didn’t stop until we had eaten breakfast and I had given up hope of getting the tent dry and stuffed it into the bottom of my pack.

Almost as soon as we started walking, the sun came out, and we began to feel more cheerful. This part of the trail follows an old road up the Lyell Creek, which used to lead to several small towns that sprang up in the 1870’s when gold was discovered in the area.

We climbed steadily upwards for almost 18 km, gaining almost 800 m in height. Every now and then we stopped to check out sites where towns had once stood. Sometimes there were neat drystone walls that formed the foundations of buildings, and sometimes there were old pots, tools, or the remains of leather boots. There were also lots of broken bottles – gold miners were clearly keen on their alcohol!

Several groups of cyclists passed us on their way up the hill, but there was plenty of room on the track and we didn’t feel like there was any conflict. It might have been a bit more threatening if we had encountered bikes coming down hill at high speed.

About mid-afternoon we arrived at the Lyell Saddle hut, and I spread our wet tent out in the sun to dry. The Mokihinui-Lyell Backcountry Trust has built several new huts along the trail, and we had booked their four-bed sleepouts where available.

After dinner I was brushing my teeth when the resident weka came over to see what I was up to. It came closer and closer, jumping back slightly when I looked directly at it, but clearly not at all afraid of me. I pretended not to look to see just how close it would come, watching out of the corner of my eye, till it came right beside me and (quite gently) pecked my little finger!

Most of this first day was in beech forest, which is beautiful but doesn’t change much. The hut had a great view out over the mountains, but the really spectacular scenery was still to come.