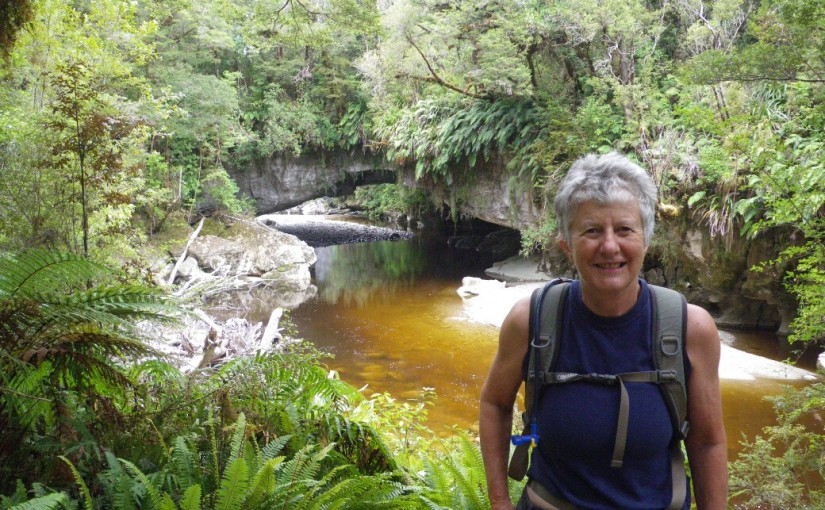 After completing our tramp over the Old Ghost Rd, we stayed in a rented house in Karamea for three nights and explored the local sights.

The first day we drove down to the beach, where we discovered that there was cellphone reception from down the coast at Westport. After a short bout of email checking, we wandered down the beach towards the sand spit at the mouth of the Karamea river. Looking at the shallow estuary, it is hard to believe that this was once a busy port before the Murchison earthquake re-designed the environment.

The sea looked a bit treacherous for swimming, so we jumped in to the water on the inland side of the dunes. Felicity discovered small pipi in the sand, so we harvested a bag full to go in the corn fritters we had planned for lunch.

In the afternoon we hiked up the Zig-zag track at the south end of the settlement, and inspected an old cemetery at the top. We met some locals clearing gorse from the trail, and the guy suggested we continue on with him and he would drive us around to where our car was parked and pick up his two women friends. The land at the top of the hill is mostly clay, and unsuitable for growing much, but there are several new ‘lifestyle blocks’ available for the unwary who don’t bother to research why the original settlement was not a success.

We were given directions to a lovely swimming hole on the Karamea river, but only the two Johns were man enough to leap in.

The next day we drove up to the Oparara Basin and met a tour guide who took us through a small part of the huge cave system in this area. The caving was pretty tame, but we got to see quite a few moa bones, and a small pile that supposedly came from the extinct ‘laughing owl’. After a cup of tea and some delicious home baking (included in the tour price), we drove back up the road to investigate another couple of caves on our own.

We discovered several small passages leading off the main chamber, and spent a happy hour or so squeezing through narrow gaps in the rock and getting covered with mud.

Next on the agenda was the Oparara natural arch, which was very impressive. We entered it by climbing down steps in a cave on the side of the arch. After we came out again, the path lead through the bush and over the top of the arch to the other side of the river. The reason the water looks golden-brown in the photos is because of tannin that leeches out of the leaves.

A couple of kilometres through the bush bought us to a mirror tarn (lake) which looked a bit on the muddy side for enjoyable swimming, especially as the weather was a bit overcast. From there it was a 500m walk down the road to the car.

Next day on our way back to Nelson we stopped for a couple of hours at the Denniston Plateau. This is an old coal-mining area, and the site of the famous Denniston incline, where they used to lower full railway wagons of coal down a cliff to the coast below. This was an impressive feat of engineering, there are lots of informative information panels showing what life was like up on top of the hill.

We drove around a bit on the way out, and I couldn’t help noticing signs for mountain-bike trails leading in all directions. One of the bikers we met on the tail suggested that eventually the Old Ghost Rd might be linked up with this area to make a loop heading back to Lyell on the Buller river.

One thought on “Karamea and Oparara Basin”