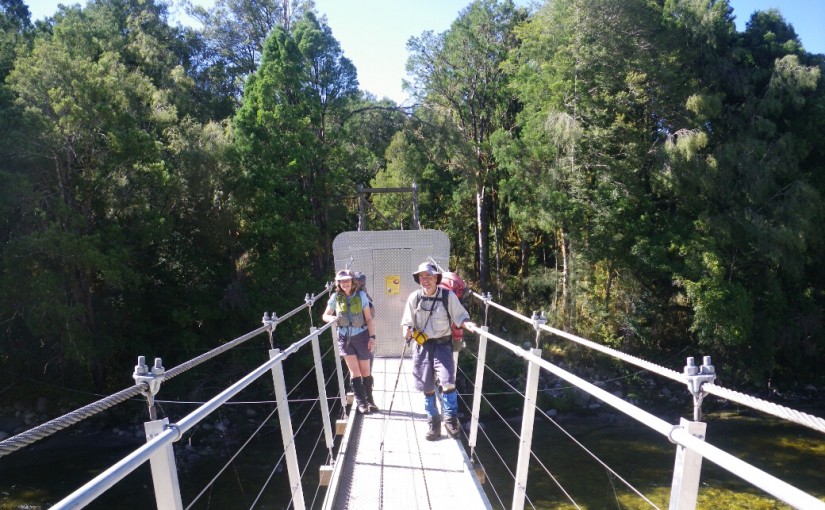 Back on the cycleway, we made pretty good time following the South Branch of the Mokihinui river down to Mokihinui Forks.

At one point we crossed a suspension bridge over Limestone Creek, and found a steel door in the centre. A notice explained the the possums on one side of the river enjoyed eating the endangered
Powelliphanta snails, but that the possums on the other didn’t, and DOC are hoping that the gate would prevent them getting the taste. I’m a bit sceptical about whether this will work, because all it would take is one possum to shout “yum yum” to his buddy across the river and it would be in vain.

The two branches of the Mokihinui create a huge flat valley system that once was farmland. In the 1930 Murchison earthquake, a natural dam turned the land into a dam for a few years and the farms were abandoned. Recently there was a proposal to build a new hydro dam across the gorge at the bottom, but this encountered widespread opposition. I remember being asked by several Green Party activists to sign a petition a few years ago, but none of them could explain where it was so I resisted.

We again arrived at the hut before lunch, and escaped the sandflies by eating in the hut. Afterwards we went for a wander across the river flat in front of the hut and had a swim in the river.

About mid afternoon two very exhausted trout fishermen arrived from down river, both wearing huge packs and pushing mountain bikes which clearly weren’t helping them much. They looked at their map, telling us “that’s where I’d had enough” and “that’s where I started to cry”.