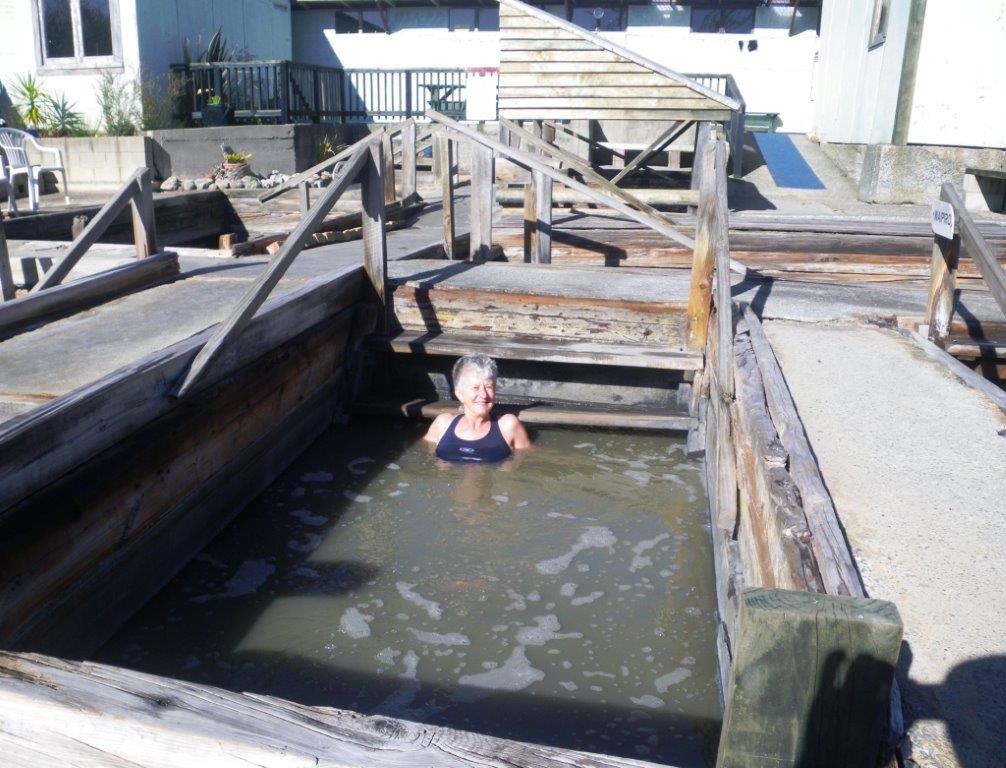 When Felicity told me she was planning to fly to Whangarei last Friday, I suggested that she forfeit her ticket and drive up with me in the campervan instead.

We parked at Terenga Paraoa Marae where she was attending a powhiri, and I headed off on my bike to explore the recently opened Hatea Loop walk/cycleway.

I started by crossing the Canopy Bridge and following the path to the south-east beside Riverside Drive. At William Fraser Memorial Park the trail leaves the road and follows the Hatea river bank. I couldn’t resist a few circuits of the BMX track as I passed, which was rather fun, even if I wasn’t riding the right kind of bike.

After crossing the new Te Matau A Pohe bridge, I detoured to the south down Port Road and explored what remains of the dock area. I guess most of the activity has moved to Marsden Point because most of the area seemed abandoned.

I met up with Felicity again after lunch and we drove north to the Bay of Islands. We have friends with a house on the coast at Orongo Bay, just after the Opua vehicular ferry crosses the harbour. It was nice to enjoy a few glasses of wine with dinner, and walk a few steps to our campervan parked in their driveway.

In the morning we took the ferry back to Opua, and set off down the newly opened section of the Coast to Coast cycleway. I rode some of this a couple of years ago with Kerry, but due to a landslip blocking the old rail tunnel we ended up having to do a lot of it by road. This time we were able to get most of the way to Kawakawa along a very easy and attractive coastal trail. The trail builders have done a great job adding to the long wooden viaduct you can see from the Pahia road. Unfortunately the last few kilometers to town do not have a track beside the railway, and I suspect they want to force everyone to ride on the train, even though it only runs four times a day.

We returned to the van and drove further north, and stopped to visit Rex and Valerie Hunton in Kerikeri. They had their home open as part of a weekend Art Trail, so they were rather busy, but it was nice to say hello.

The motor camp at Ngawha hot springs seemed like a good place to spend the night. Once we had parked we walked next door to the public pools which are pretty much the same as they have always been as far back as I can remember. I think it was probably last re-furbished some time in the 1960s. Landscaping with old car tyres, fences made of plastic pallets, and handrails made from tree branches – it is a bit of a cultural experience!

I made use of the camp barbecue to cook steak for dinner, then we watched a video on my tablet while waiting for it to get dark. The owner had told us she would turn the camp pool lights out at 9.30 but we would be welcome to stay in and enjoy the stars. She spent the next half hour unsuccessfully attempting to unblock a drain in the women’s showers, and I commiserated with her on the hardships of single handedly operating a campground.

Our second soak in the hot water was enjoyable, but not particularly peaceful, due to a very loud party of Chinese tourists, and a somewhat noisy bunch of drunk Germans. We certainly saw a lot more stars than are visible in the Auckland sky.

When I went to the dark changing rooms to get dry, there was some kind of drama going on with two of the Chinese, accompanied by a terrible smell. When they left I flicked my torch on briefly to find a huge pile of human faeces sitting right in the middle of the floor! I reflected that unblocking a drain would be almost fun compared to the cleanup job awaiting the poor owner in the morning.

We were just finishing breakfast when the campground owner approached the van and informed me that she needed a man to help her with something. My heart sank, since I had a fair idea what she needed help with. Luckily all of the mess was on a mat, and she just wanted me to help carry it outside where she could wash it with the hose. It was hard to believe that one old man could produce so much shit – I reckon he must have been backed up for at least a week before it finally let go.

Susanne had suggested we visit a place called Wairere Boulders, near the top of the Hokianga Harbour. This is a valley filled with huge basalt boulders, and is apparently the only place in the world where this occurs. The boulders are fluted with vertical grooves, thought to have been caused by acidic rain dripping through the Kauri trees and litter. We spent a couple of hours happily exploring all the paths and rock formations.

Nearby is the village of Horeke, and the 1839 Mangungu Mission House. Just in front on the edge of the harbour I spotted a pleasant looking picnic area and drove through the gate on to the grass. Which turned out to be a swamp, which meant that before I knew it the van was sinking into the mud and not about to go anywhere on its own. We both tried to push, but I could see it was hopeless. I started walking to the nearest house, but was intimidated by “Beware of the dog” signs prominently displayed on the gate.

Just then a young Maori guy in a 4WD drove past and I waved him down. He fortunately had some rope, and it wasn’t long before the van was back on a hard surface. Felicity gave him $20 as a reward then we were able to enjoy our lunch at last.

We drove south through the Waipoua Forest, noticing sadly how many huge trees are affected by Kauri die-back. We stopped for the night at the DOC Trounson Kauri Park campground, which had just opened for the summer. We hiked around the boardwalk loop track enjoying the native bush, then relaxed in the van until dinner.

As soon as it was dark, we set off around the loop again, with only the red taillight from my bike to light the way. We heard Kiwi calling, and at one point even heard one shuffling through the bush about 20 metres off the track, but did not get to see one. We did spot a huge eel lurking in a culvert under the track. After an hour or so we decided that we weren’t going to be lucky, and returned to the van and our warm bed.

My left leg is sore for some reason, so we decided to head straight home this morning and beat the traffic. It was a bit slow on State Highway 1, but before 1.00pm we were parked on the beach at Waiwera eating lunch. When we got home we discovered that a power failure had knocked out the traffic lights at Warkworth causing big delays this afternoon, so it seems we made a wise choice.

One thought on “Ngawha Springs and Wairere Boulders”