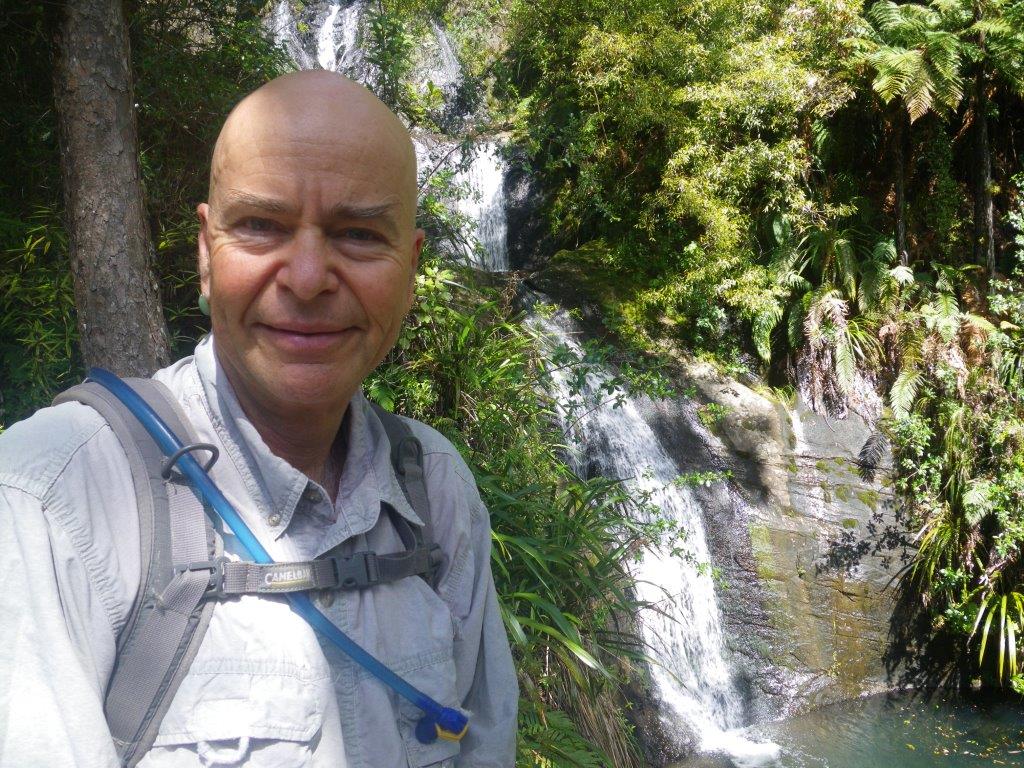 I’ve walked to Fairy Falls several times before, but always in mid summer, so there has never been as much water coming down as there was this weekend.

We drove out to Henderson Valley to meet my new niece Ariana for the first time. She was sleeping peacefully when we arrived, but after we’d chatted for a while with the proud parents she woke up demanding brunch. Ariana is so tiny at the moment, but I guess that won’t last long.

It’s not far from Alistair and Olivia’s house to the Scenic Drive where the Fairy Falls track starts. It is obviously fairly popular, and is maintained to a high standard. When we reached the falls we climbed about half way down the wooden steps then sat on a flat rock beside a pool to eat our lunch.

One brave couple jumped in for a swim, which made me think I should have been carrying a towel in my backpack. The water wasn’t freezing, but it would probably be more inviting if you had been climbing up the hill beforehand.

Past the bottom of the falls the track became a little more difficult, as a couple of slips haven’t been cleared since the winter. We also had to cross the stream a couple of times, which we managed without getting wet feet.

After a while we emerged from the bush at the carpark on Mountain Road and set off back up hill via the Old Coach Road Track. Just after crossing a couple of private driveways we reached the old Goodfellow House were the ranger now lives, and where the Goodfellow Track heads back down a kauri covered spur. This track passes through particularly pretty bush, and has a great view out over Auckland.

When I later Googled for a map I discovered the best one on Dave Woodward’s old website that I used to host when he was still alive. Nice to see it is still in existence. He was a lot more prolific photographer than us, so if you like native plants take a look.

Goodfellow track eventually joins back on to the main Fairy Falls track about 20 minutes from the top where we parked the car.

One thought on “Fairy Falls”