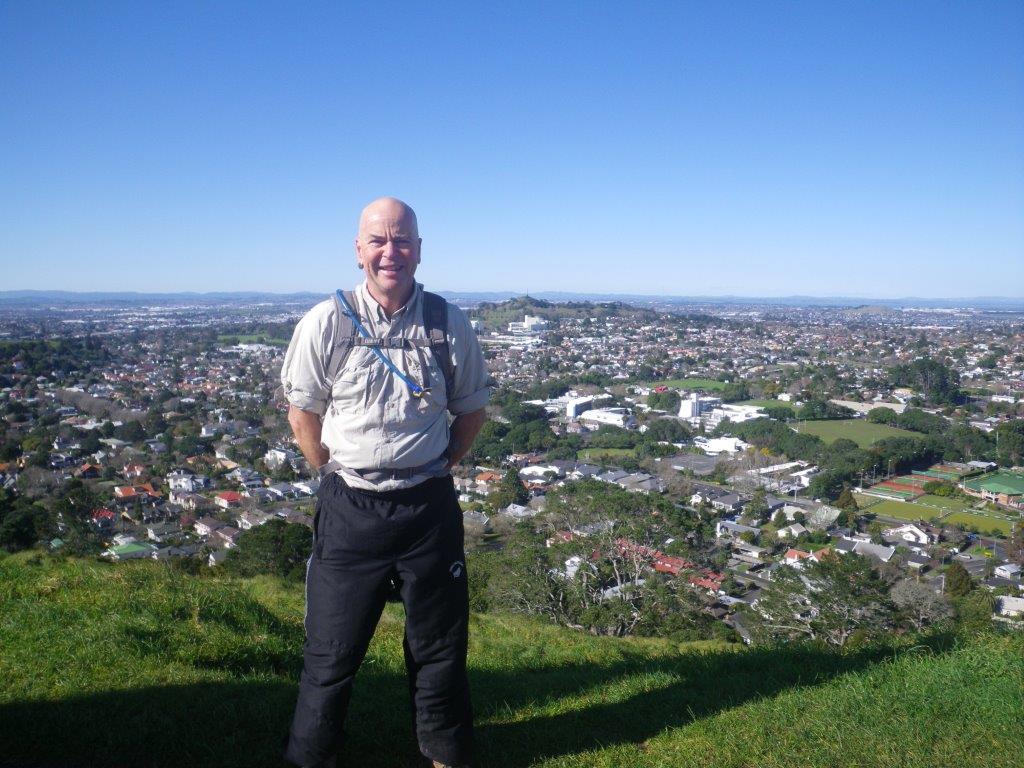 One section of the Te Araroa trail that we have always wanted to walk runs from downtown Auckland to Onehunga. Yesterday we decided that we would do it properly by parking in Devonport and catching the ferry to the city.

As the sun was shining brightly from a clear blue sky we decided to sit out on the top deck, but the air temperature was cool enough to require warm coats as you can see in the photo. By the time we had walked along Quay St and up the hill to Princess Street I had warmed up enough to pack the jacket away in my pack where it stayed until the end of the walk.

I’ve often driven along Emily Place, but I don’t remember ever walking through the little park it runs around. As we climbed the steps to Shortland St we stopped to look at the Churton Memorial, with its famous typo in the last line of the engraved inscription.

After passing the University we walked down Grafton Rd towards the bottom entrance to the domain. I was interested to see that the cycleway running the length of Grafton gully is nearly complete, and look forward to returning with my bike in the near future.

The walk up the hill to the duck ponds and across the busy football fields below the museum was very pleasant, and we passed many other Aucklanders enjoying the fine weather. Felicity looked enviously at the new University site where the old brewery used to be on Khyber Pass, she would love to be based closer to the city instead of way out at Tamaki.

There was more rugby being played across the road from St Peters College, but fortunately some of my attention was on the footpath in front of me because I spotted a nice black Macpac beanie on the footpath which will make a fine addition to my headwear collection. When we arrived at the bottom of Mt Eden the trail became unsealed for the first time as we climbed the hill above the road.

At the top we stopped next to a couple of hundred other tourists to take the obligatory photographs. I was amused by all the signs telling people to keep out of the “sacred” crated, apparently to protect the ecologically fragile environment. I’ve never thought of Kikuyu grass as fragile or in need of protection before.

About half way down the eastern side of the mountain the trail signs we had been following ended abruptly, and we found ourselves on Glenfell Place outside Government House. We knew we were supposed to end up on Owens Road around the corner so it wasn’t long before we were back on track. The streets in this area were lined with cherry trees covered with pink blossom and we saw hundreds of tui enjoying the nectar. There were also lots of huge magnolia trees with spectacular displays of flowers.

The trail lead through the middle of the old teachers’ college, currently owned by Auckland University. Felicity told me they plan to sell it and use the funds to develop their city campus. I had no idea of just how huge a property it is, there is potential for thousands of new homes, right in “grammar zone”.

It wasn’t long before we had crossed Manukau Rd and were admiring the John Logan Campbell fountain at the entrance to Cornwall Park. We walked down Pururi Drive and past the show-grounds where we could see the huge tents owned by Circ du Soleil. On our left we could see more schoolboy rugby being played and we had a brief argument when I said I remembered the old American military hospital that used be there until the mid 1970s. Felicity disagreed, saying it was where National Woman’s hospital used to be, behind Greenlane Hospital. It turns out we were both wrong as this old photograph shows – it was to the left of Pohutukawa drive but on the other side of Greenlane Rd, on an area that is now sheep paddocks.

By now it was nearly lunchtime, so we both thought it would nice to call in at the park tea-room, where I remembered being served cakes on three-tiered plates as a youngster. Alas, the cafe no longer exists, so we had to climb our second hill of the day on empty stomachs. At the top of None Tree Hill we took more photos then headed back down to Manukau Rd where we patronised the Royal City Dumpling Shop for a much needed lunch.

From there it only took us about 30 minutes to walk past Jellico Park and down the hill to the “coast” at the Onehunga Bay reserve. We couldn’t be bothered walking west and crossing the motorway, because the real coast is currently being re-developed and is behind a security fence. Instead we walked along Church St, and down the mall to the Onehunga Railway Station.

I have never travelled on this line, and was looking forward to the journey back to Britomart. I was also looking forward to trying out the flash new electric trains, which are promoted as “faster, quieter and more energy efficient”. It turned out that they only run once an hour in the weekend, which makes them rather impractical if you need to get anywhere on time, but since the next departure was only 30 minutes away we decided to wait.

I was pleasantly surprised when a train turned up right on time, and glided quietly into the station. For some reason the three carriages had four ticket inspectors in their yellow fluorescent vests, and there was an additional “transport ambassador” plus an extra unidentified staff member. The doors closed, and there was an automated announcement about staying clear of the doorways, then nothing. After sitting at the platform for about ten minutes one of the guards went to see what was wrong, and when he returned he informed us that the train had broken down. The air conditioning and lights turned off and the overhead signs started displaying computer code which made me suspect that the train was running Microsoft Windows and the driver was re-booting.

It was starting to get a bit stuffy, so one of the guards tried to open the doors, but it turns out that if anything goes wrong the passengers are trapped inside. Eventually the lights came back on and we listened to the safety announcement again, but still no movement. After more than half an hour, one of the guards told us that the brakes had failed and that everyone should get off. We milled around on the platform for a while thinking that perhaps they were organising a bus, but eventually a woman’s voice over a speaker told us to go to the bus station and find one there.

No one knew for sure where this was, but some of us had a vague idea and the rest followed behind. We couldn’t find a bus going to Britomart, but there was one heading to the Civic which seemed close enough.

We set off, but it soon became apparent that the bus driver had no idea which direction to go. Oblivious to the increasingly loud mutterings of his frustrated passengers, he drove us on a tour of Onehunga suburban streets, possibly running errands for some of his friends or family. When I realised after about 20 minutes travel that we had turned back into Onehunga Mall (a few hundred metres from where we had started), I walked to the front and offered to navigate. He rudely told me that he knew where he was going and to “sit down and shut up”.

As I walked back down the aisle, on of the the other passengers said “nice try”. When we arrived in Newmarket after about 40 minutes, most of the people from the train got off when they saw there was another rail station there. We decided it would probably be quicker to stay on the bus and walk down Queen St. It normally takes me 15 – 20 minutes to travel by car from Onehunga to the city – public transport took us over two hours.

We just about ran all the way down to the ferry buildings, because we had to get home to Albany, cleaned up, fed and back into the city to pick up tickets for a play by 7.40 PM. The next ferry was 15 minutes away, but that gave us time to enjoy a licorice gellato, so we didn’t mind too much.

2 thoughts on “Coast to coast walkway”