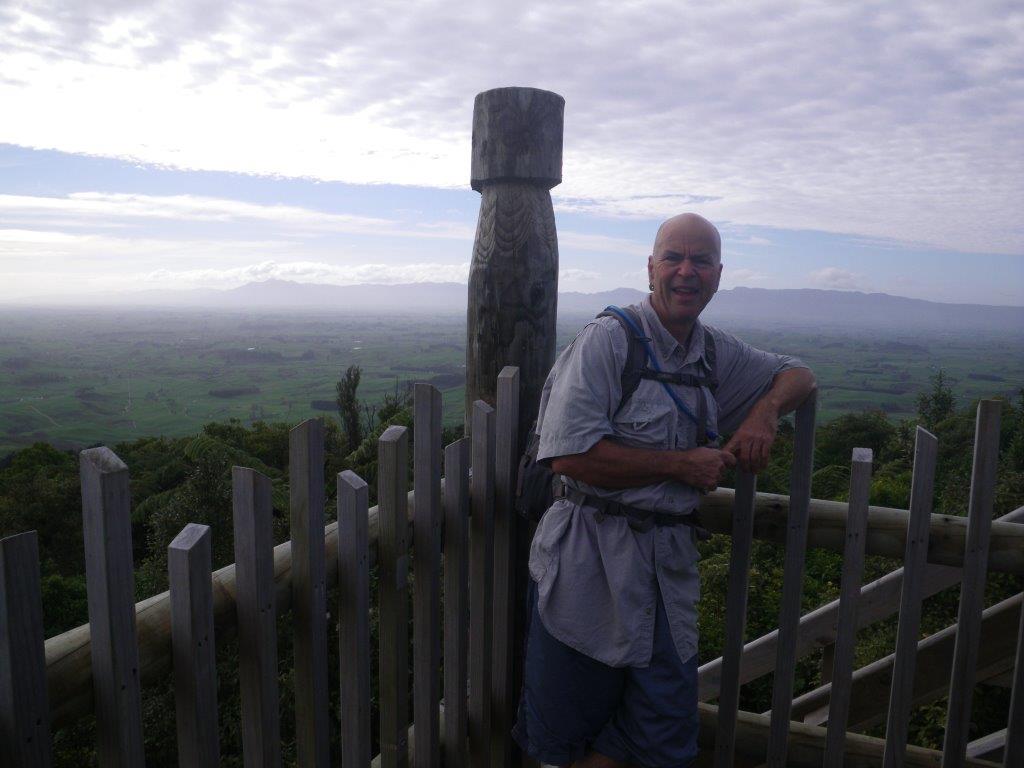 We have just returned from our first night away in the new campervan.


On Saturday we packed up and drove down to the Hauraki Plains, ending up at Te Tapui reserve about halfway between Morrisville and Matamata. By the time we had eaten lunch and put our boots on it was 3.00 PM, so when we saw a DOC sign advising that the loop track takes 3-4 hours we decided to come back the next day so we wouldn’t risk walking in the dark.

It wasn’t far to drive to Okauia hot springs to the east of Matamata where we planned to spend the night at the Opal Spring Campground. Since there was still a couple of hours of light left and we both felt like some exercise we went for a run across the Waihou river and up Te Tuhi road which climbs up into the Kaimai Ranges. There is a track from there into the forest park and I was interested to see the sign and map that I knew would be there.

It was very pleasant running in the cool of the evening, as long as we didn’t stop for more than a few minutes. We passed a high tree in a paddock with thousands of starlings settling down fod the night, which involved all of them taking to the air periodically and swooping around in a big circle ending up where they started. Or maybe the fast/clever/lucky ones got a chance of a more comfortable branch.

We arrived back at the camp just on dusk. We noticed a man lying spreadeagle on the grass, and Felicity asked if he was ill, but his wife told us he had “just had one too many” in a tone that suggested it was a regular occurrence.

Cooking and consuming dinner went well, but when I went to make up the bed I couldn’t find the piece of timber that was supposed to be under our feet, so the mattress was a bit saggy. Worse was to come; Felicity had accidentally put in only a single duvet, so we clearly weren’t going to get much use of our king-sized sleeping space.

We spent the next couple of hours soaking in the warm pools, until the management came and told us they were closing for the night. We had left the electric heater on in the van so it was lovely and warm when we got back, but not long after we turned it off and got into bed the temperature dropped alarmingly and we spent the rest of the night wishing our bedding was wide enough to snuggle up in properly. Because the middle section of the bed was missing at the bottom, our feet needed to be out at the edge to be  comfortable, but the duvet was falling down the hole, making a channel for any heat to drain out. At about 5.00AM Felicity couldn’t handle it any more and turned the heater back on.

After breakfast we had another quick dip in the hot pool to get the last chills out of our bones, then we drove back to Te Tapuhi reserve and headed into the bush. The track was a bit slippery, but it had recently been cleared so it was fairly easy going. It only took us an hour and 15 minutes to reach the wooden tower at the summit. This gave us nice views of Mt Te Aroha to the north east (behind me in the photo), and Maungatautari in the south west (behind Felicity).

We ate our picnic lunch and headed down the second half of the loop, which took us less than an hour, so the track times are for walkers much slower than us. We passed a huge crop of fungi on the way back.