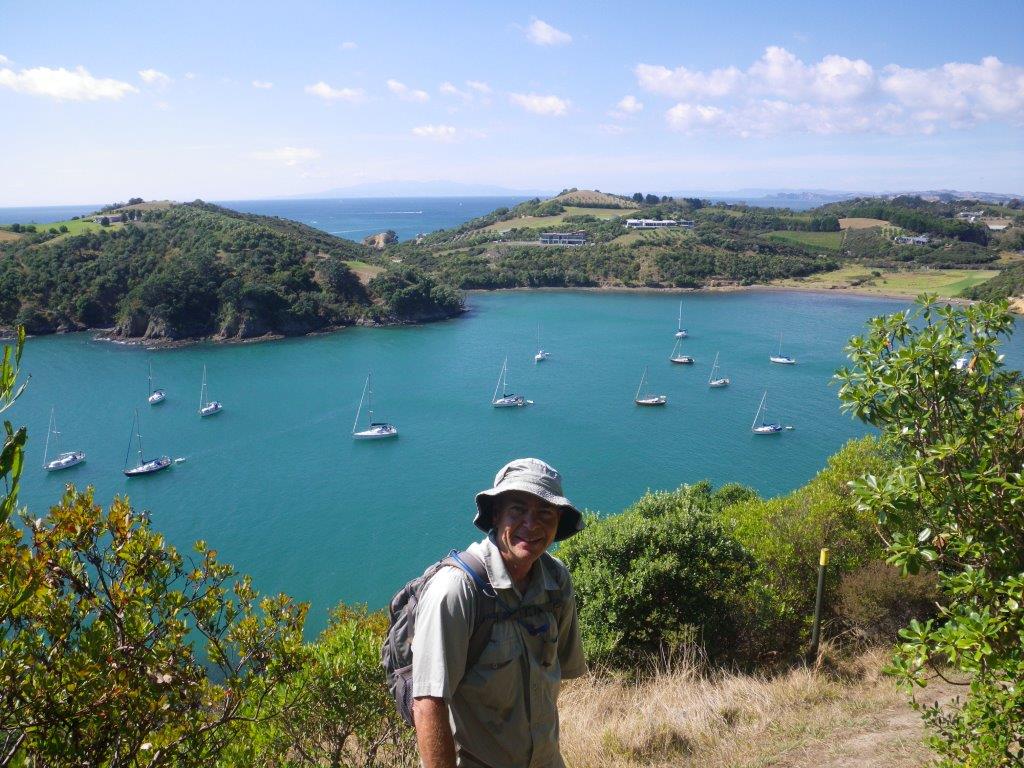 Felicity wanted to meet with a colleague who lives on Waiheke Island yesterday, so we raced into town in time to catch the 9 o’clock ferry. It was a beautiful day to be on the Waitemata harbour, and there were lots of boats heading in all directions.

My eye was caught by a very strange launch that I have seen in the distance a couple of times. It looks a bit like a submarine sitting high in the water. At the back a hatch in the side was open, and it seems the crew can drive a smaller vessel inside like a garage. As we were watching, another very strange craft with a huge bow and tiny cockpit came zooming up (unfortunately it’s not very clear in my photo).

I went for a wander up the hill behind Uma Rapiti farm while Felicity was talking in the house below. Auckland city is in the far distance.

The first half of our walk followed the coastal path where they hold the annual sculpture exhibition. Even without the artwork it is a spectacular journey.

Not long after passing the wharf at Matiatia, we found a comfortable leather couch under a pohutukawa tree, just above the high tide line, so we borrowed it for half an hour to eat our lunch.

The track on this part of the coast is much more rugged, but just as scenic. We were impressed by some of the flash houses we passed. A few even had their own heli-pads. One property had an olive grove with a small stone wall around each tree.

The coastal track ends at Owhanake (my predictive text thinks I’m trying to write “own a naked…”) but we found a newly renovated set of steps leading up hill to a trig. I don’t know if this is the highest point on the island, but the views were impressive.

We were expecting to be on the road from that point on, but another track seemed to be heading in the right general direction so we followed that downhill. When we finally did hit the road we were delighted to find that we were only a few hundred metres from Matiatia, so by 3.30 we were sitting on the wharf drinking a coffee and waiting for the ferry home.