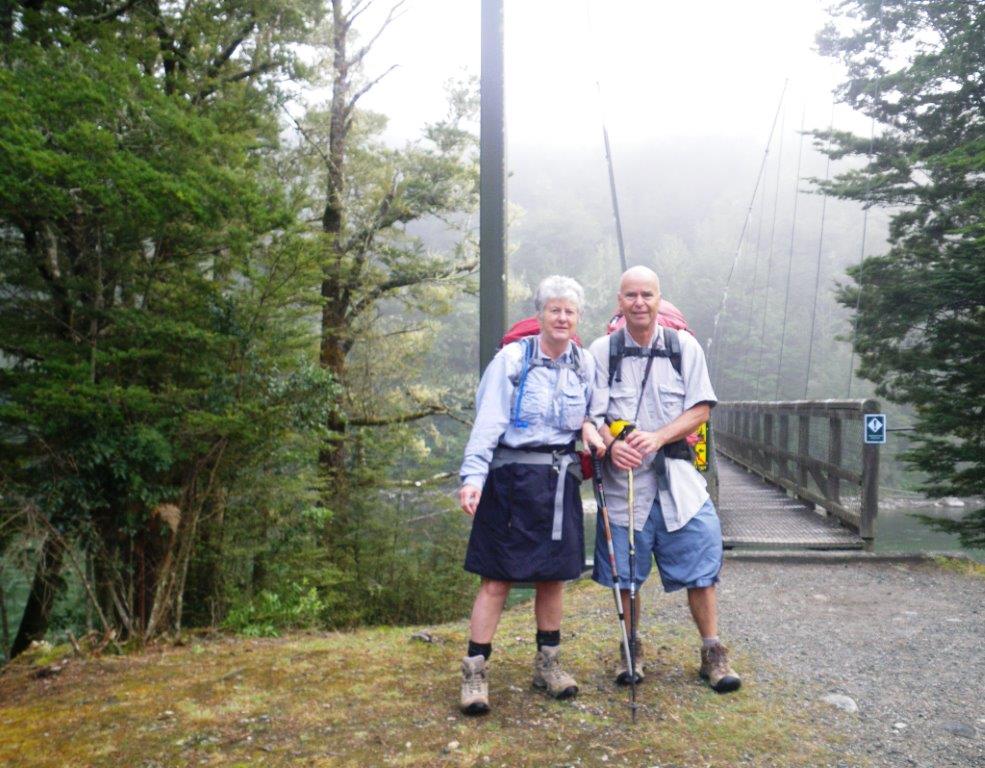 While most of NZ’s West Coast was getting battered by one of the worst storms in decades, Felicity and I have been tramping high in the mountains of Fiordland. Miraculously, we stayed dry the entire trip, although a few snowflakes drifted past when we were up near the top of Mt Luxmore.


We miscalculated slightly on the first day by getting a shuttle to the start of the track at Rainbow Reach on the Waiau river. We could have spent another three hours walking from Te Anau and still had an easy day. Most people walk this track in an anti-clockwise direction, but being Easter the huts were full and so we had to go against the flow.

The first interesting stop was a viewing platform at the end of a boardwalk extending into the attractively named Amoeboid Mire, an area of bog left behind when the glaciers melted at the end of the last ice age. There were all kinds of mosses and shrubs that don’t mind being permanently wet, including the carnivorous sundew which lives on insects trapped on its sticky leaves.

We took a short detour from the track down to the shore of Lake Manapouri, and walked along the beach to Shallow Bay hut where we stopped for lunch. From there it was less than an hour to Motuaru Hut where we were spending our first night. We found the best two bunks and spent the afternoon relaxing around the hut, which was fortunately well-equipped with reading material. We walked along the lake shore for a kilometer or so, and contemplated a swim, but decided we hadn’t worked up enough of a sweat to make it an attractive option.

As we were leaving in the morning, a kea flew down and made a serious attempt to remove the ridge flashing from the roof. The hut ranger told us that DOC has had to stop using lead-head nails on hut roofs because they are concerned that kea will get poisoned.

Day two was also pretty easy, climbing only slightly up the Iris Burn valley towards the next hut. At one point the track left the beech forest and crossed a large open area formed by a huge slip back in 1984 which must have blocked the river for a while. Again, we were first to arrive at Iris Burn hut, and had first choice of beds. We strolled up a side track to see a waterfall, and discovered the reason why the track is so well manicured; a DOC worker with a line trimmer was clearing all the ferns and grasses along both sides. This is just about the end of the walking season, so presumably it will look slightly more natural by next summer.

The next day started with a climb up to the top of Mt Luxmore, almost 1000 metres above the hut. It was pretty easy going, with flights of shallow stairs on the steepest sections. Not long after the track left the forest and started up the alpine section a kea landed on the track a few metres in front of me. It hopped down the trail towards me attempting to look endearing, presumably hoping I would be ignorant enough to feed it. It showed no fear at all, coming to within a meter of me, much to my delight.

A little further on we came to a short side track to a lookout. Another two kea were innocently sitting on a shrub beside the sign, and when Felicity suggested we leave our packs I realised what they had in their remarkably intelligent minds. We carried our packs with us to the lookout!

At the top of the hill we stopped at an emergency shelter and made ourselves a cup of hot soup. The temperature was considerably lower than down in the valley, and we were glad we were carrying plenty of extra clothing. I was particularly thankful that I made a last minute decision to chuck a pair of gloves into the top of my pack. We could see there was rain out to the west, but had no idea just how bad it was on the other side of the ranges. We noticed a few snowflakes, but otherwise it stayed dry as we walked across the most exposed section of the track.

At the second shelter we ate lunch. Some people went inside to get out of the cold, but we didn’t want to miss out on the spectacular views. After the stop I had cooled off even more and broke out the thermal underwear before continuing. We couldn’t resist making the 10 minute detour to the top of Mt Luxmore (1472 m) even though the view was only of the inside of a cloud. After that we began descending and arrived at the Luxmore Hut mid-afternoon.

This time there were lots of other trampers there before us, so we had to make do with average bunk positions. After a cup of tea, we packed an extra torch each and headed off to explore the Luxmore Cave. A small river has cut down through the limestone for hundreds of metres, and we were able to squeeze through for quite a way before deciding to turn back. We came to an intersection which looked like the most obvious way was to the left, but fortunately I had noticed it on the way in and knew that we had to crawl through the less obvious hole on the right.

When we returned to the hut we found the ranger outside giving a talk about alpine plants. It was interesting to learn about the importance of lichen, which occurs in four varieties; one specialises in photosynthesis,  one is fungal, one is bacterial and produces acidic which eats into the rock, and another fixes nitrogen. These lichens are the first to colonise any areas of new rock fall,  and provide an environment where seeds from more complex plants can get a foothold.

The main cooking/living room of the hut was swelteringly hot due to a roaring fire and almost 50 trampers cooking their dinner. Unlike most modern DOC huts which have vents that you can’t seal up, this hut is almost completely airtight. Knowing the danger of using LPG in an oxygen deprived environment, I spent the next few hours continuously opening windows that other people kept closing. When dinner and cooking was over the hut ranger gave a safety briefing which included the warning about ventilation – a bit late I thought!

When we woke the final morning it was freezing cold, and we were crunching through frost on the boardwalk leading away from the hut. I could see there was ice on the puddles and tarns. Later we learned the temperature at the hut was recorded at 2º. The views through the mist to Lake Te Anau far below were spectacular, and we were a bit sorry when we reached the bushline and entered the beech forest again. We met a German guy in shorts and T-shirt carrying a tiny bag in his hand that looked barely big enough to contain a lightweight coat. He was intending to do the entire 65 Km in one go, and didn’t listen when we tried to tell him he was taking a huge risk. I wonder if he made it?

At the bottom of the hill the track comes out at the Brod Bay campsite, where Felicity and I camped back in the late 1980s, just after the track was built. We sat in the warm sun, made a cup of tea and chatted to three young Canadian guys who were the only other people travelling in our direction.

Another hour or so of walking brought us to the control gates where the Waiau river leaves Te Anau on its way to Manapouri. Before the hydro scheme diverted most of the river flow to Doubtful Sound, this river used to have the second largest flow in NZ. After lunch, we sat for so long enjoying the warm sun that both of us ended up with pink cheeks.

From the carpark here it is less than an hours walk around the lake to the town, so it wasn’t long before we were checking into our motel. “Enjoy a hot shower” the receptionist advised us, somewhat tactlessly I thought. I guess you get used to your own stench when it builds gradually!