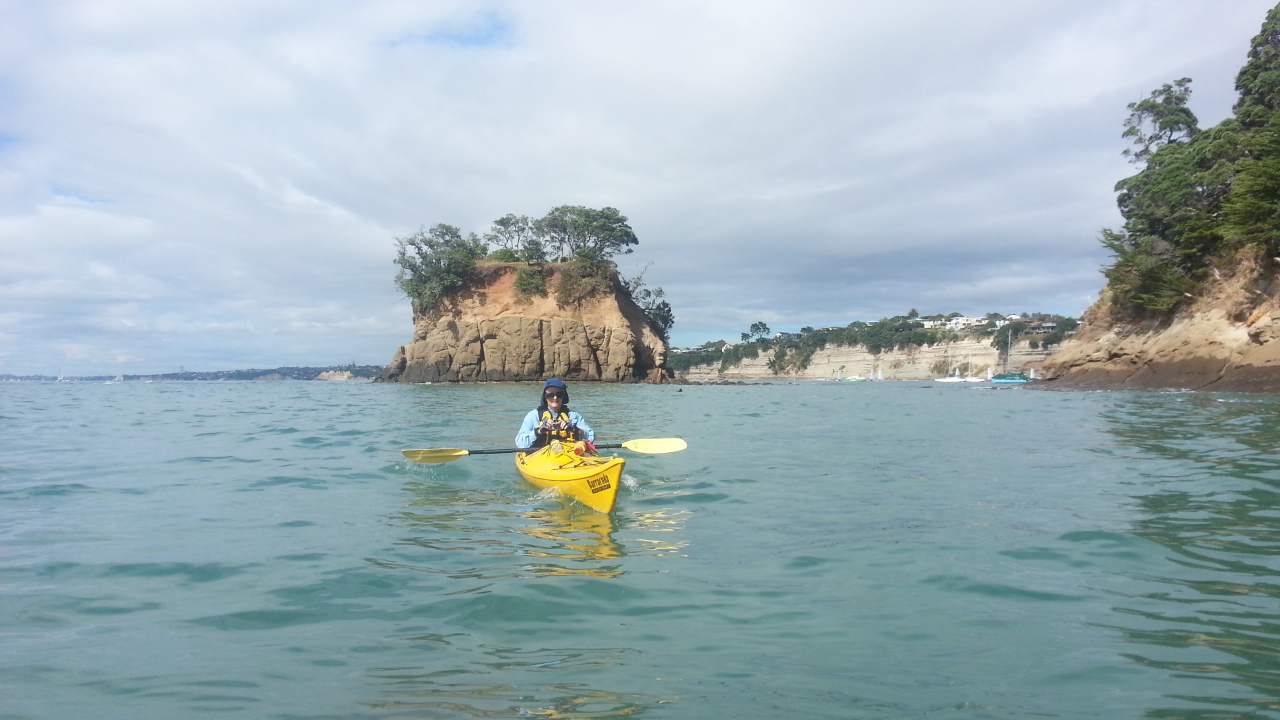 When we drove to Long Bay with our kayaks yesterday, we took one look at the surf and decided to launch at Waiake instead. Torbay was crowded with small yachts, not all of them under perfect control, but we got under way without incident and paddled north through the channel between the tor and the mainland.


This section of coast is relatively unfamiliar, so it was interesting to check out all the expensive houses sitting precariously at the top of the steadily eroding cliffs. I was a bit surprised to see guys on surfboards riding the waves breaking against the rocks; they seemed to leap off at the last possible minute before the wave crashed into the cliff.

We turned around when we reached the Marine Education Centre at the southern end of Long Bay, staying safely outside the line of breakers. We had only been on the water a bit over an hour when we reached Torbay again, so we continued south towards Brown’s Bay. We passed three other kayaks heading north, and noticed another couple stationary out at the reef, presumably fishing.

When we landed at Brown’s Bay Felicity went first, despite the fact that she was nervous about her spray skirt trapping her if she tipped out. I noticed that she lifted her rudder, but decided that I wouldn’t bother with mine, which proved to be a tactical error. I waited for a wave to surf in on, forgetting that as soon as the wave lifted my boat up my rudder would come out of the water and be useless for steering. If I had been prepared to steer with my paddle I would have been OK, but in full view of dozens of interested beachgoers the wave turned me sideways and I fell out.

Apart from my pride there were no injuries, and since the sun was shining brightly I didn’t care about getting wet. A man came down and told me that he had noticed a red object drift away, so I was able to wade back into the water and retrieve my hat before it disappeared. After about half an hour sitting in the sun eating lunch I was almost dry again, so the incident didn’t detract from the day’s enjoyment.

When we returned to Waiake, Felicity decided to try tipping over to see if her spray skirt would pop off as it is supposed to, so I landed first and waded back into the water. Lucky that I did, because as she had feared she stayed trapped upside-down and I had to quickly turn her upright again. Looks like some modifications will be necessary. It caused a bit of excitement amongst the yachting parents who didn’t realise she had flipped deliberately, and thought there was a genuine emergency happening.

4 thoughts on “Waiake to Long Bay”