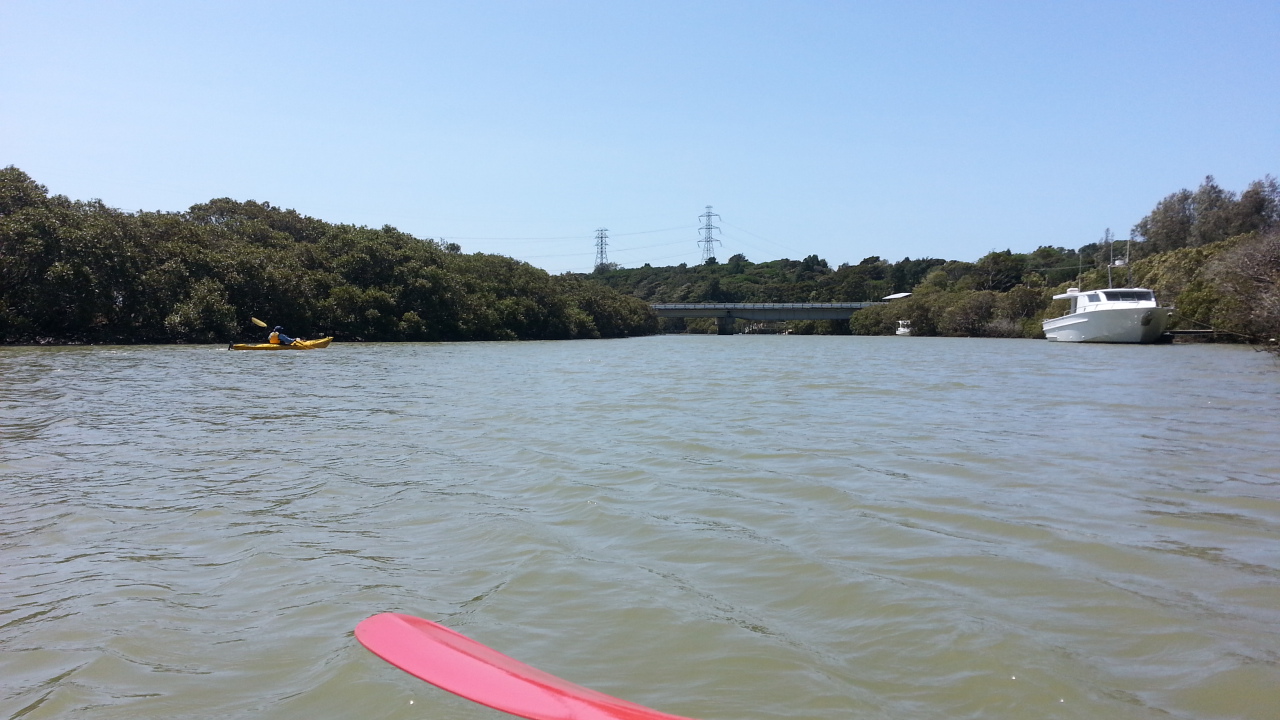 At 10.45AM this morning we launched our kayaks into the Hoteo River, at the boat ramp beside the State Highway 16 bridge.

At first we passed high mangroves on either side, but they soon thinned out and we could admire the mostly native bush along the banks. Some of the hills behind had rows of pine trees, but they only rarely come down to the waters edge.

There was quite a strong wind in our faces and we had to paddle hard in some of the open sections where the incoming tide against the wind was causing turbulence. I looked forward to coming home with the wind behind us.

We began to see few signs of human occupation: a few mai-mais and a couple of rough huts. Then a quite livable looking structure, and finally a small lodge with a outside kitchen. This turns out to be available to rent for $100 per night.

I was a bit sad to see how few of the farmers have fences along the river bank. As you can see in my photo, there are many places where cattle can get right down to the water.

After almost exactly two hours paddling, we reached a stone rapid that we would have had to portage. As it was exactly full tide at this point in time, and because we were hungry, we decided it would be a good place to eat lunch. We realised we weren’t the first people in this situation when we noticed a wooden picnic table on the bank.

We had noticed lots of small fish jumping in the upper reaches of the river, but while we were eating lunch we realised that the river was teeming with hundreds of fish, some of them dinner size. My photo barely shows two of them, even though there are dozens in the shot. You’ll just have to take my word for it.

On our way back, we passed another couple of kayakers, who had stopped to eat their lunch a couple of KM short of the rapids. We also passed a net strung under a row of floats. We discussed buying a small net of our own for similar situations in the future.

We were starting to get tired towards the end. The bloody wind had swung around and was now in our faces again!

I stopped to take a last photo of Felicity, with the bridge in the background. By the time I got my camera out of its waterproof bag she was just a speck in the distance.

Then, drama! The current swept me sideways, and up against the branches of a fallen tree. With the river now pushing hard along one side of my kayak, and the branches of the tree holding the other side firmly, I expected I was about to flip over. This wouldn’t have been too much of a disaster except that I was holding my un-waterproof phone/camera.

I stuffed it quickly back in its bag, freeing both hands. I tried hard to paddle away, but the paddle leash wound around a branch held me firmly in the danger zone. I pulled it free, and paddled with all my might. The rudder caught, I started to turn over… then the rudder pulled free and I straightened up in the nick of time.

I paddled the last couple of hundred metres and up onto tne concrete ramp beside Felicity, who hadn’t noticed a thing.