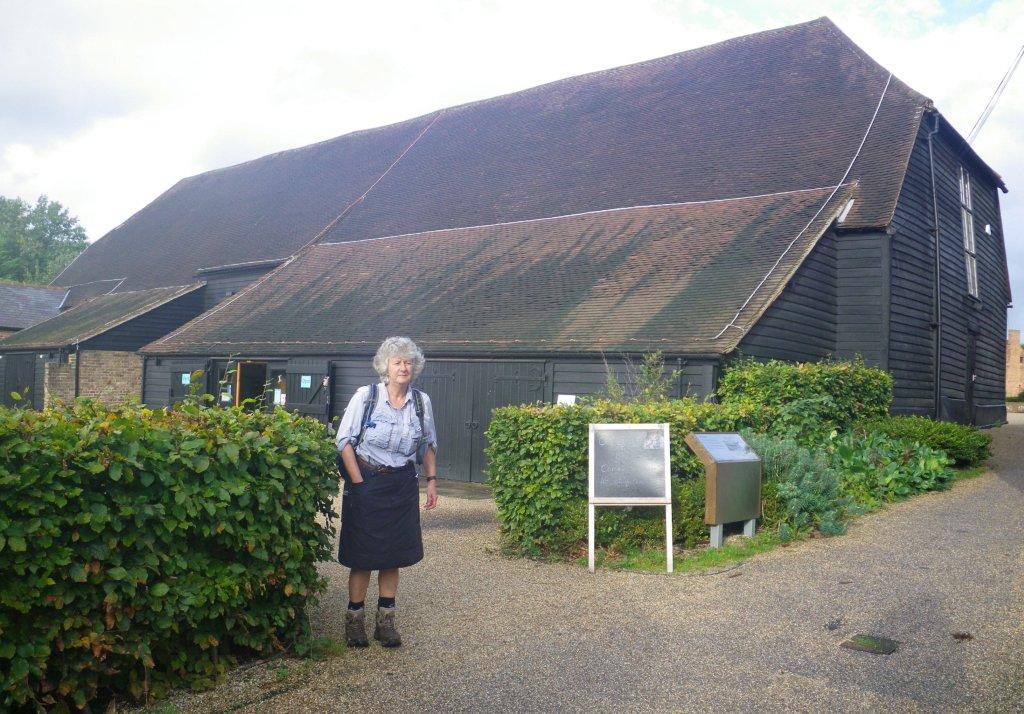 When I looked at the Google map of Uxbridge this morning I noticed a path labelled Celandine Walk, and it seemed like a good destination for the day.

The Metropolitan line in that area was closed for the weekend, but we were able to get an Overground train to Headstone Lane a couple of miles away from the start. We only had to walk a couple of hundred metres from the station before we turned onto a bridal path and set off across the fields into the countryside.

As we neared the village of Pinner, we had to walk along a few suburban streets, but it wasn’t long before we were in the centre of town, surrounded by three to four century old buildings. There was a wedding going on in the 500 year old church of St John the Baptist.

We located the start of the Celandine walk at the local domain and set off. On the far side we passed a small 19th century dog cemetery with headstones recording prizes won at shows.

After a few more suburban streets we found the Pinn river, and began following it downstream, past some well-tended allotments. The path dived into some woods, then opened out onto meadows where we would have seen yellow celandine flowers if it was spring. Instead we saw yellow leaves fluttering down from the trees.

Just as we were thinking it was time for lunch it started drizzling,  so we had to put our ponchos on. It didn’t come to much, so we ate on a bench outside the walled garden of Eastcote House. We walked around inside afterwards; it must have produced quite a lot of food when it was in business. Now it is run by local volunteers,  and grows mostly decorative plants instead of vegetables. Outside, the locals have planted several dozen varieties of heritage apple and pear trees. There are a few old trees still producing, so we harvested a couple of apples to finish our meal.

The trail made a bit of a detour to take us past some huge confiner trees, unlike any I have seen in NZ. Then back alongside the river until it opened out onto some sports fields belonging to Kings College in Cambridge. For centuries they have owned huge amounts of property in this area. Since it was a Saturday, the fields were being well used.

We crossed the river, then a couple of roads, and arrived at the town of Ruislip. Detouring up the road we came to an enormous barn. This is the oldest timber framed barn in London, and dates from 1300. It is part of a complex called Manor Farm, which has been in existence since the 11th Century. The Domesday Book records Wilward Wit as the last Saxon owner, just before the Norman Conquest when he had it confiscated.

The Normans built a Motte and Bailey fort on the site, which basically means digging a deep ditch with a wooded palisade inside it, and heaping up all the excavated material into a mound (or motte), and building a tower on top. Soldiers on top of the tower could fire arrows down on anyone trying to climb over the fence. Some of the ditch was filled in back in the 19th century, but the outline is still visible.

The property ended up in the hands of a French abbey which had numerous estates around England. They built themselves a priory and the Great Barn. The farm produced wheat, peas, beans, barley and wool.

In 1451 the entire manor of Ruislip was given to Kings College, and they leased the farm to various people for the next 480 years. In 1508 they demolished the priory and built the Manor Farm House, which still exists today. Felicity is standing outside it in photo 7. We had a look inside, and watched an informative video about the buildings which have come and gone on the site over the years. When the building was restored recently, they found wallpaper from the early 1700s behind panelling.

Ruislip itself is another attractive village, with most buildings on the high street built centuries ago. We visited the local butcher and left with a pheasant and two rabbit legs.

The path continued along the river, sometimes in woodland, but more often across meadows and fields. For a while we skirted around the edge of a golf course, then passed under a railway bridge.

We spotted another sign informing us we were at the site of Pynchester Moat. It is dry at the moment as you can see in the final photo, but it probably fills up if the river floods. This used to be a manor house that was first documented over 500 years ago. The moat was too small to be defensive; it was used for breeding fish, dumping sewerage, and firefighting if necessary. Moats were very fashionable in the middle ages. We diverted from the trail to circumnavigate the site,  which is now overgrown with trees.

It was getting late by this time, so soon after we crossed the A40 motorway on a high pedestrian/horse/cycle bridge, we turned off the Celandine Route and headed for Uxbridge. We walked to the station looking for a rail replacement bus, and found that for some strange reason it left from a stop about half a kilometre it the direction we had just come from.

The journey was very slow, because replacement buses have to visit every station on the closed section of the line, so they don’t take a direct route. We scored the front seats at the top of a double decker, so we enjoyed a scenic ride. We didn’t even mind that it started to rain again.

Eventually the bus terminated at Harrow-on-the-hill station and we went to catch a train. “The only way you can get to London is to take the Chiltern Rail train to Marylebone”, the guard told us. This meant we had to whizz through West Hampstead without stopping, then catch a Bakerloo line underground to Baker St and swap to the Jubilee line to get home.

I can report that the pheasant was very tasty, nothing like anything I’ve eaten before. Well worth $8.00 for the two of us.