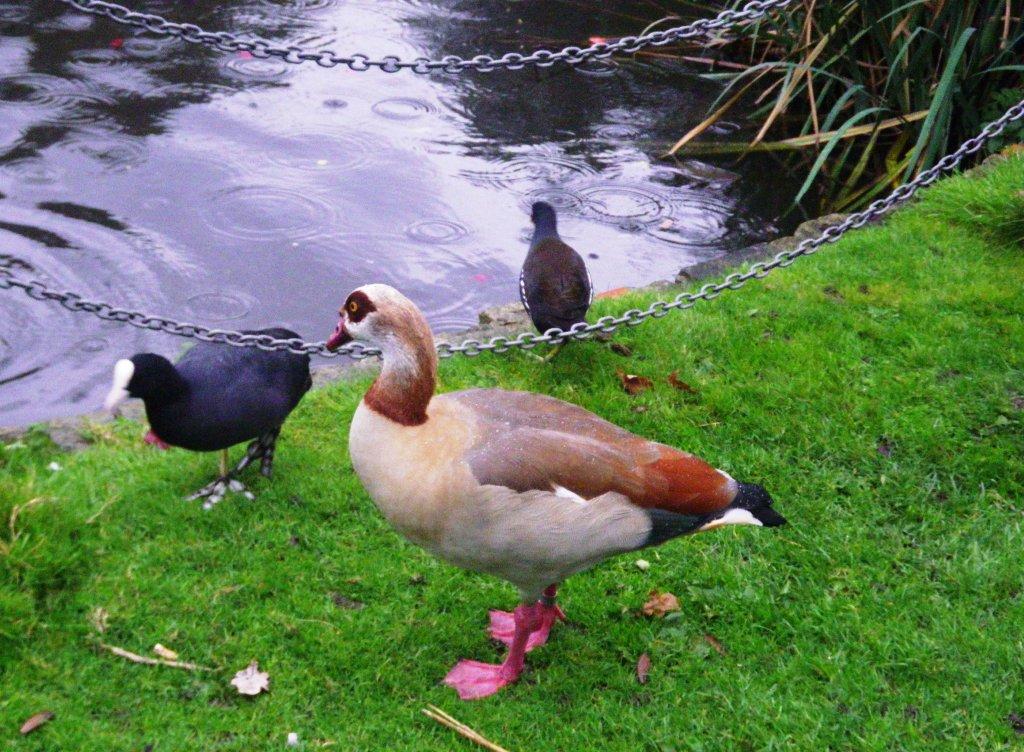 As we walked from the underground towards the Alexandra Park farmer’s market, we decided that the food we ate on our last visit was so good that we would patronise the same stalls. So we were disappointed to discover that none of them were there this week.

Since the weather is decidedly cool, we wanted something hot, so we shared a grilled chicken sandwich which was delicious, but not quite exotic as you might hope for when you are paying ten NZ dollars. Our second purchase, of a warm beef sandwich, was much better value; the extremely rare beef was just smoked without further cooking. It is supposed to reproduce the medieval cooking method of a wood burning stone oven.

After lunch we set off across the park, then crossed a few roads looking for the New River Walk we had seen marked on the map. It was rather confusing at first, because Felicity’s map showed us in exactly the right spot but with no water anywhere in sight. Eventually we found a sign pointing into a grassy park, so we followed the trail.

The mystery was solved when we crossed a road and discovered the waterway had been in a tunnel. Another sign informed us that the New River is not new, or a river.  It is a water supply aqueduct built in 1613 to supply London with fresh water, and stll in use. There was also a locked gate and a notice saying the walk was closed until further notice, but it was easy to climb over.

I had seen on Google maps that the New River and Pymme’s Brook cross, and wondered how this could be. This was explained when the aqueduct crossed a valley with the brook down below us. The route along the waterway was a bit muddy and not terribly exciting, so we turned off at the next road crossing and headed through Broomfield Park to find the real river. At a pond, Felicity took a picture of a strange looking bird which turned out to be an Egyptian Goose. I wish we had found one of them in the market.

The start of the Pymme’s Brook Trail is in Arnos Park. It had been drizzling since the start of the walk, but now the rain was getting heavier with the occasional burst of thunder and lightning. Although the autumn trees were very pretty,  we reluctantly decided to call it a day.

By the time we reached Waterfall Road it was bucketing down, and all the fallen leaves had blocked drains all over the place. The flood water in the road was soon up to the kerb, and passing cars sprayed us with water. We were quite glad to reach the warmth of Arnos Grove station, and in no time we were back in West Hampsted.