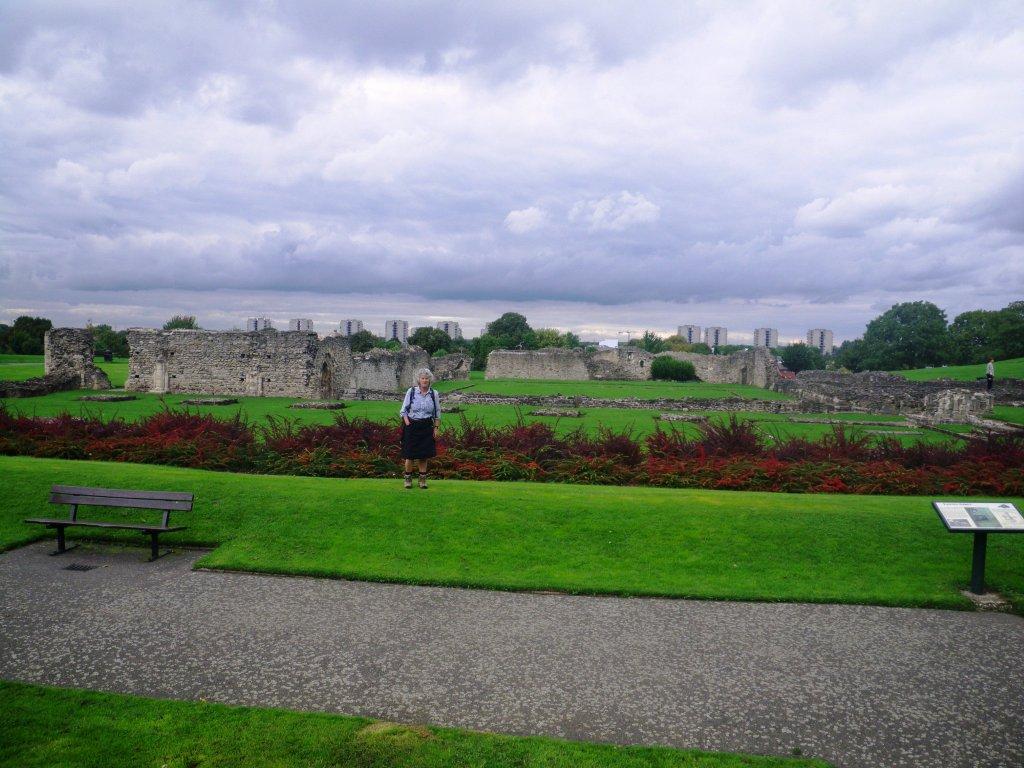 Our trip to Erith this morning took a lot longer than we expected; we spent nearly an hour parked in a tunnel until they worked out that our train could push the broken-down train out of the station just ahead of us. When our carriage finally moved next to the platform, we had to get out and transfer to a third train that was stuck behind us. I can’t imagine the chaos this would have caused if it had occurred during rush hour on a weekday!


So it was after 1pm by the time we started walking along section 2 of the Green Chain Walk. Just past the attractive Saint John the Baptist church, we crossed Bronze Age Way via a footbridge. The Way turned out to be a dual carriage motorway, so I guess it has been modernised a bit since the Bronze age.

We were very glad to find that a philanthropist named Frank Beadle had left some money for the council to purchase land back in 1920, because Frank’s Park made a nice place for us to stop and eat lunch, which was well overdue by this time. When the land first became a park it was mostly open country, but nearly 100 years later it is mostly mature forest. As we ate, we watched children playing on modern equipment that would probably be considered far to dangerous for Kiwi kids.

After a small stretch of suburban roads, we entered Abbey Woods, which is an ancient area of woodland and heath. The path lead up over a hill, where there is a mound or “tumulus” that may be the remains of a bronze age burial site. We descended a sunken track through the oaks, past areas that are fenced off to stop people damaging or picking rare wildflowers.

At the edge of the woods, we read a sign saying that there is a fossil bed nearby, which we could search with permission of the caretaker. The area was once covered by a shallow sea (before global cooling dropped the sea level), and fossils of early horses, carnivores and primates have been found. Felicity spotted the caretaker outside his shed, and asked what was involved. He told us that most of the interesting fossils are under 10ft of soil, and that tomorrow a team would come and excavate a trench down to the shell bed, then carefully sift through the layer. He said we would be unlikely to find anything on the surface, but we could have a couple of 54 million year-old shark’s teeth – which are the most common find.

The abbey ruins are nowhere near as impressive as the ones we saw in Scotland, but they were interesting anyway. The abbey was founded in 1178 by Richard de Luci, who was Chief Justiciar to Henry II, and felt guilty for being involved in the murder of Thomas a Becket eight years before. De Luci’s granddaughter’s heart was burried in the abbey as a religious relic, but it doesn’t seem to have had the desired positive effect. The abbey was never financially successful and by the 14th century had fallen into disrepair. It was closed in 1524 and the buildings gradually demolished for their stone.

The next section of the trail climbed back up hill through Bostall Woods, past some muddy ponds. At the top is another heath area, with one of the few areas of heather remaining in the London region. Some places were planted with trees in the past, but now there are efforts to protect the open heath. The path went downhill again, and emerged from the trees beside Plumstead Cemetary.

We considered stopping at this point,  because we could have walked down Wickham Lane to Abbey Woods station. I’m glad we decided to go a bit further, across the East Wickham Open Space,  because we saw two foxes! They were not in the bush area at all, I spotted the first one on a suburban street and thought “what a huge cat”. I then saw it was looking at a second animal on the footpath a couple of metres away and thought “what a huge bushy tail that cat has”. Then it dawned on me, and I told Felicity to look just before they spotted us and slunk into the bush nearby before she could get the camera out.

At the far side of the open space a man told us that we would not be allowed to cross a farm which is supposed to be part of the Green Chain. We took the recommended detour via suburban roads around it, but when we reached Shooters Hill Rd we decided we had had enough and jumped on a bus bound for Lewisham Station.