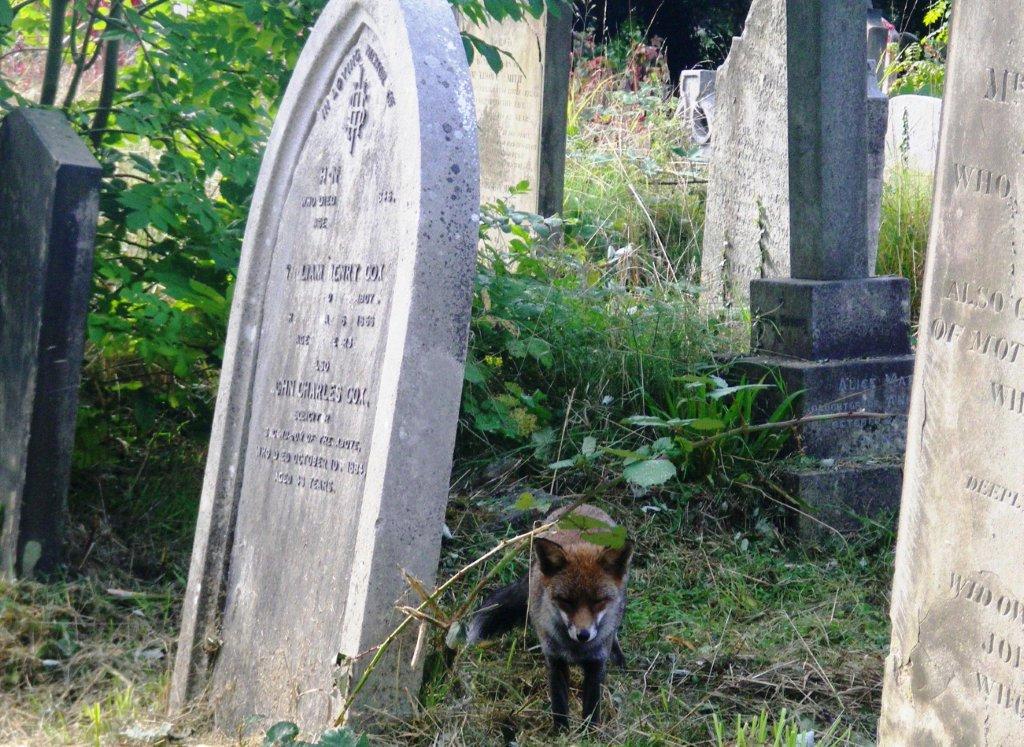 We saw another fox today, and this time Felicity got some photos!

We started our trip with a bus ride to Piccadilly Circus, because the Jubilee line was closed for maintenance. There we caught a tube to Gloucester Rd and looked for the house at No.1 Queensgate where Felicity’s great grandfather lived in Knightsbridge.

Our main mission for the day was to look for a mural he and his two brothers had placed in nearby Brompton Cemetery in honour of their father, who is buried in Scotland. Unfortunately, most of the plaques on the mausoleum walls have either fallen off or been vandalised,  so we were not successful.

It was a nice peaceful spot to eat lunch though, and seeing the fox was a big bonus. A man there feeds them, so it was not very scared of us, and let Felicity get to within 3 metres before it started backing away. It was eating something behind a gravestone, and was clearly not in a hurry to leave despite our presence. If I was a local resident I would not be too happy about people teaching foxes not to fear humans;  an adult would not be in any danger but a small child might be. The animal itself is quite small, but it has a huge bushy tail which would obviously make a great fur coat. Since it has become uncool to hunt or kill them, the fox population has exploded, even in inner city areas. Eventually a woman with a dog walked past, and the fox took off.

After the cemetery we walked down to the Thames, then headed west along the bank. The old power station on the edge of Chelsea Creek is being re-developed into expensive apartments, so that is not open to the public yet. A bit further on, there is a small harbour behind a lock at Chelsea filled with flash pleasure boats, and surrounded by apartments that could be anywhere in the world.

We didn’t get far before having to head inland around other sections which are not accessible to the public. There is a huge private park called the Hurlingham Club, which takes up 42 acres of river frontage. We poked our noses in the back gate, but a security guard glared at us with a “make my day” expression, so we made the long detour around the streets. I see the club has a ten year waiting list, assuming you get nominated by two existing members.

At Putney Bridge we came to a point on the Thames Path that we have reached from the other direction, so we caught the tube and bus home. The rail replacement bus driver got lost in West Hampstead and missed our station, so we ended up at Kilburn where we could have got to by train. Fortunately it’s been a lovely warm, sunny afternoon so we didn’t mind the extra kilometre walk.