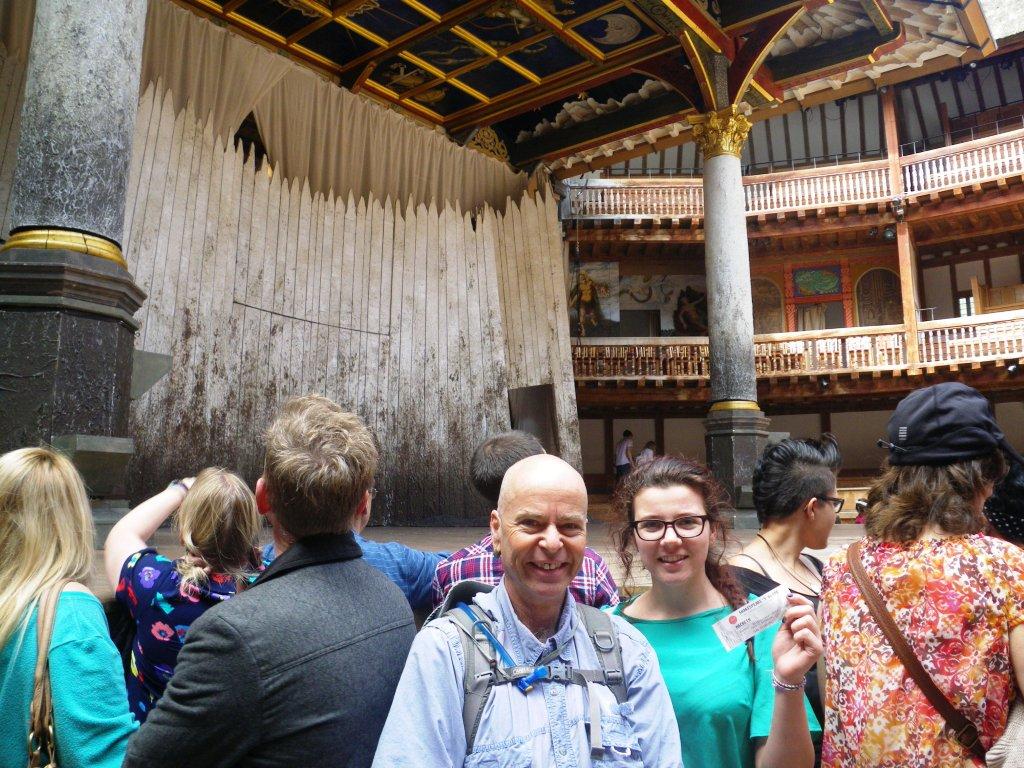 Judith has joined us in London, and one of her top priorities was to see a Shakespeare play performed in a traditional theatre. When Felicity tried to book for Macbeth some time ago the only places available were in the pit.


This meant standing for two and a half hours (with a brief break sitting on the concrete at half time), but as this is the most authentic position we were all very satisfied with the experience. We were quite close to the stage, which protrudes out into the audience anyway, so the actors were all around us. At times they came through the crowd and up onto the stage, and the witches even appeared on the balcony behind us.

There were several musicians in a gallery above the stage, and a few of the lines were sung (Double double toil and trouble), or accompanied by a beating drum. We are accustomed to performances where some of the minor parts are a bit amateurish, but today’s cast were all excellent. The only slight annoyance was a constant stream of helicopters overhead.

After the play we strolled back along the Thames, and over the millennium bridge. Some rather strange blue trunked trees turned out to be an installation by Australian artist, Konstantin Dimopoulos for the London Festival. We poked our noses into the crypts of St Pauls, then took a lift to the top of the One New Change building, where a rooftop terrace gives a great view of the cathedral.

We were on our way towards the tube at Tower bridge when we noticed the tide was out, and decided to let Judith enjoy a spot of mud-larking. Felicity had read that this section of the river has a great many pieces of broken smoking pipes dating from the 16th century, when they were cheap enough to be disposable. Sure enough, we were able to find dozens of pieces, including a couple of bowls and some with designs. Judith is planning on making some bracelets.