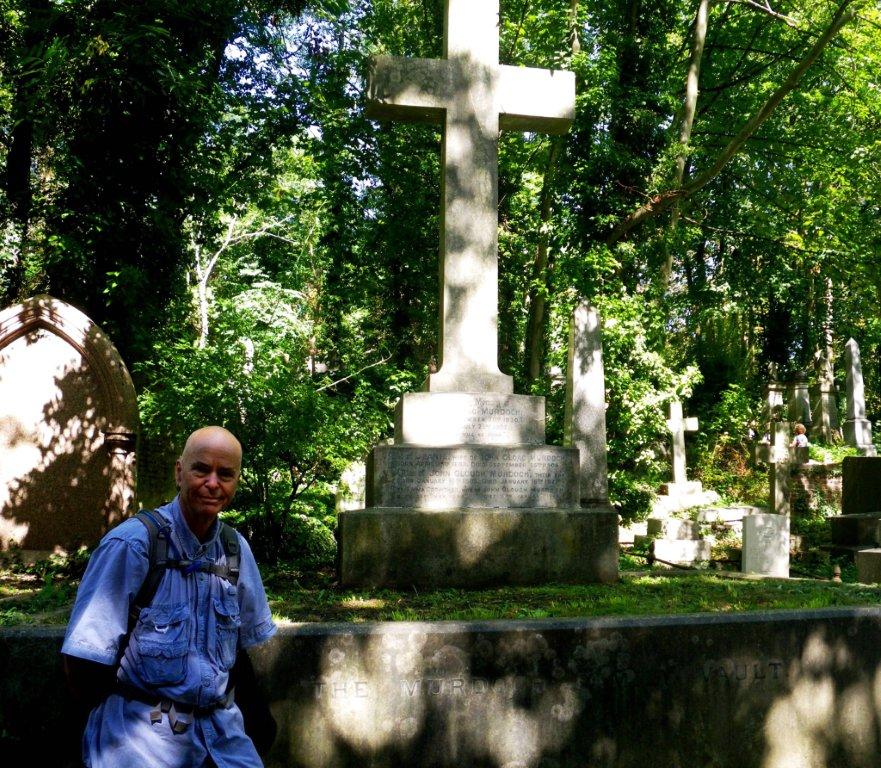 I would never have imagined that an hour and a quarter guided tour around an old cemetery could be so interesting. I would have happily continued for twice as long.


Highgate Cemetery was built in 1839, following a population explosion in London which meant most of the traditional churchyards quickly filled up. In those days cremation was illegal, so many poor people ended up with bodies at home for weeks or months while they tried to find a place. After public protests, the law was changed to allow a private company to manage graveyards, and the London Cemetery Company was established. They built seven large cemeteries around the perimeter of the city, of which Highgate was the most fashionable. It cost the equivalent of £40,000 for a plot!

Poor people did manage to get interred at Highgate, but they are under the paths and roads, with no markers. In total, approximately 170,000 people are buried there.

Unfortunately the company went broke in the 1920s, and for the next 50 years the cemetery was closed up and became dilapidated. Graves were robbed by Satanists, and some were dug up by vampire hunters who believed Dracula was buried there. Even children broke in and defiled some of the bodies. What had once been a magnificent lawn cemetery became an impenetrable jungle of large self-seeded trees.

In the 1970s, the property was bought for £50 by a group of little old ladies, who formed the Friends of Highgate Trust and began a long restoration project that continues today, financed by the £12 entrance fee that tourists pay. It is worth every penny, and I suggest this tour should be high on the list of any visitor to London. Our guide was very enthusiastic, and extremely knowledgeable, being an ex BBC reporter.

The Victorians were very fond of symbolism, and we learned the significance of broken pillars, piles of rocks, and upside-down torches. The Circle of Lebanon, a series of underground tombs surrounding the only tree that was retained by the original landscaper was particularly interesting. Likewise, the Egyptian Avenue with its tall pillars was also impressive.

We were even allowed into the catacombs, where we were right up close beside the old lead-lined coffins.

When the tour of the West Cemetery was over, we were given a map to explore the East Cemetery across the road. We passed the grave of Douglas Adams (of Hitch-hikers Guide fame), and a Murdoch family plot that may belong to some of my distant relatives.  The most famous grave of course is that of Karl Marx, which is topped by a huge sculpture of his head.

After two hours of looking at graves we were ready for lunch, so we popped in to the park next door and sat on a bench near the pond. We then walked back through the Heath to the pergola, part of a large garden built by philanthropist Lord Leverhulme in 1904. The formal gardens surrounding his house are very impressive, and the long raised structure covered in climbing plants is quite exotic. As we explored, we interrupted a fashion photographer making use of the location.

Felicity was heading out to Heathrow to pick up Judith, so we walked down the hill to Golders Green, the nearest tube station. As luck would have it, the Northern Line is not operating today, so we both caught the replacement bus back to Finchly Road station on the Jubilee line and went our separate ways.