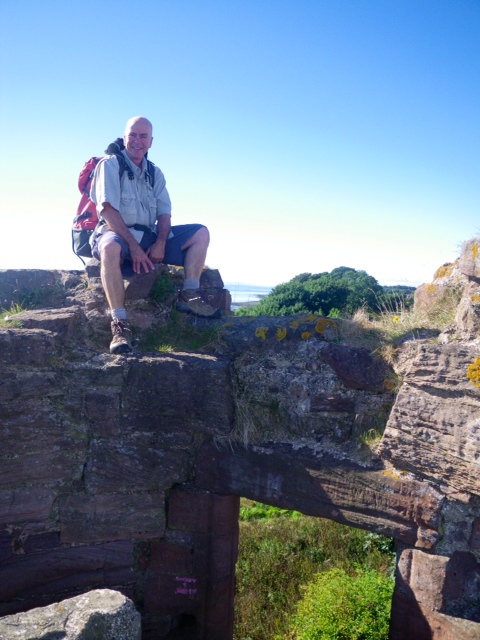 I intended to be restrained this morning, and ordered bacon and eggs instead of the “full Scottish breakfast”, but when Felicity asked for haggis I succumbed to peer pressure and asked the waiter for some as well. She only ate half hers, and Judith didn’t eat any after a Google search informed her what it is made of. So after polishing off the lot I was in need of a lot of excersise today.


We caught a bus to Buckhaven, which is near where we left the Fife walkway yesterday. The first mile or so was along an old railway, which meant we could enjoy the coastal views without having to look where we were going.

Our first stop was the ruins of Macduff Castle, which is presumably where his family was slaughtered by Macbeth. There once was a metal grill across the entrance to the spiral staircase, but most of it has been cut off, so we decided to explore. First we went down into the dungeon using our torches carefully picking our way through broken glass and empty beer cans. Then we climbed to the top of the tower, where we were rewarded by a spectacular view. I’m sure that if this ruin was in NZ you wouldn’t be allowed near it, let alone be able to go inside. Fortunately for us, it didn’t collapse today.

The path led down the hill to East Wemyss, where we found a sign telling us about the famous Wemyss caves in the cliffs below the castle. The first one we came to was a big complex called the Court caves, with old brick pillars supporting the roof. I climbed over a fence and endured some stinging nettle to look at the entrance, but there were so many “Danger – Keep Out” signs that I decided not to go in. Next door was a cave with dozens of small shelves cut out of the walls designed for birds to nest in, presumably pigeons intended for food.

The next few caves had metal grills with doors, but the locks had been cut off so of course we went inside. There is one directly under the castle that used to have a well at the back, and a passage leading up to the dungeon, but there is no trace today. One had a very low entrance, but opened out into a huge room with a clean level floor that would make an ideal camping spot.

The final pair of caves had what I had been hoping to find. Amongst the modern graffiti “Billy was here, etc.”, there were carvings made by Picts back around 300AD. One of them I thought was a crude spaceship (of recent vintage), but when I checked the information sign later on I learned it was an ancient salmon.

We detoured up to the main road to find a shop where we could buy food for lunch, then walked back down to West Wemyss and rejoined the coastal path. The next castle is in private ownership, and we could see by the steel bands around the tower and the concrete filled cracks that it is no doubt a maintenance nightmare. It must be cool to live in though!

After lunch we climbed back up onto the top of the cliff, where we passed the steel framed pit head winding gear of the closed Frances Colliery. This was one of the last deep coal mines in Britain, exploiting coal seams that extend out beneath the sea. It was shut down by Maggie Thatcher after a bitter strike back in the 1980s.

Soon we were back in Dysart, where we are staying for two nights in the Royal Hotel. It was a very flash place back in the late 19th century, but rather run-down these days. Judith left us to do some study, while Felicity and I continued on the tourist trail.

The old town hall is actually quite recent by British standards, having been built in 1887. There was a very interesting exhibition inside about the town’s history. Now Dysart is a quiet suburb of Kirkcaldy, but a hundred years ago there were dozens of shops and businesses. Next door is a tollbooth built in 1576, which was a public weigh-house and prison. Unfortunately we were not allowed inside.

We almost weren’t allowed out of the museum either. As I was starting down the steps a woman started shouting at me to stop, and I eventually got the message (Scottish accents are not always easy to understand) that she was a plain clothes policewoman. She asked me if there was another way out of the building, and said that the steps were a crime scene. The museum was closing and lots of other people were following me down the steps because it was in fact the only exit. People were also walking along the street through her crime scene (a few drops of blood on the steps), so she was starting to get quite agitated. When she turned and asked for help from a uniformed officer, a boy on a skateboard zoomed right past the end of the steps. She realised at that point that she had to accept the inevitable and told us that we could come down but to keep as far from the stains as we could. We didn’t hang around to find out any more.

Dysart has a pretty little harbour surrounded by high cliffs. We walked around the edge, then through a tunnel cut into a rocky headland. There are only a few fishing boats now, but once this was a busy port exporting coal and salt. Other major manufacturing industries that have now gone include shipbuilding, linen weaving, carpet, lino, and golf clubs.

The path continued through a huge park, past a well preserved dovecot to the final castle of the day at Ravenscraig. This was commissioned by James II for Queen Mary of Guelders but he was killed before it was started in 1460. The queen moved in when the east tower was finished, but it passed into the hands of the Sinclair family before it was completed. It must have been a magnificent residence before it was badly damaged by Oliver Cromwell and his English troops when they invaded in 1650. The final owner was linoleum magnate Sir Michael Nairn who gave the entire estate to the town for a park in 1929.

On our way back to the hotel we saw a man eating a handful of small berries off a nearby tree. Of course we sampled them and discovered they were delicious,  a bit like a ripe persimmon. There is a hard seed in the middle that we spat out. I’ve just learned via Google that they are from the Yew tree, and considered quite dangerous. The seeds are deadly poison. It is recommended that you try just a couple of berries and see whether you can tolerate them. I’ve tolerated about a hundred for almost three hours, so it looks like I’ll live. Fingers crossed!