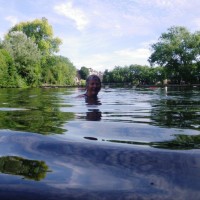 Ours plan for this afternoon was to visit Highgate Cemetary, but when we arrived we found that you have to book a tour on weekdays. Just across the fence is Waterlow Park, so we decided to explore that instead.


The 26 acre park was given to the public in 1889 by Sir Sydney Waterlow, as “a garden for the gardenless”. There is still a kitchen garden with each bed maintained by different groups such as local schools. There are a couple of ponds, and many beautiful mature trees. Because it is up on Highgate hill, there are some great views down over the city.

Outside one of the gates, we saw an unusual domed building, which turned out to be St Joseph’s Catholic Church. The domes are actually green, but my photo is a bit over-exposed. The park was full of people enjoying the outdoors, including some actors practicing Shakespeare.

We walked up a lane past a high radio transmitting towers, and across Pond Square (which wasn’t square and didn’t have a pond), them down Hampstead Lane for a few hundred metres until we came to the entrance to the Heath. We decided to explore the eastern boundry, so we took every turning on the left.

We stopped several times to eat blackberries. Felicity decided to do some serious harvesting, and while she was filling a plastic bag, a man stopped and told her he had done the same thing recently, and that she must eat them with clotted cream, preferably of the Cornish variety.

We had packed our swimming gear, but when we came to Highgate ponds, we discovered the bathing pools are strictly segregated; “No men allowed beyond this point, etc.” That didn’t seem like much fun, so we continued on towards Gospel Oak, where we had seen a ‘secret garden’ marked on the map up on Hampstead Lane. I guess if it was easy to find it wouldn’t be secret – it certainly wasn’t on any of the maps near the bottom, and we had to abandon the search.

I was intrigued by an old sign on a building that said they catered for “bean feasts”. I’ve just Googled it and discovered that it refers to an annual picnic for employees, usually held in a scenic spot. They are also known as a “beano”, a name I recognise from a comic I read occasionally as a child.

We headed up to the top of Parliament Hill, where we had another excellent panorama of London below us. In the second photo of Felicity, you might just be able to make out the green dome of St Joseph’s on her right, and the radio mast on her left.

A little further on, we arrived at the Hampstead Heath ponds, one of which allows mixed bathing. We wondered whether paying £3 to swim in a muddy pond would be worthwhile, but it was most enjoyable. Those are my legs diving in. The lifeguard told us afterwards that we were sharing the water with at least half a dozen species of fish, as well as the ducks and swans that we could see. I hope I didn’t swallow much!

One thought on “Waterlow Park and Hampstead Heath”