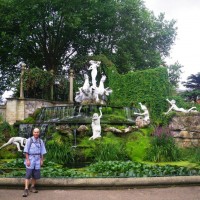 Today Felicity and I travelled to Twikenham to visit Erin Pizzey, who is one of our heroines for her groundbreaking work on Domestic Violence. We arrived half an hour early, so went for a stroll around nearby York House.

I paid a visit to a Victorian toilet, and was amused to see the message cast into the panel above every urinal “Please adjust your dress before leaving”. Presumably there was a serious concern about men walking out with their penises visible! As you can see, I made doubly sure I was decently attired.

We wandered through the gardens, which have a public road behind high brick walls running through the middle, and a bridge crossing it leading to what must have been a private jetty on the Thames. An old beech tree had a notice on it informing us it is one of the “great trees of London”.

We then discovered a rather remarkable fountain. The naked ladies were part of a large collection commissioned by a con man who went bankrupt and subsequently ‘died’ while they were still in their crates. The statues were purchased and installed by the Indian industrialist Ratan Tata at when he owned York house at the beginning of the 20th century.

We had a very interesting and stimulating visit with Erin, which I plan to write about on MENZ.org.nz soon. We left her place just after two, and stopped for a quick picnic at a park in nearby Richmond, before catching the train back into town.

Felicity is trying to locate an old book written by her great great uncle, so we headed to Grays Antique dealers in Mayfair. These days building is mostly inhabited by dealers in Islamic art, and the rare book sellers are long gone. We decided to have a quick poke around, and were intrigued to find that the building has a very interesting history when we visited the basement.

Back in the 19th century, the building was owned by a plumbing supply merchant John Bolding, who competed with Thomas Crapper to be the biggest supplier of porcelain toilet pans. The building was derelict for many years, and when it was restored by Bennie Gray in the 1970s the basement was filled with water. When it was pumped out, they discovered the lost river Tyburn, which these days flows entirely through culverts to the Thames, except for the section through the basement of this building. The water is remarkably clean, and home to dozens of goldfish.

One of the fascinating things about London is that each area is home to different cultures, and it is obvious that many of the city’s Arab population live in Mayfair. We saw lots of women in full burkas, which must be pretty uncomfortable in 30º heat.

We called in to Selfridges to browse around, but decided it is a little up-market for the likes of us. I glanced briefly at a fairly ordinary watch, and saw it cost almost $4, 000! This was presumably one of the cheaper models – I could see locked cases behind the counter where the expensive varieties were displayed. Felicity sampled a couple of different types of sweets, but wasn’t tempted to invest. She tried to convince me to buy four tiny quail on special for £3.99, but from what I could see there would hardly be a decent mouthful on one; I reckon I’d need at least half a dozen for a decent feed.

Our next stop was at Hamleys toy store, which I found rather hellish, considering it is the school holidays. There were lots of interesting gadgets and toys, but I was glad to get back on the street.

Further down Regent St we discovered the interesting Tudor style Liberty Department store, and as it was 5pm we were lucky enough to see George on his horse chasing the Dragon as the clock struck the hour. You don’t have to walk far to see interesting sights in this city!

2 thoughts on “Twickenham and Regent St”