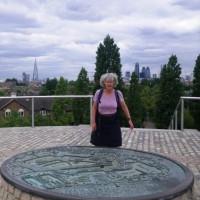 This afternoon we visited the Surrey docklands, on the South side of the Thames. A few decades ago it was an area where no sensible tourist would dare venture; now it is the location of the London Hilton.

We walked around the two remaining docks, which are closed to shipping and home to numerous water birds. Google helped us identify some cormorants living on an artificial floating island.

The area used to be where logs floated from as far as Russia were delivered to London. By keeping them wet, they didn’t split, and presumably the salt helped preserve the timber. Flash apartments have been built where the docks have been filled in, and all the streets are named after trees.

We wanted to check out Stave Hill Ecological Park, which clearly offers many educational opportunities for local school kids. As you can see from the photos, there is quite a large area of bush on what was an industrial wasteland up until the late 20th century.

We made our way down to the Thames path and followed it around to the west, except for a detour inland where the Hilton has managed to block access to the river edge. We found a rare set of steps down to the river, and as the tide was out we climbed down to the sandy shore. I fossicked around briefly in the hope of finding a Roman artefact, but the best I could manage was a rusty headlight that might have come from a 1950’s Morris Minor.

Our plan was to walk through the Rotherhith Tunnel under the Thames. There used to be a spiral staircase on each bank, but the vehicle traffic made walking unpopular so they have been closed off. The footpath is still there for stubborn people like us, so we found the vehicle entrance and set off. We had to breath a lot more carbon monoxide than I would have liked, so I wouldn’t recommend this walk unless you are really keen on tunnels. We stopped in the middle to contemplate how long it would take to run more than 800 yards if it sprung a leak.

We were feeling rather dizzy by the time we completed the 1.5 km walk, so the fresh air was very welcome. We watched a yacht passing through the mechanised lock leading to Limehouse Basin, then walked around the edge admiring the numerous boats before catching the docklands light railway home.