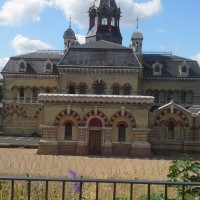 I caught the train out to Stratford at 10 o’clock this morning, which is the earliest I am allowed to take my bike. I arrived at a very modern Westfield shopping mall, and set about finding the greenway marked on the map.


My GPS insisted I was in the right place, but this is next to where the Olympic Stadium was built, and the surrounding area is now being re-developed. I had just lifted my bike over a concrete barrier when a security guard hurried over and told me that I would have to ride down some busy roads and around a tall building in the distance.

I eventually found a path beside a small waterway, but after only a few hundred metres I was back on a suburban street, thankfully with little traffic. I stopped under a railway bridge to check the map again, and was puzzled that the GPS told me I was on the path already. Then I noticed a narrow flight of steps on the other side of a gate leading up through some scrubby trees, so I lugged my bike to the top to see where they lead.

It turns out that the greenway is a 4m wide, sealed path following the  course of a disused rail line, with a strip mown grass on either side. There used to be a pedestrian bridge leading to the stadium, but this must have been removed, so the entrance is no longer at all obvious.

I thankfully started riding east, but soon stopped to take a photo of an amazing building. A bit of research informed me that it is actually the Abbey Mills sewerage pumping station, built in the 1860s by Joseph Bazalgette. It has been described as the ‘Cathedral of Sewage’. It has pumps that are still used in an emergency, but a more modern pumping station nearby handles the main load. The surrounding air was a bit stinky, so I was glad to leave it behind.

After a few pleasant miles along the flat, gently curving rail corridor I came to the junction with the CS3 ‘cycle superhighway’ and followed it North towards Barking.

I stopped in the shade of a tree to check my map, and noticed the ground was covered with rotting cherries. Looking up, I could see the tree was absolutely laden, so I used my bike to climb up into it. I stayed there for about 10 minutes while I stuffed myself with about a kilo of delicious fruit. Just behind a high security fence through the trees there was a guard dog going ballistic, but I was pretty confident he couldn’t get out. A couple of people passing by gave me odd looks, but I didn’t care.

I turned for home at this point, but soon left the CS3 to try and find a trail marked alongside what used to be the Royal Docks. I ended up getting a bit lost around the edge of the docklands airport, and the bikeway I finally found was through a dirty and unattractive industrial area, so that part of the ride didn’t work out as I had hoped. I was very glad to get back onto the blue painted superhighway.

I stopped at a shady bench next to a fountain at the East India Dock to eat my lunch, then carried on towards the Limehouse Basin. I was soon on the Regent Canal towpath, and assumed my navigation problems were over until I came to the Islington tunnel and had to negotiate the busy streets of the Angel above. I tried following a woman who seemed to know where she was going, but it turned out she didn’t so I had to rely on my GPS yet again.

The next unexpected obstacle was Camden Lock. The tow path does exist but the fact that it was lunchtime meant that thousands of tourists visiting the markets were blocking every path while they ate. I had to push my bike a long way through dense crowds before the towpath finally cleared.

The final photo is where I stopped for a brief rest on the edge of Regent’s Park, just beyond the zoo. After that the trip home was pretty straightforward apart from the pesky tourists blocking the Abbey Rd pedestrian crossing.

Today I reckon I’ve covered about 40km, so while I’m a bit tired at least I’m not as sore as I was on Monday.

One thought on “Stratford to London”