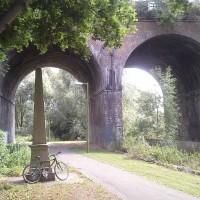 Felicity had meetings organised for today, so I took my bike on the London Overground train as far north as I could get on my Oyster Card, which was Watford High St. As soon as I came out of the station I saw a National Cycleway sign pointing north to St Albans, a bit over seven miles away.


Since my boy Scout troop was called St Albans, it seemed like a good destination. Just out of town I found a marker signifying the point where coal coming south to London incurred a 1 shilling and 1 pence tax. The trail followed the river Colne for a while, but after a while it became a suburban road.

I nearly turned back, but I’m glad I didn’t because it lead me to a serious forest called Bricket Wood. In the middle I passed the “picture house” which once was a home for deprived boys. There were inviting looking trails leading in all directions, but I knew I was a long way from home, so I resisted the temptation.

It was especially difficult not to go and see Potters Crouch, but it would have added several more miles to what was shaping up to be a long ride, so I turned for home just past the sign. I arrived back at Watford just before 1pm, and found myself on the Ebury Way trail, which follows an old disused branch railway to Rickmansworth. There were many attractive cuttings and bridges, and I stopped for lunch beside a private fishing pond.

The trail ended on the Grand Union Canal, so I followed the towpath south. The surroundings were very rural, with marshes, ponds and rivers and woodlands on both sides. I came across one canal boat with an amazing collection of dead bicycles, and a derelict factory with a gorilla swinging from a rusty girder.

A bit further on I came to Black Jack’s Mill, which had water flowing under the verandah. Jack apparently had a bad temper, and used to beat his donkey mercilessly. The building is now a B&B.

I was starting to get a bit tired by this time, and my bum was quite sore, so I was very glad to see the Paddington Arm of the canal, where I had turned south on the Boris bike a couple of weeks ago. Until I realised that this meant I had about 25km to go!

The last couple of hours was a bit of a slog. I was a bit tempted to leave the canal and try and find a shorter way home, but in the end I decided that I didn’t want to tangle with traffic when I was tired, or risk getting lost. In total I rode for over six hours, and I reckon I would have averaged over 10km per hour, so I’ve covered quite a distance.

2 thoughts on “St Albans to London”