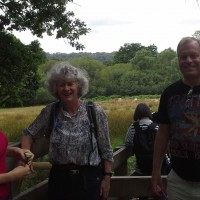 Last night we took a bus from Victoria Station to Southampton and on to the village of Lindhurst where we are staying with friends in their cottage for a couple of days.


We started the day with a huge traditional English breakfast, so a long walk seemed like a good plan. The village is on the edge of the New Forest,  a huge area of oaks, pines and beech trees. There are wild horses and deer wandering around, and paths and roads leading in all directions.

I suspect I would have got hopelessly lost, but Tony’s navigation kept us on track about 98% of the time. His magic device for preventing rain (known as a “brolly”) was impressively effective. After a couple of hours we arrived at a picnic area where the foresters feed the deer so that people can see them. There were several stags with big antlers, but they didn’t cooperate by raising their heads when I took the photograph.

We continued on down small lanes and pathways, many across private land where right of way has existed forever. At one farm a group of locals had ridden their horse and buggies to meet up for a picnic. Eventually we reached Minstead, which is basically a pub, a church, a shop and a few houses.

We had planned to eat lunch at the Trusty Servant Inn, which judging by the large crowd is a popular Sunday activity with the locals. However, when we saw the enormous meals we decided to just have a drink. Afterwards we checked out the local church, parts of which were built in the 12th century. Sir Arthur Conan Doyle and his wife are burried in one corner; someone has left a pipe on his headstone.

As we neared home, we found an old phone box which has been converted to an information centre and library for the locals. My first day in rural England has been very pleasant.

One thought on “Minstead New Forest”