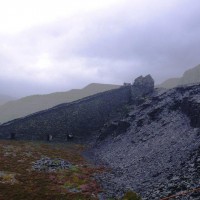 There is a £1.00 ‘sherpa’ bus for hikers which travels around the Snowdonia area, so we were ready and waiting at the bus stop at 9AM.

When we got to the top of the Pen-y-Pass where several of the Snowdon tracks start, Felicity succumbed to peer pressure and leapt off, even though our plan was to continue on to Nant Peris. It had begun raining more and more as the bus climbed upwards, so our first move was to get our wet gear on. Climbing the mountain today would have been very unpleasant,  and fairly pointless because it has been covered in cloud and lashed by strong winds. Our unscheduled stop did give us a chance to check out the various options with the ranger, and luckily when the next bus arrived the driver was happy to accept our previous ticket.

We set off on the Bro Peris Slate Walk, which climbed quickly up from the Llyn Peris (lake) into one of the main old quarry areas. The rain was steady, but the wind was intermittent so it wasn’t too unpleasant. We stopped to photograph a huge slug about to attack my boot; fortunately they are extremely slow, so I survived OK. There was more broken slate just lying around than I have ever seen in my life. After a while we came to a huge incline which used to have rails running down with wagons to move the slate down to the factory.

There are stone buildings in various states of disrepair scattered all over the landscape. Although the area seems quite remote, there was obviously a huge population a hundred years ago when the slate industry was booming. The path followed a 4WD road maintained by a power company that operates a hydro station at the edge of the lake below us.

After a couple of hours we arrived back in civilisation, and began following a network of small paths through the farms. Many of the fences were made with slabs of slate held together by two twisted wires. Sometimes it seemed that we were walking down people’s driveways and through their backyards, but public access across country areas is an ancient tradition here. Every now and then we would encounter a cast iron gate in one of the stone walls, confirming we were on track.

The sun was starting to come out by early afternoon, but we needed to find somewhere to get out of the wind and eat our lunch. An imposing stone church on the edge of a village had a welcoming sign on the gate, so we went in and sat on the wide stone step in the doorway.  All the gravestones I could see were people named Jones, Owens or Davies.

By now we had lost track of the Slate Walk, so we stuck to the roads until we reached the shore of Llyn Padarn. From up in the hills we had watched and heard an old restored miner’s train taking tourists along the shore, so we walked around to where the line terminated and  caught a ride back to the town of Llanberis.

We had been told that an old Victorian hospital was open for visitors during the school holidays, so we climbed up the hill to check it out. Felicity recognised most of the surgical instruments, but there was not much in the dispensary that she would use. Slate miners had some horrific accidents, and lived in pretty unhealthy conditions so the hospital would have been kept busy. At least the patients in the ward had a great view out over the lake.

Our next stop was the National Slate Museum, which is in the buildings that used to house the engineering workshops for the Dinorwig Quarry. At it’s height, the quarry employed over 3,000 men, but it finally closed in the late 1960s. Most of the machinery,  tools and equipment needed for the mine were  made on site, and the huge foundry and machinery were fascinating. A large water wheel at the rear of the building complex (which we were just too late to see), drove shafts that ran the length of each workshop, with pulleys and leather belts driving each machine. Each time the shaft passed through a wall, there was a bearing with oil stains running down below.

We were lucky to get to watch a demonstration of slate cutting. People have tried to invent a machine to do the job, but slate has a grain that only a human eye can see reliably. The guy made it look very easy as he gently tapped along the bottom and the top of a piece, then split it perfectly into two thin sheets. They had to be between five and ten mm thick, and the workers had to produce 128 sheets for every 100 they got paid for, because on average, 28 sheets would get broken during transport to the customer. The demonstrator also showed how to use a blunt knife to make the sheet square and cut it to size. He marked the width with a scribe that sounded like chalk squeaking on a blackboard, much to some of the audience’s horror. I asked him afterwards how he had made the first corner a right-angle because I didn’t see any kind of guide. He replied that it was just practice, and that he had square eyes.

The slate then has to have the edged bevelled so that water runs off instead of running back underneath by capillary action, and finally two holes are punched in one side for nails to go through. The final product is the roofing material that covered many of the Victorian world’s buildings. I was interested to learn that slate is nothing more than 500 million year old compressed mud, which once was on the seabed. Welsh slate is apparently some of the best in the world, but I guess they can’t compete with the Chinese due to the fact that production is so labour intensive.

One thought on “Llanberis Slate Quarries”