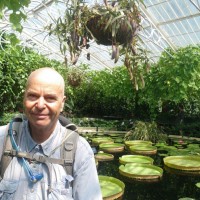 The heatwave was back with a vengeance today, with over 34º recorded in London; the hottest day of the year so far. Both Felicity and I had some work to do, but late morning we headed out to be dutiful tourists.


Kew gardens had an exhibition of edible plants, which I thought would be interesting, so at midday we joined a walking tour lead by a volunteer guide. She was an elderly woman who was clearly very fit and keen, and she had to keep waiting for much younger members of the group to catch up. Felicity asked her confidentially how old she was and she confessed to be 85!

Normally Kew is known for magnificent displays of flowers, but this year the beds are full of every kind of vegetable you could imagine. I was particularly impressed by many varieties of pumpkin that I have not seen in NZ. I was also surprised to learn that the world’s hottest ever chilli was grown in Australia.

The huge Victorian glass houses are probably wonderful places to visit in normal English weather, but they were absolutely sweltering today. They have spiral stairs leading up to balconies where you can see the plants from above, and I suspect the temperatures up there must have been close to 40º!

We climbed another long flight of steps to a treetop walkway, which was actually completely made of steel, and a bit tame compared to similar walkways we have visited in other parts of the world, but still worth the effort.

I had just about seen enough plants for one day when we came across the Royal Kitchen which served George III (the mad one) and Queen Charlotte when they stayed at Kew Palace. It has one of the best preserved Georgian kitchens with an amazing mechanical rotisserie system driven by a fan in the chimney. The guide told us that they usually cooked for about 40 people, but it looked to me that it could handle whole sides of beef or complete sheep.

The palace itself was also fascinating. The building had previously been the home of a wealthy businessman and was built in 1631. When it was renovated recently they left sections uncompleted so we could see the original oak frame of the building. The timbers were not even squared properly; just roughly shaped. Walls were thick enough to allow servants to move about the building without the royal family meeting them in the main corridors and stairways.

The dining room was laid out with a typical meal – mostly meat and poultry and pies with very few vegetables apart from some dodgy looking spinach. There was a plate of potatoes, which the guide told us was a novelty item at that time. Felicity got told off for leaning on the Queen’s chair, and as I was also finding it a strain to stay on my feet we decided to head for home.