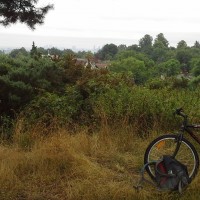 I’ve bought myself a mountain bike, and today I went for my first serious ride. I rode it home from Camden on Monday, but that was only 40 minutes, partly along the Regent’s canal towpath, but mostly along the road.


London traffic is noticeably more bike tolerant than Auckland, even though the streets are often narrow and congested.  Vehicles actually wait behind you until there is space to pass safely. Still, I feel much safer now that I have a helmet to wear.

From our flat in West Hampstead it is several km to the nearest off road path, but I am starting to find routes down quiet suburban streets. This is harder than it sounds because road names often change without warning, or curve off on an angle while the straight ahead direction is a new street.

The heath is a huge open space with grass and forest areas, but sadly only a couple of dedicated cycleways. There were many interesting looking paths with “no cycling” signs at the start of them, but still enjoyed my ride, managing to end up on several illegal trails without actually passing a sign.

By mid morning I had travelled as far north on Hampstead Heath Extension as I had time for, so I headed in what I thought was a homewards direction. When I stopped and checked on Google maps I discovered that I was at the top of Highgate Hill, several km to the east of where I expected to be. I’m not sure how much evidence there is for a ‘sense of direction’, but mine doesn’t  appear to be working well up here in the Northern hemisphere.

I was starting to get a bit anxious about getting home by lunchtime, knowing that we had tickets booked for a matinee performance of a play in the West End. There are quite a few main roads running NW to SE, but not many direct routes south, which is where I wanted to go. I ended up riding through a lot more traffic than I intended to, but fortunately without trauma.

The play we went to see was ‘The Cripple of Inishmaan’ starring Daniel Radcliffe of Harry Potter fame. The role is reportedly taking its toll on the actor, but we thought he was brilliant. I doubt if he needs the money, so he must love his work. This play is the blackest comedy I have ever seen, and I will be on the lookout for any other work by Martin McDonagh.

The bike in the first photo wasn’t quite what I had in mind, so I settled for the Trek hard-tail in the next three. When I had to carry it up the stairs to bypass the Maida Hill tunnel in photo three, I was very glad it’s only half the weight of a Boris bike.

The final photo I took today, somewhere high up on the Heath. In the distant haze you can just make out the Gherkin building in central London City.