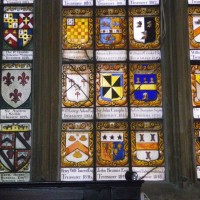 Today’s adventure started and ended at the Chancery Lane tube station. First on the agenda was the London silver vaults.


Felicity was about to take a photo of me in front of the huge security doors when a passing guy told her that the security guards would see her on the CCTV and confiscate her camera. We wandered past dozens of shops in the basement, each behind its own vault door, and admired what must have been millions of dollars worth of silver objects. I saw a price tag on a watch: £35,000. We saw some nice silver plates that looked very similar to the stainless steel plates we use at home for Indian meals. Our credit cards remained in our wallets. As we were leaving, Felicity looked for a “no photograph” sign, and failing to see one, took the risk. The guards at the door who had carefully inspected our backpacks on the way in barely looked up as we left.

The next stop was the Huntarian Museum in the Royal College of Surgeons building. This is one of the world’s most comprehensive collections of body parts and surgical equipment, and historical displays ranging from the early grave robbers who supplied bodies for dissection to modern keyhole surgery. It was interesting to learn about Joseph Lister and how controversial his ideas about infection were just 150 years ago. I found a collection of diseased penises in jars a bit disturbing; hope I don’t have bad dreams tonight. You will be relieved that Felicity respected the photography ban.

It wasn’t part of our plan, but as we passed through Lincoln’s Inn Fields we were so struck by the beautiful buildings that we snooped around a bit. This is one of the areas where lawyers have their chambers because it is near to the courts. We poked our nose into a chapel where a guy was practicing the organ, creating a nice atmosphere while we admired the stained glass windows. I spotted a panel which belonged to Felicity’s great, great, great uncle; Sir John Campbell.

We were walking down Fleet St when we noticed a clock with a couple of figures with clubs next to a bell. Another tourist told us to wait a couple of minutes because it was nearly 4.30, and sure enough, the two figures burst into action, turning their heads and donging the bell. Apparently they are London’s protectors Gog and Magog, who we first met at the Guildhall a few weeks back.

Last on the agenda was St Bride’s Church designed by Sir Christopher Wren after the original was destroyed in the great fire of  1666. The tiered spire which inspired the modern wedding cake was unfortunately covered in scaffolding,  so we didn’t get a photo. In any case, we were there to visit the crypt, which was only discovered after WW2 when the church was almost destroyed by Nazi bombs. We saw the remains of sixth century Saxon foundations, and in a mirror(above Felicity’s head in the photo), the remains of a Roman tiled floor. There were also Roman coins and medieval artifacts including pottery and stained glass melted by the great fire.

It was fortunate that we were near the exit when I heard a woman’s voice say “I’ll just lock up”. When I hastily stepped into view she shouted up the stairs “Hey I thought you said nobody was down there”. A very red-faced guard appologised profusely as we hurried to leave. It was very interesting, but not enough to spend a whole night!